“We're superfans of the show since Season 1,” Kim Holderness revealed about the fandom she shares with her husband Penn for The Amazing Race. The real-life couple and internet personalities are competing in the show’s 33rd season, which just premiered on CBS. “It's one of those things where we always talked about, like we were putting together Ikea furniture, ‘We might do this in The Amazing Race.’ We always joked about it, but never once thought it was something that we would ever be approached to do, or that we could do.” “We're like, ‘So there's the hot people. Where's the old people?’ And it was us,” Penn joked. “We're the old couple now. That's how long we have been waiting to be on the show.” But the couple’s journey to competing around the world had to wait a little bit longer because after production started, the pandemic hit. “We were all in hotels wondering what was going on,” Penn reflected on the moment that production pushed the pause button. “We're parents, we have two children,” Kim added. “It's not just putting ourselves at risk, but then our children. And knowing that if we got sick in another country, what does that look like for our family? So, we needed to feel very comfortable.”

“The good thing is that we were able to finish up the season that we had started pre-pandemic,” co-creator and executive producer Elise Doganieri shared. “We just had to make some adjustments. I actually think some of those adjustments were things that we could implement for the future. So, there were some silver-lining moments that came out of the race in different ways that we adjusted the format just slightly. You'll still have the same Amazing Race, detours and roadblocks, pit stops, check-ins, eliminations, and an amazing cast. But maybe it's improved in some ways, and we can't wait for everyone to see that. It was challenging, for sure.  But with the protocols and the things that were implemented, we started planning six, almost nine months previous to leaving.”

“We had challenges, and I think we adapted and we've come back with some new elements that I think the fans are going to like, just because we've freshened up some of the ways we've done things,” host Phil Keoghan added, explaining that the producers got a private 757 to fly the teams around in for the rest of the season. “It was a very comfortable plane. Everybody was comfortable, it was nice. We didn't have long lines to stand in and all those things that you don't see on the show, but that are very taxing on all of us.”

“Because the teams were all on the same flight with our cast, all the cast and crew were together; we actually staggered the release times,” Elise revealed about the new protocol. “So even though they were on the same plane, their check-in time from the leg before counted for the time that you would check out the next day. Which actually made for a very intense and exciting race, because the teams were actually closer together. But we did not release them at the same time. We wanted to keep it fair, as fair as we could do during these COVID protocols. So, I think you will find that when you watch the show you're going to see a very intense race every single leg of the race, which is exciting.” 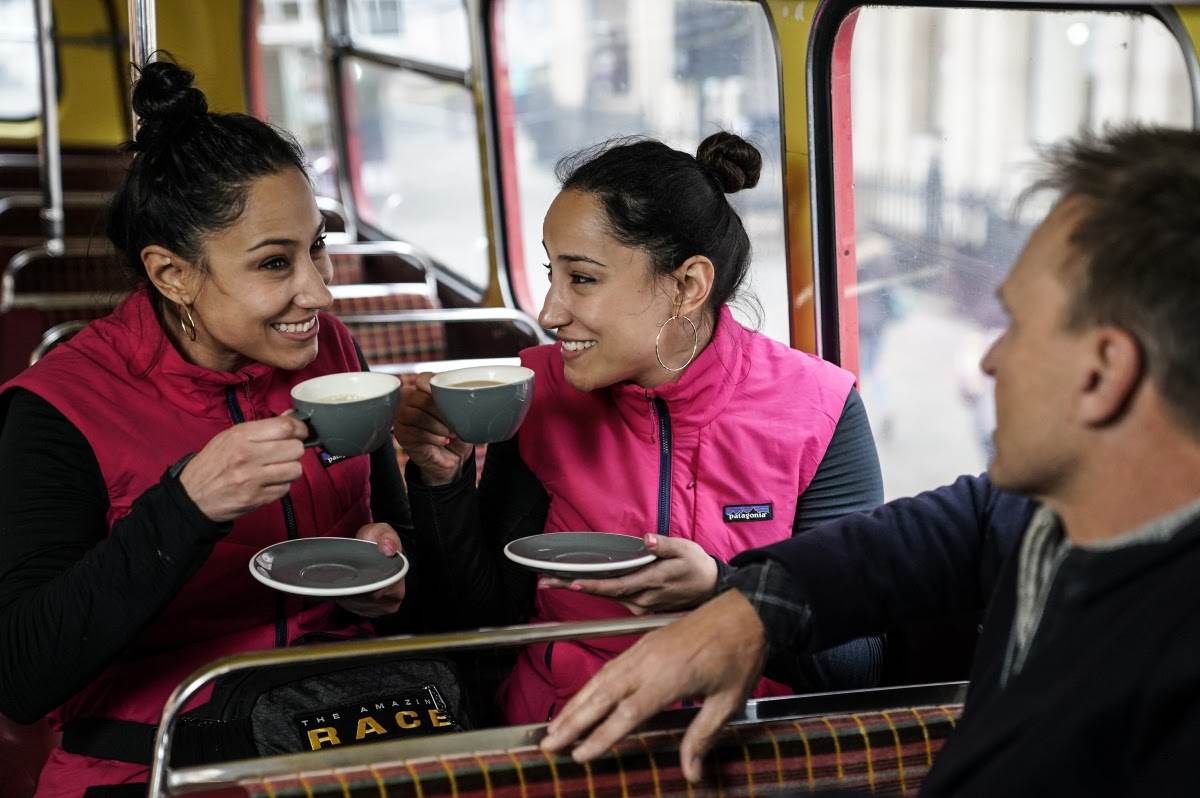 The shared ride experience also made for a closer group of contestants this season. “There's a closeness, there's a bond, it is a special season,” explained radio DJ and contestant Lulu Gonzalez, who teamed up with her sister Lala. “I like to brag about that, because no other season is going to have the experience that we had and how we were feeling while it was all happening.” Cheering the girls on when they started their adventure was Lulu and Lala’s grandmother, who passed away during the pandemic. “We felt like we needed to do this for her, and also represent all those people who did lose a loved one because of the pandemic. And to show that it is okay. It's going to be okay. It is going to be safe to travel again. And we kind of wanted to show the world that life goes on and everything is going to be just fine. And have fun at the same time.”

Experience the fun and excitement of season 33 of The Amazing Race Wednesdays at 9/8c on CBS. The first two episodes premiered January 5th and are available to stream on Paramount+.