The first season of Disney’s Secrets of Sulphur Springs ended on a giant cliffanger and fans have waited nearly a year to find out what happens next. On Friday, January 14th, the hit family-friendly paranormal mystery is back with an hour-long return. Like the first season, it’s full of twists and surprises that will keep viewer’s guessing. 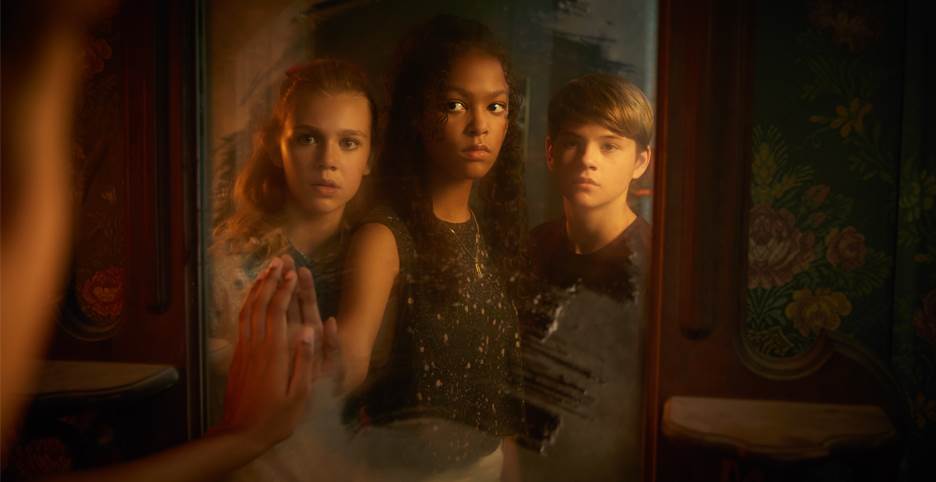 Griffin and Harper team up with Savannah to figure out who is haunting The Tremont. The mysterious old hotel not only seems to be haunted, but also sits above a time-traveling underground hatch, through which Savannah has found a home for herself in 1962. But even more mysterious, Harper has found a girl who looks just like her in 1930, living on a farm on the future site of The Tremont. Who is she? Does answering that question reveal who is haunting the hotel in the future?

Most of the cast are back this season, including Preston Oliver as Griffin, Kyliegh Curran as Harper, and Elle Graham as Savannah. There is one casting change, which is likely to take young viewers out of the story for a moment. Bryant Tardy, who played Harper’s brother Topher in the first season, has been replaced by Johari Washington in his television debut.

One of my favorite aspects of the show is the way it plays with the different time periods. In the double-episode premiere, we not only see the dilapidated hotel in the present, but how it looked in its grandest days in the 1960s. The era is mostly indicated by the midcentury patio furniture, but there’s potential for a lot more fun. In the 1930s, we also get to see the genesis of the hotel, which started as a smaller farm house that was expanded later to create the hotel. There’s a fun Easter Egg nod to the time traveling genre through an H.G. Wells book that becomes part of the plot (Wells is considered the "Father of science fiction" and time travel was a specialty of his writings).

Filmed on location near New Orleans, Secrets of Sulphur Springs is not only tonally different from the usual Disney Channel fare, but also visually different. The three-walled brighly colored studio sets are replaced by a more boxed-in style, something you don’t often see from a kid-focused cable network. But then again, Secrets of Sulphur Springs was originally conceived for streaming and this season, Disney+ will have several episodes ahead of their airdate, giving streaming subscribers an advantage at the beginning of the season.

The winning formula that made Secrets of Sulphur Springs a hit are back in play in season 2. The first season wrapped up the mystery of what happened to Savannah, but also presented new questions that went unanswered. Will we found out all of them this season? Probably not, but we’ll have a lot of fun in the process.

I give season 2 of Secrets of Sulphur Springs 4.5 out of 5 glowing blue stones.

Secrets of Sulphur Springs returns with a double-episode premiere on Friday, January 14th at 8/7c. A larger batch of episodes will also be available to stream on Disney+ that same day.