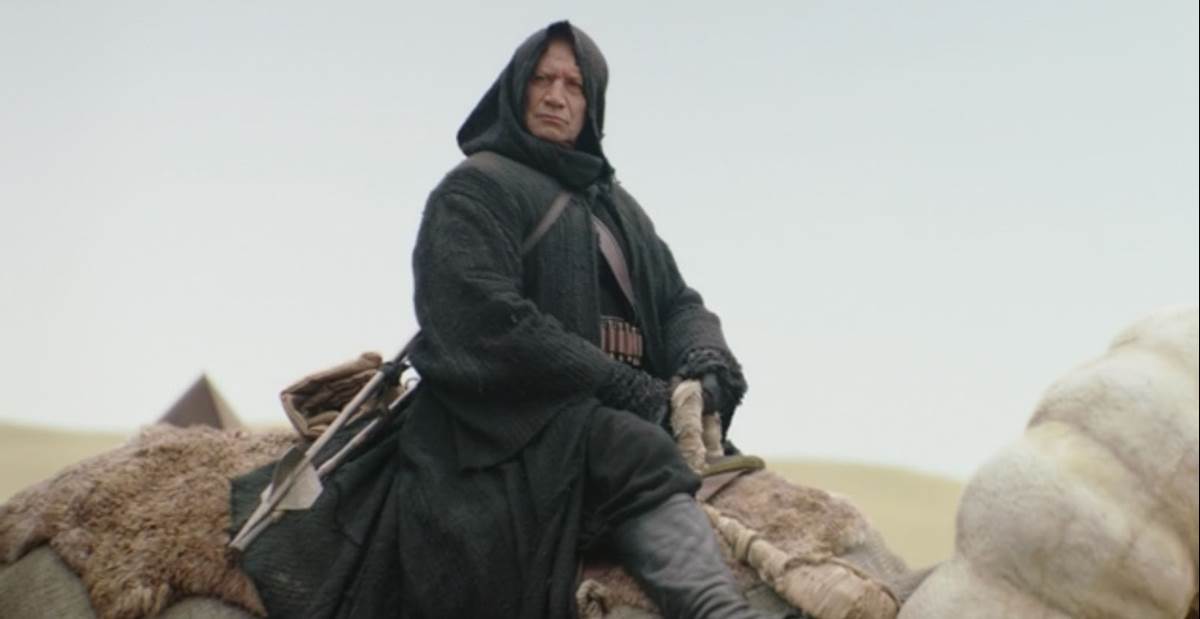 The slow burn continues as we get tantalizing little teases of “new” to go along with a continuation of what’s previously been established in Star Wars: The Book of Boba Fett Chapter 3, entitled “The Streets of Mos Espa.” The episode opens with a local water monger (very welcome guest star Stephen Root of NewsRadio, Office Space, and Coen Brothers filmography fame) asking newly minted crime boss Boba Fett (Temuera Morrison) and his right-hand cyborg Fennec Shand (Ming-Na Wen) for help in dealing with a gang of ruffians who stole some of his wares.

Then instead of busting some heads, Boba hires the gang of street toughs as additional muscle and tells Root’s character to lower his prices– I guess Fett is becoming better at earning respect from his peers, and giving it in return.

Then it’s flashback time, and in the past Boba Fett heads out to Mos Eisley in an effort to deal with the ongoing threat of the Pyke Syndicate, but returns to camp to find that his Tusken Raider friends have been slaughtered while he was away. Back in the present, our antihero is torn from his bacta pod by the fearsome Wookiee bounty hunter Black Krrsantan (Carey Jones) and a no-holds-barred battle ensues in Jabba’s Palace. Eventually Boba’s hired help comes to his aid and the Wookiee is captured, leading to another confrontation with the Hutts, who surprisingly apologize and tell Fett they’re leaving Tatooine because Mos Espa has been promised to another criminal organization– but not before gifting him with a replacement for the Rancor creature killed by Luke Skywalker in Return of the Jedi. The Rancor apparently comes with a complimentary Danny Trejo as trainer, and Fett declares his intention to learn how to ride the powerful beast before the end of the season.

The climax of this episode comes in the form of an oddly low-speed speeder chase after the majordomo through the titular streets of Mos Espa, after Boba and Fennec Shand return once more to the mayor’s office to find that Mok Shaiz has abandoned his post to go work with the Pykes. Here Robert Rodriguez confirms my suspicion that he’s still not the world’s greatest action director, or I’m guessing this action sequence would have felt a little more exciting or better-staged. But otherwise this chapter feels like it’s closing the doors on a couple plot threads (it seems the Hutts were mostly red herrings as the series makes way for the Pykes– and possibly another shadowy syndicate– as the big bad) while opening some new ones. I suspect a lot of viewers are going to be unhappy about writer Jon Favreau’s chosen fate for Fett’s adopted Tusken tribe for a number of reasons, but such is the way of the harsh Tatooine desert… and sometimes it’s not as easy to avoid long-established Western tropes as it is to steer directly into them.

New episodes of Star Wars: The Book of Boba Fett are released Wednesdays, exclusively on Disney+.