Sidney Poitier has passed, and his legacy of cinema excellence is now left for generations to enjoy. This week in honor of a great man and an incredible talent, we look back at Poitier’s 1988 Touchstone Pictures action pic, Shoot to Kill. 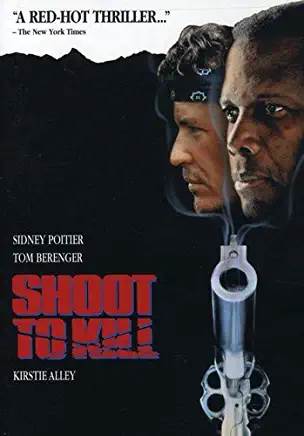 FBI agent Warren Stantin is in pursuit of an elusive murderer named Steve. From a botched arrest in San Francisco, Stantin follows the trail to the remote mountains of Washington State. Fearing that the master criminal has joined a hiking trip of fisherman, Stantin partners with local guide Jonathan Knox to hunt down the murderer.

In the remote wilderness, the fishing group is killed off by Steve except for their guide named Sarah. At gunpoint, Sarah leads Steve across the border into Vancouver, with Stantin and Knox close behind. A final fight on a British Columbia ferry will decide who lives and who dies.

Sidney Poitier makes any film excellent. Shoot to Kill is a standard 80’s action pic, but the presence that Poitier brought to the screen elevates the film beyond the normal faire of the day. There is a certain swagger and strength that Poitier gives Warren Stantin that few other actors could have showcased on the big screen. Viewers will fall under the Poitier spell. Not only does his onscreen presence bring more depth to a character like Stantin, but Poitier, who was sixty years old at the time of filming, acts like a man half his age, and the audience will believe it.

Tom Berenger has a difficult task in keeping up with Poitier, but he also brings his best to the role of the remote wilderness guide who doesn’t mix well with other people. For most of the film it takes place in Jonathan Knox’s area of expertise, but the chemistry between Berenger and Poitier make the buddy cop chase likable. The banter between the two is hilarious, and the fierce independence of each man, gives their trek into the mountains the suspense that the movie needs.

Shoot to Kill is your standard action film, but the tension between Poitier and Berenger as they hunt down Clancy Brown is what makes this movie a star amongst a sea of many copycats.

The way the film addresses racism throughout the movie is quite interesting. When Stantin arrives in the remote town to start his trek into the mountains, many locals question him if he is really and FBI agent. Stantin brushes the questions off, but we finally get an insight into what Stantin experiences when he and Knox encounter a bear in the woods.

Knox is injured and it’s up to Stantin to scare the bear off, which is a success. Knox states that he’s never seen anything like that before. Stantin uses the moment to finally bring out in public the direct and indirect racist moments he has experienced.

Played for humor, but showing a serious issue, Poitier explains to Knox, that since everyone else in this area acts like they had never seen a black man before he wouldn’t be surprised that the bear hadn’t either. What an incredible way to bring to the screen what Stantin, and many black people experience every day.

Kirstie Alley shows she is no damsel in distress, but it would have been better had she got more dialogue to flesh out the character of Sarah. For most of the film, Alley spends her screen time walking along in the woods with little to say.

I had never seen Shoot to Kill before, and with the death of Sidney Poitier I was surprised to learn he had made a Touchstone Pictures film. My first Sidney Poitier film was Sneakers, and I wondered how this legendary actor would fair in an 80’s Touchstone action pic.

It was fantastic. The actors are on the top of their game, and the scenery is beautifully shot. I strongly recommend anyone who is revisiting Poitier’s filmography to checkout Shoot to Kill. Come for the performance and be amazed by the beautiful Pacific Northwest background.

Shoot to Kill gets a ‘Level 4 Streamy Award’. You will want the biggest screen to see this mountain epic.

Next week a look back at 1994’s The Air Up There. Will Kevin Bacon find the next great basketball star in a remote village in Africa?