Abigail E. Disney’s new documentary The American Dream and Other Fairy Tales, may use the company her grandfather and great uncle founded as an example of issues in corporate America, but it’s far from a scathing tale of corporate greed under the leadership of the past three CEOs. Debuting at the 2022 Sundance Film Festival, the heart of the film is really the loss of the American dream. It explores how we as a society got to a point where the CEO of a company can make 2,000 times the amount that their lowest-paid employees do. 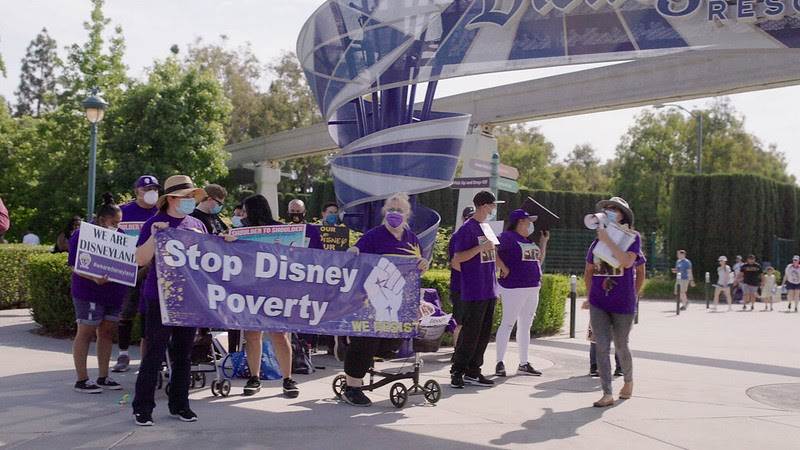 A still from The American Dream and Other Fairy Tales by Abigail E. Disney and Kathleen Hughes, an official selection of the Special Screenings section at the 2022 Sundance Film Festival.
(Courtesy of Sundance Institute)

A Facebook message from a Disneyland Cast Member asking for help getting a raise kickstarts the film, with Abigail E. Disney not actively involved with the company, but feeling compelled to do something. What starts as an email to then CEO Bob Iger morphs into a public campaign on social media and news shows. And while all of this was going on, cameras were rolling. While these segments bookend the film and take up the majority of its 87-minute runtime, they’re really more of a stepping off point to a larger conversation.

To most people, the American dream conjures up imagery of homeownership and climbing ladders to success. What the film does well is parallel the ease of access that existed in the midcentury to achieve that vision (for white men) with the difficulties of it today. Interviews with Rebecca M. Henderson (Professor at Harvard Business School) and Heather McGhee (Author, The Sum of Us) help establish a narrative of how things changed. As you would expect from a Disney, there is supporting animation along the way to underscore the story.

At times, The American Dream and Other Fairy Tales feels like a Disney Parks version of Dream On Silly Dreamer, a documentary film about the end of Disney Animation’s hand-drawn program in 2004. It shines a light on the lives of several Disneyland Cast Members, including a former Cast Member who was with the park when Abigail’s grandfather was still in charge and watched how things changed in the decades since. But it’s by no means an all-encompassing look at life as a Cast Member and doesn’t diversify perspectives across different roles (All of the Cast Members belong to the same union and work in custodial roles). There are a few conversations about life at Knott’s Berry Farm from Cast Members with a second job, but the film is not interested in looking at jobs in the theme park industry as a whole, just Disneyland specifically. For how big the subject is, the narrow focus feels incongruous with the takeaway message.

The American Dream and Other Fairy Tales is well-intentioned and heart-centered, a reminder of what was and can be again, only better. Although Abigail’s public fight has been with “The Bob’s” (Iger and Chapek), what she’s really asking for is change across the board in corporate America. She’s out to prove that a trickle-down economy doesn’t work, and she makes a compelling case for it. The focus on Disney as a corporation feels personal to her, but the issues raised in the film go far beyond one company or one industry. Disney is certainly a good vehicle through which to get the message to the masses, but the film glosses over so many aspects of life as a Cast Member that you feel like it either needed a wider scope of perspectives or the end result should’ve been a different kind of narrative.

I give The American Dream and Other Fairy Tales 3 out of 5 stars.