“I came up with this idea about twelve years ago and I just never told anybody,” Steve Harvey revealed about his new unscripted ABC series Judge Steve Harvey. New episodes air on Tuesdays at 8/7c and the star and creator recently joined Showrunner/Executive Producer Myeshia Mizuno at the TCA Press Tour to share behind-the-scenes stories. Steve Harvey kept his dream of being a TV judge to himself until ABC executives pitched him a scripted sitcom, a format he didn’t want to return to. They asked him what he wanted to do and he explained his concept. 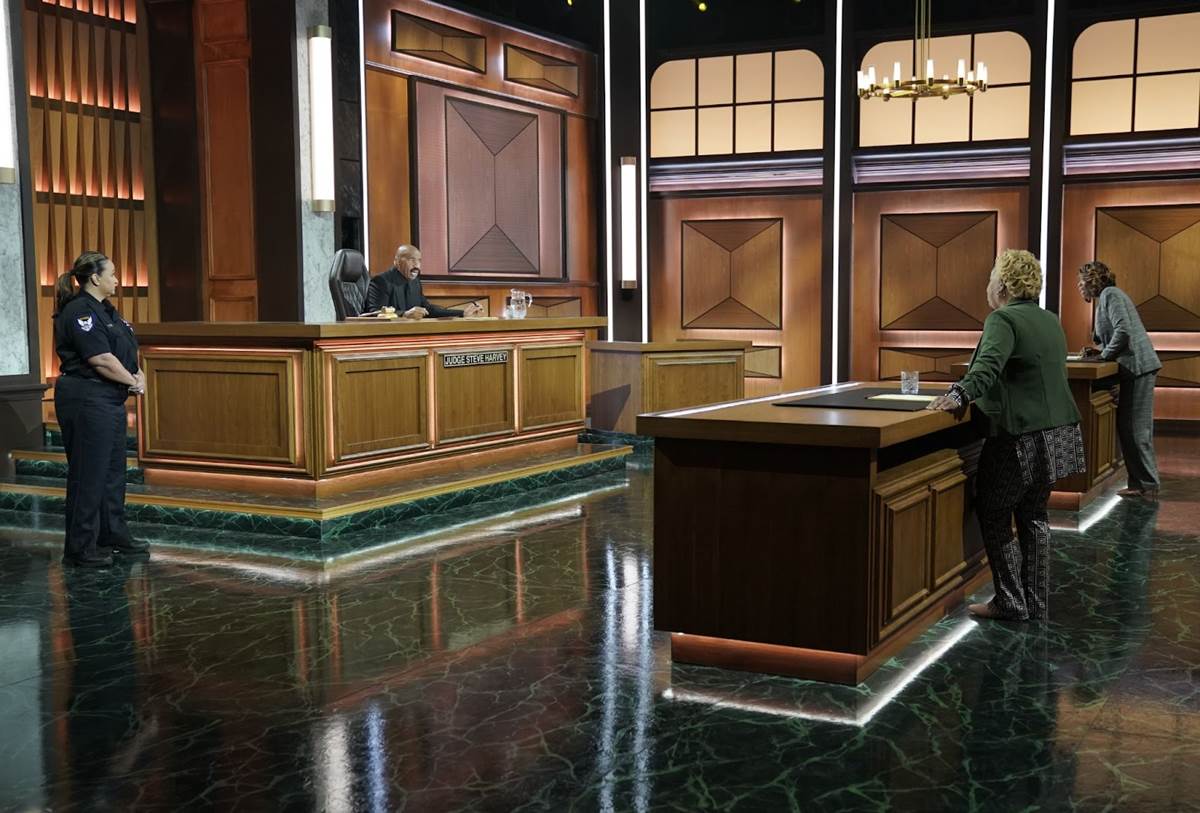 “I told them I wanted it to be funny, I wanted to be insightful, I wanted it to be not about the verdict but about the story,” Steve Harvey recounted his pitch. “And the next day they green-lit it. And then we started this search, but the search was very short and quick. I called up a friend of mine named Terrell, who's been working with me for twelve years, and I said, ‘Hey, man, I've got to find an executive producer for this show.’ And he said, ‘I've got the perfect person for you — Myeshia Mizuno.’”

Myesha Mizuno was no stranger to working in televised court cases. “I started with Judy in the early days,” she explained. “I was with her, like, Season 5, so that tells you how long I've been doing court. And I've done everything from Judy to Divorce Court, created Money Court for CNBC, Paternity Court, Couples Court, so court is in my blood.” For Myesha, what sets Judge Steve Harvey apart from other TV judges is his investment in the stories that are brought to him. “Judy doesn't care about your story, she wants the facts, get to the point, and get out. And that's what makes her Judy. Here, the difference is we take the time to understand the story, which, I think, a lot of times explains why these people get into the situations they get into it. And that, along with Mr. Harvey being able to weave how they're telling the story and then come to a summation and verdict, is what's going to set Judge Steve Harvey apart from everything else.”

“Other than telling ABC I wanted the show, the next smartest thing I did was going to find Myeshia and then just realizing after the first session that I didn't need to talk to anybody else because she's absolutely brilliant,” Steve Harvey gushed about the dream team with Myesha Mizuno. “I think it's a natural progression to have Mr. Harvey as a judge,” Myesha shared. “From all his years of everything, from his standup to the radio to his talk show to sitcom as well, this is a natural progression. And one of the wonderful things about Mr. Harvey is him being able to speak on so many things and being able to relate to all types of people, and that's why we know this show is going to be a success. The combination of what Mr. Harvey brings and just the plethora of stories that real people have. Reality is stranger than fiction, and we see that coming into the courtroom with so many stories and the things these people say and believe and understand or think.”

For Steve Harvey, who doesn’t have any legal authority outside of the show, his verdict is really his opinion. “Just because it's the law don't make it right,” he said. “We're doing small claims court where I'm able to find humor in most of it. It's a lot of heartfelt stuff that we're doing and a lot of stuff that's, you know, you see families that are not mending or healing behind this, and you see friendships that might not be friends anymore. I mean, longstanding friendships go away because of money, and it's always money. But a couple of times, Myeshia and I have found in the story that sometimes it wasn't the money. It was somebody wanted the person to feel remorseful for losing their friendship or remorseful for losing their family member, and sometimes we get to solve that, too.”

While humor is a major component of the show, it’s really the heartfelt connections that make it special. And for one plaintiff, it led to a job for a young photographer named David. “He came into the show and he just reminded me so much of me,” Steve Harvey shared. “This guy was trying to get it right, but he was just making small decisions that affected his future. And I ended up giving the kid a job on the show. And he came and he shot the show as a photographer… This young kid was 26 years old. I started in comedy at 27. And he just needed somebody to believe in him. He was a good guy. He could really do the work, but he just made a mistake with this one customer. And I ended up fixing it for him and then giving him a job on the set, on the real, live set. So, yeah, it works out.”

Catch new episodes of Judge Steve Harvey Tuesdays at 8/7c on ABC. New episodes stream the next day on Hulu.