Inspired by Disney’s animated classic Alice in Wonderland, Disney Junior’s newest series Alice’s Wonderland Bakery welcomes young viewers back to Wonderland for new adventures with the great-granddaughter of Alice. “We really wanted to make the connection between the 1951 Disney feature and our show,” executive producer Chelsea Beyl explained at a TCA press conference for the new series. “We wanted to include a lot of that Mary Blair influence of the curvy shapes and the beautiful colors. The movie is very dark in palette, but I think even some of our framing shots are straight out of the movie. Colors and shapes, and even if you look at Alice’s outfit, she’s got the blue chef’s coat, the white apron, the bow. It’s a different look for a modern Alice but it’s very much reminiscent of original Alice.” 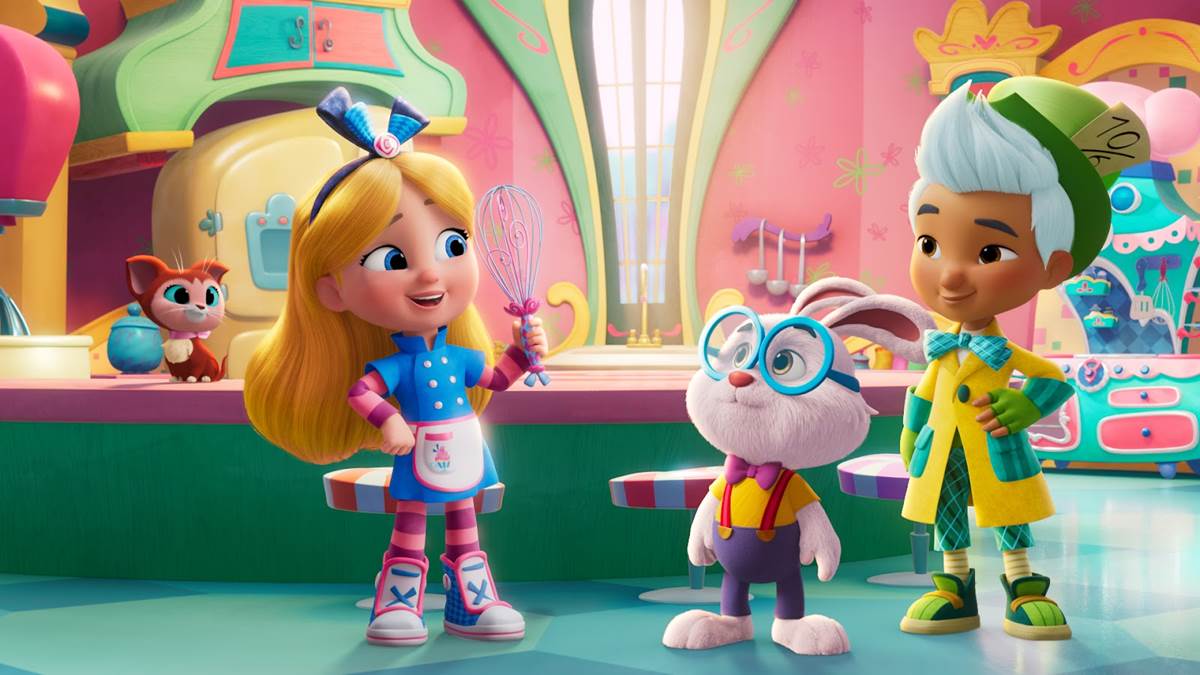 The series includes a few recognizable voices as new characters populating modern-day Wonderland, including Donald Faison. “I'm a huge fan of the original movie,” the Scrubs alumni shared. “I felt like it was really dark so when I found out that they were making a version that is more kid-friendly and they were interested in me being a part of it, I jumped at the opportunity. Personally, I'm just really excited to be able to sing for y'all because I never get that opportunity in the first place… I’m really happy to play the March Hare, Harry the March Hare, I should say.”

Former Saturday Night Live cast members Bobby Moynihan and Vanessa Bayer voice the duo Tweedle Do and Tweedle Don’t. “Tweedle Don’t is the safe one,” Moynihan said. “He's the one that tells you not to do things, while Tweedle Do is kind of the one who’s like, ‘Do it, do it!’ Which I think in real life is possibly the complete opposite of me and Vanessa Bayer. It just seemed like fun to play. And I love Disney, and I love Vanessa.”

The love of Disney was also felt by Eden Espinosa, who voices the new Queen of Hearts and was previously heard in Rapunzel’s Tangled Adventures as Cassandra. “I grew up going to Disneyland and I worked at the park for many, many years and had the good fortune to go on and do a fireworks show, be the voice in the sky, and that created a lot of amazing opportunities with the Disney family,” the veteran of stage and screen shared. “And now, diving into animation is such a dream come true for me. So to be able to collaborate with such a creative and amazing company is a blessing.”

Voicing the title character is Libby Rue, who's been acting in theater since she was 5. “I was just so excited when I got this audition because I think Wonderland is such a great world to be in,” Libby said. “Alice is just so kind… When she’s baking, she gets to cheer up her friends when they're having a bad day and she gets to bake for all of Wonderland. And that makes her happy and it makes people around her happy. And I think that's such a great story for little kids because it tells you that when somebody’s having an off day, there's always a way to cheer them up.”