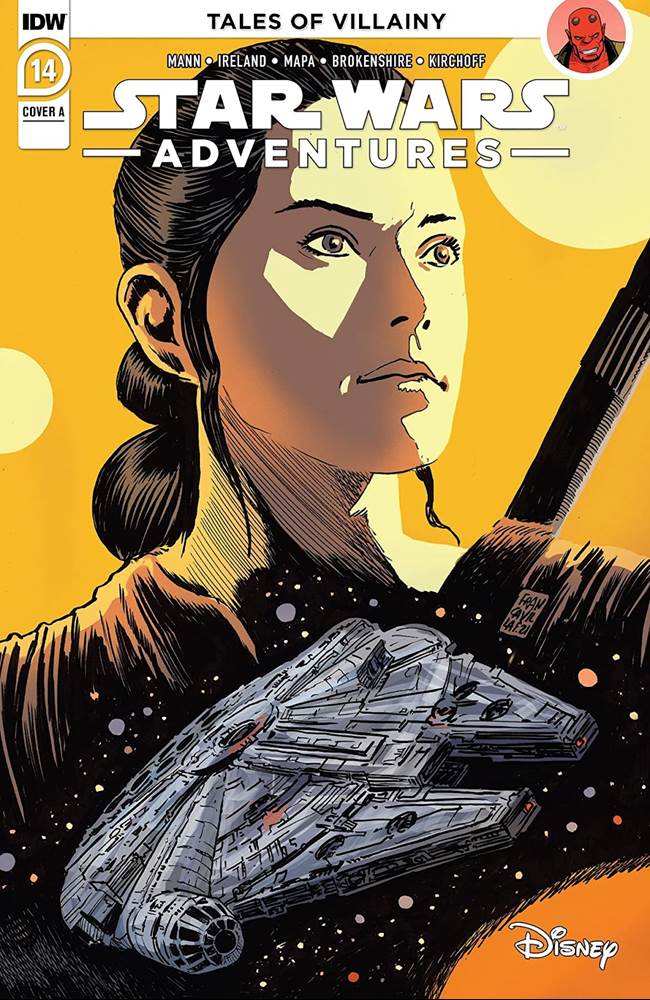 For the past couple of years here at LaughingPlace.com, I’ve been reviewing each and every issue of officially licensed Star Wars comic books to come out of the current canon… except one. Star Wars Adventures from IDW.

Star Wars Adventures launched in 2017 and I have to admit I’ve always kind of written it off as a “kids’ comic,” not bothering to pick it up along with my copies of Marvel’s now-long-running Star Wars, Darth Vader, Doctor Aphra, and the other titles that I’ve enjoyed so much this past half-decade. But I’ve heard good things about Star Wars Adventures and its bite-sized anthology-style storytelling, and the creative teams involved have certainly established themselves well enough in the Lucasfilm Publishing pantheon to earn having their output appraised, at the very least. With that in mind, I’ve decided to add IDW’s monthly comic to the list of regular Star Wars releases I’ll be reviewing. I’m going to start with issues #13 and 14 of Star Wars Adventures’ second volume, which were released on December 29th and yesterday (February 9), respectively. This seems like a good place to begin, because this pair of issues contains a two-part Rey story entitled “Repair Stop,” in which the crew of the Millennium Falcon (including Finn, Chewbacca, and BB-8) are forced to make an emergency landing on a backwater planet to obtain a part that burned out in the legendary ship’s engine. Their passenger, the smuggler Moebin Faltus, needs transport to the planet Prahvin in exchange for information about his remote sector’s smuggling operations for the Resistance. Once they’ve landed, Rey and Moebin search a local bazaar for the part they need while Finn and Chewie stay back to repair the Falcon. One run-in with bounty hunter Kief Varris later, and the story turns into an extended action/chase sequence with Rey and BB-8 stowing aboard Varris’s ship– a former Lambda-class Imperial shuttle. Written by George Mann (Star Wars: Myths & Fables) and illustrated by artist Butch Mapa (Marvel Action Avengers), this tale takes place between the movies The Last Jedi and The Rise of Skywalker– before Rey reforges the Skywalker lightsaber– and fits right in with the overall tone of the Star Wars sequel trilogy. 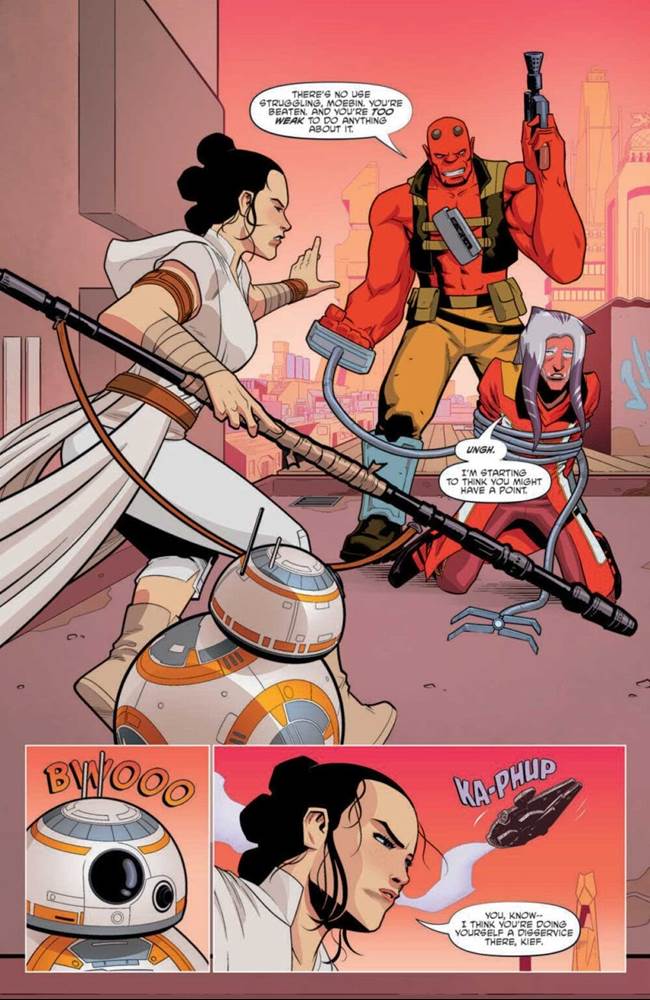 The second story in #13 (written by Queen of Bad Dreams creator Danny Lore and drawn by The Spider King’s Simone D’Armini) concerns a young girl who lives on a “rarely thought about and barely named” planet where Darth Vader and his Imperial stormtroopers show up to raid an ancient Jedi temple during the Galactic Civil War era. The girl works with a steadily dwindling group of devoted archivists who want only to preserve the temple and its contents, and they do their best to protect it from Vader’s destructive intent. I thought this was a fairly haunting, gorgeously rendered story about the Dark Lord of the Sith’s ruthlessness when there’s something– or someone– standing in the way of what he wants. In #14, we get a tale concerning another young girl named Vroma, this time on the planet Hon-Tallos, who is repeatedly assaulted by bullies whenever she tries to take one of the wild berries growing near her town home to her mothers. Enter Nihil agent Deva Lompop of the long-lived Shani species (Deva will go on to become a bounty hunter a couple hundred years later in the timeline), who helps Vroma deal with the bullies, though she quickly proves to be one herself thanks to her allegiance with the Nihil. 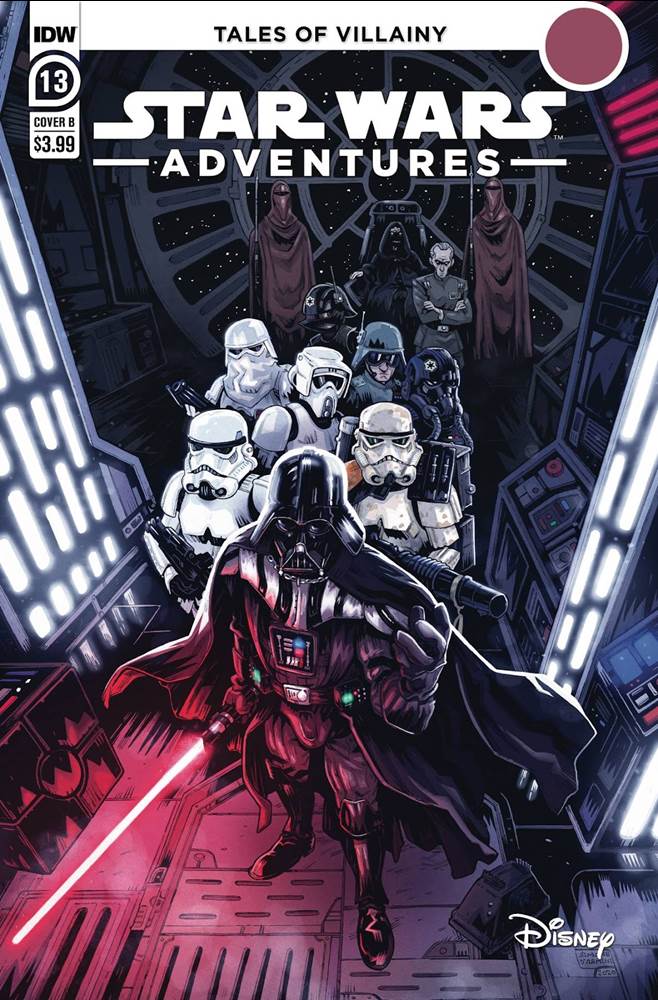 I really enjoyed checking out these issues of Star Wars Adventures, and I’m definitely looking forward to more coming down the line in the future. I love how the structural nature of the book opens it up to including just about any character and era from the ever-expanding Star Wars universe (it’s honestly a breath of fresh air to revisit Rey and friends again after Lucasfilm shifted focus to The High Republic and New Republic eras in the wake of the sequel trilogy), and the fact that the stories themselves can (and are almost necessitated to be) self-contained means they can focus more on the personalities involved and how they relate to each other. Like I said, what drew me into Star Wars Adventures in the first place was good word-of-mouth and the impressive list of talent who have contributed to the comic– like The High Republic author Justina Ireland and The Once and Future Queen co-creator Nick Brokenshire, who wrote and illustrated that last story– so as long as this high level of quality remains consistent I really don’t think I’ll come to regret that choice. 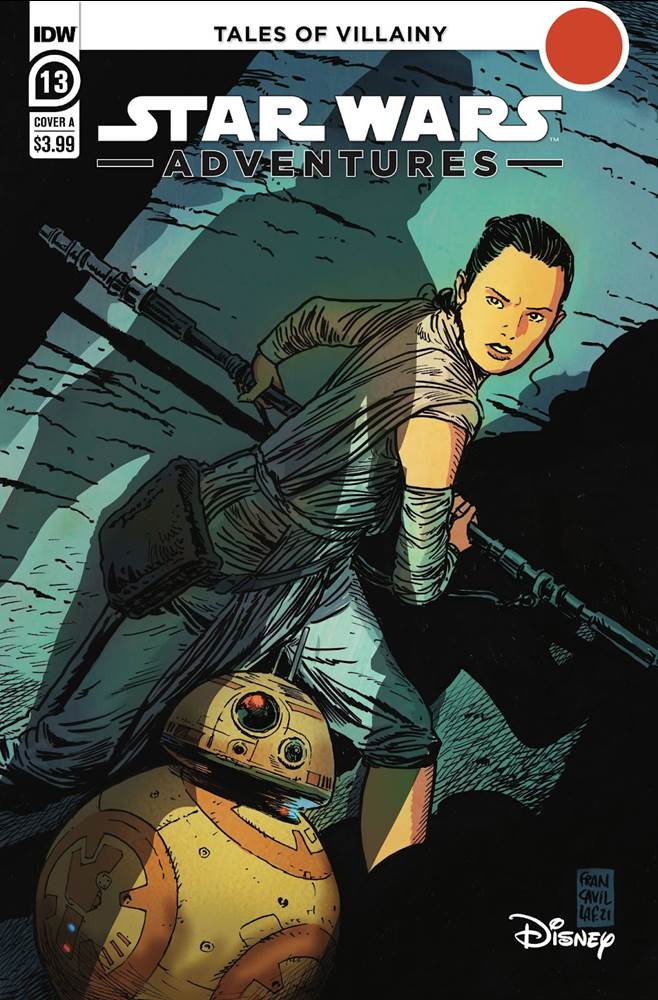 Star Wars Adventures # 13 and 14 are available now wherever comic books are sold.