BritBox’s new series Sister Boniface Mysteries debuted on February 8th with the first two episodes in North America ahead of the show’s United Kingdom premiere next month. With so much demand for the Father Brown spin-off, the streamer announced during a TCA presentation that it’s already been renewed for a second season, set to film this summer. Whether you’re new to this world or have been an avid follower through the more than 100 episodes of Father Brown, Sister Boniface Mysteries makes for a perfect place to start. 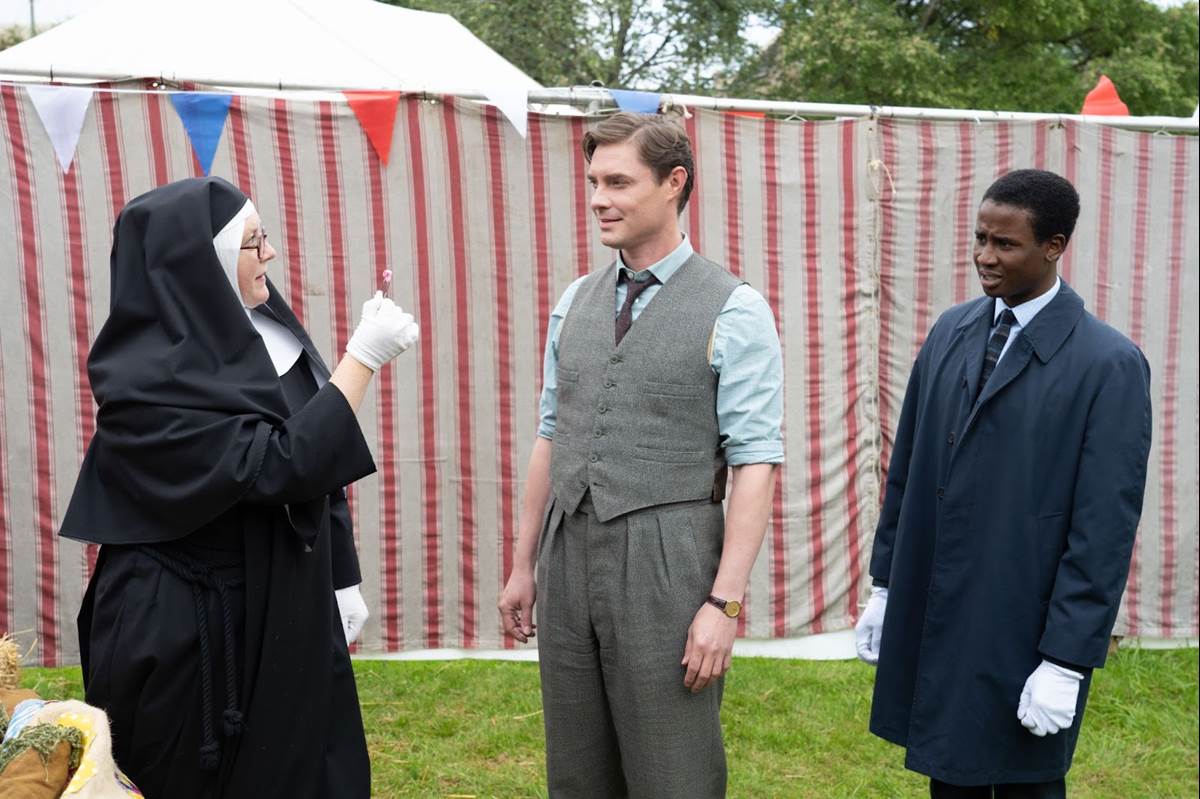 “I get to be like the audience going into the world of Great Slaughter,” actor Jerry Iwu explained about his character DS Felix Livingston, who is new to Father Brown viewers. Another fresh face in this world is Max Brown as DI Sam Gillespie. “I think we started on Episode 4 or something, so we were out of sequence,” Max shared about his first day on set. “And we had a funny morning, I think, kind of all discovering our relationships on camera and our chemistry, and luckily there were sparks and immediately we kind of fell into our characters and our relationships.”

For Lorna Watson, stepping back into the habit to recreate her character from Father Brown led to an unintentionally funny moment on set. “Our director of the first episode actually, Paul Gibson, I got out of the car one morning and I said hello to him and he said hello. He did look a bit confused and I walked off,” she revealed. “And then about a few hours later he came over and he apologized because he didn’t realize it was me because I had my hair out and he just had no idea what I looked like as a human being rather than, you know, in character. It was really funny.”

Standing in for the fictional town of Great Slaughter are real locations. “The actual convent we use is a school,” producer Will Trotter explained. “It’s called Princethorpe College, which is actually where my kids went to school because I live in Warwickshire near the Cotswolds. Most of the show is shot in the Cotswolds, which is similar from Father Brown, so we have all these fantastic churches, big homes, big, beautiful rolling countryside, fantastic. And it’s kind of timeless so it doesn’t really matter if it’s the ‘50s or ‘60s because you’re dressing with ‘60s stuff, but all the stone is the same and the architecture is just beautiful and timeless. It was all done in the 16th century and so on. Having said that, the church — the convent that I was talking about, Princethorpe College — was a convent and there are nuns buried in the ground, and that’s why it’s so authentic. The chapel that’s in there and all the stained-glass windows, it really is an authentic convent.”

“It’s such an important set,” Lorna added about how it helps round out her character. “It’s such a big part of who Sister Boniface is and it was really exciting actually to film. We did lots of filming there and it was just really lovely to have her in her natural habitat and around other nuns. Not just at crime scenes, but to see where she goes to bed each night and where she has her crime lab, of course.”

While Sister Boniface Mysteries is set in a different decade, Will Trotter assures viewers that the tone is still there. “Moving to 1960s, we give a whole new flavor yet have the same kind of sensibility, which is warm at heart but still has a gripping crime that’s full of wonderful characters,” the producer shared. “And these guys, I mean, they’re just screen gold,” he added, referring to the cast.

The first two episodes of Sister Boniface Mysteries are now streaming exclusively on BritBox, with new episodes added on Tuesdays.