In a relatively recent boom of Disney giants turning to publishing books to share their stories, Disney Legend Jim Cora joins the fold with Not Just A Walk In The Park. 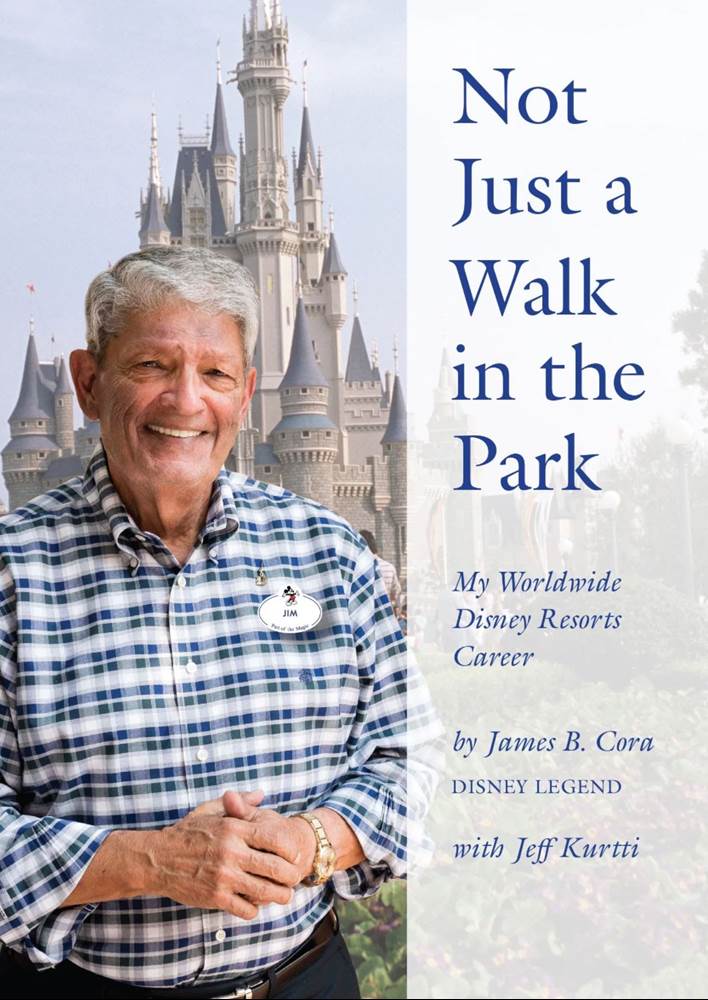 Not Just A Walk In The Park is the never-before-told, behind-the-scenes story of Disney’s pioneering and triumphant global theme park and resort expansion from Jim’s perspective. On June 16, 2016, Shanghai Disneyland Park, located in Pudong, Shanghai, opened to great fanfare and acclaim. Disney Chairman and Chief Executive Bob Iger called the world's twelfth Disney Park “one of the proudest and most exciting moments in the history of The Walt Disney Company.” But a short three decades before, there were only two Disney parks―both in the U.S. How this unique entertainment enterprise expanded and was embraced all around the world is one of the most ambitious and successful, but little-documented aspects of The Walt Disney Company’s history. Jim has now stepped in to plug the gap.
Jim Cora joined Disneyland Park as an attractions host in 1957 and retired as chairman of Disney International 43 years later. Jim held positions of increasing responsibility throughout his lengthy Disney career and led various pioneering and influential Disney initiatives, including the “Disney Way of Leadership” program in 1971. Jim, like Walt Disney himself, was the right combination of experience, enterprise, curiosity, and cultural complement at just the right time and place.

Not Just a Walk in the Park is part memoir, part cultural history, part documentary. Jim tells his story, with the help of prolific Disney history author Jeff Kurtti, at a conversational pace and covers content equal parts personal and historical, as well as lessons that readers can consider and carry forward into the future in their own lives. It is the first-ever documentation of Disney’s rise as a worldwide powerhouse in destination recreation and cultural export; and explores the circumstances, events, and individuals who brought it all to life. It is a one-of-a-kind recollection of a previously unknown aspect of the wide, wonderful world of Disney and how it became what it is today.

Jim’s story is filled with remarkable information, insight, anecdotes, and reflections of places, people, projects, problems, and ultimate successes. It is fascinating, revealing, candid, and occasionally humorous. There are some great memory-lane photographs featured in the middle of the book that include moments captured from Jim’s childhood, Disneyland in the 1970s, the Tokyo Disney training center team, Euro Disneyland, wedding photos, Disney anniversary photos and more.

Not Just A Walk In The Park is a fond testimonial to all that is The Walt Disney Company, but also to Jim Cora himself. Jim passed away on March 21, 2021 and Disney fans are lucky to now have his adventures immortalized in such a personal, professional and practical way in this book. Jim, like many others, live on through these stories.

One of my favorite parts of this book is Jim’s sharing of his first encounter with Walt: a chance early morning meeting in Disneyland pre-opening. Walt asked Jim what he was working on, and Jim advised Walt of his plans to come up with a consistent training program for Disneyland cast members. Walt referred Jim to “University of Disneyland” founder, Van Arsdale France. The rest, as they say, is history.

Not Just A Walk In The Park is also a heartfelt time capsule. Many moments are shared therein that, without retellings like Jim’s, would be lost. The below excerpt is just one of many great examples of the thrilling fusion of memory, history, storytelling and vision for moving forward that sets this book apart from other Disney history books. These melting-pot moments make Jim’s book a must-read for Disney fans in this generation and the next.

“[The morning after Walt’s death], Dick Nunis called an “all-hands” meeting. It was a rallying cry, a call to action, an admonition to the great culture and the clear philosophies Walt had left us in Disneyland. The park still opened for business, and the flag was not flown at half-mast, because Walt was still everywhere in the place. We carried on for him, for his memory, for the star he created that still shined… and that we could all still wish upon.”