As Orlando gets ready to become Frozen with a two week run at the Dr. Phillips Center for the Performing Arts this week, I had the opportunity to speak with F. Michael Haynie who brings Olaf to life on stage. As no stranger to iconic characters, Haynie has brought the munchkin Boq in Wicked, candy-obsessed Augustus Gloop in Charlie and the Chocolate Factory, and Quasimodo in The Hunchback of Notre Dame to life and has now been the person behind Olaf for almost 300 performances with no sign of stopping. Going into this chat, I couldn’t stop telling people that I was going to be talking to Olaf and watching their faces and I do have to admit that, when the call connected, I most definitely had some butterflies in my stomach. But, what started as a Q&A call quickly turned into a fun conversation. Haynie started off talking to me about their love of Star Wars, which immediately made me want to head to Star Wars: Galaxy’s Edge and get some Blue Milk with them.

Starting off, we discussed what it was like to portray one of the most iconic characters since Mickey Mouse (my words).

“It is a great honor and horrifying at the same time, being part of this amazing character is an important and special privilege.” Haynie went on to talk about how Olaf is continually evolving and that, with each of the past actors from the great Josh Gad, Greg Hildreth and Ryann Redmond (both portrayed on Broadway), everyone's favorite snowman has taken on a little bit of each of those. I must say, speaking with them you could tell the love of this show, Olaf, and everyone around the world that has helped bring him to life.

Moving into the show itself, I asked about a favorite moment during the show.

“My favorite moment is actually an offstage moment, about 55 minutes in is the first time Olaf takes the stage and as I approach from the wings I see Autin Colby (Hans) and Jeremy Morris (Duke of Weselton) and ask about the audience. I then go and do my 5 minutes of In Summer then go off stage and see Caroline Bowman (Elsa) as she is about to go out and perform Let It Go and it is just a small thing but it is like passing the baton.” Just hearing them talk about how much of a family the cast is was amazing and Haynie is so humble. At no time did I feel like I was speaking with a star of one of the biggest shows touring now but someone who is part of a team and so very passionate about the arts.

The topic of the shutdown and being back on tour came up and I asked about how it feels to be back and the changes.

“One of the things that we love is looking out into the audience and seeing all the masked faces. We realize that for many of the kids this is their first live show and just the fact that they are making the effort to come out we are thankful for and that is part of making the magic happen.” 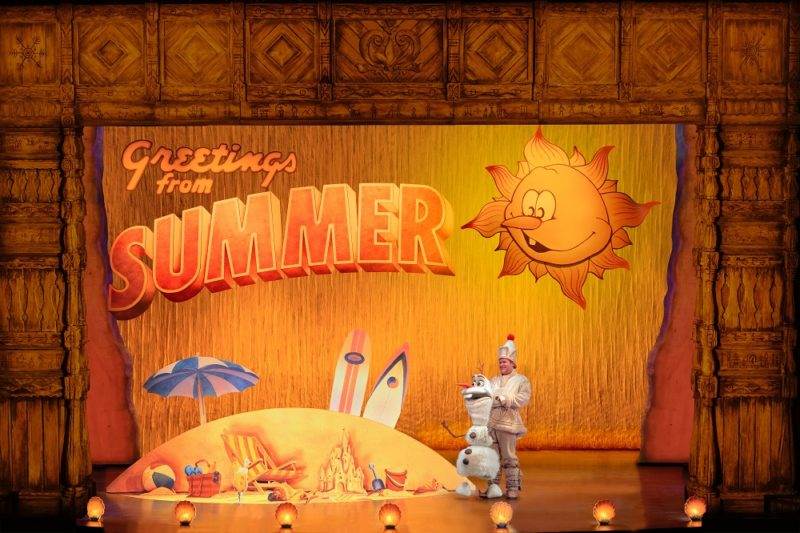 While talking about Olaf, Haynie let me know that, when they saw Frozen 2, the first thing that happened was a call to have something added to the show. Now, they wouldn’t tell me what it was, I did get it is just one word and a true laugh out loud moment from the film, so keep an ear out for it.

Disney’s Frozen opens at Dr. Phillips Center for the Performing Arts this Thursday for a two week run — but also make sure you check the calendar for the North American tour for a date near you.