Maybe it’s the start of something new because we’re in the Big Apple, back where everything began. As the bus arrives in the city, Sam is grinning about “that [New York] smell” and looks like she’s really entering her element. James is not as thrilled, but he’s happy to see her enthusiasm for her return. 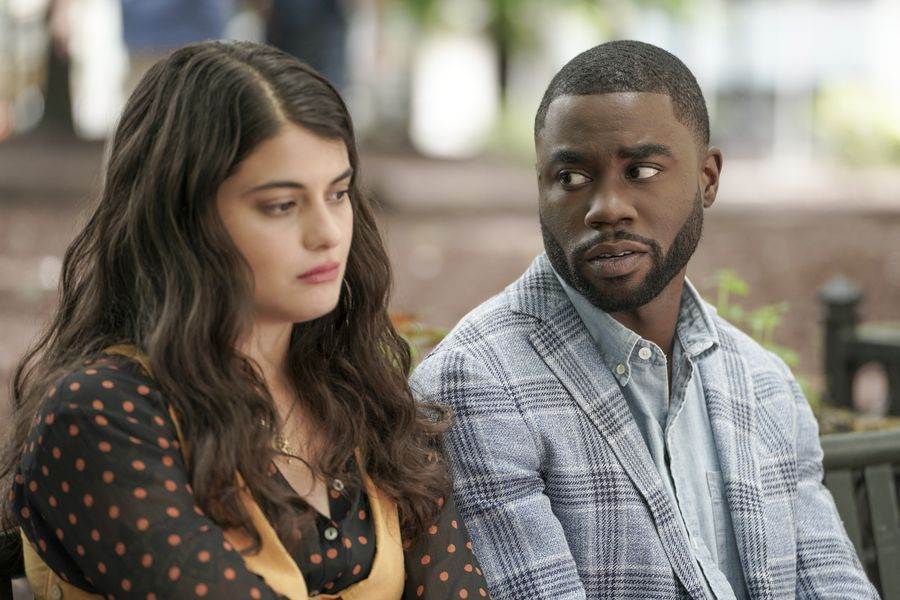 Sam’s experiencing a lot of half memories, but some highlights are coming forward as she gives James the New-Yorker-Sam tour, including a bird bath she peed in. The pair approach a bench and Sam feels uneasy, something happened here that was unfortunate, but she can’t place the moment. James normalizes the sober sensation of times and memories forgotten, and shares that it’ll probably come back to her at some point. The pair part ways: Sam goes to her interview and James ventures to pitch his sobriety app.

Back in Malden, Olivia and Stephanie explore a baby bank online portal. While Stephanie is immersed in all the peculiar details from this sperm bank’s site, Olivia is texting Sam. As we’ve learned, there’s a bit of grief from Stephanie’s given to her wife’s dedication to sponsees. While listening to a potential sperm donor's voice, Olivia gets distracted again, but explains she has to stay attentive to her sponsees because it’s her job. Stephanie responds back with a particular edge, “It’s literally not your job,” and she huffs as she takes their floofy cat, Josh out of the room, “I work off of his vibe.”

In the offices of Smug Media, a quite brazen version of Nathaniel welcomes Sam into his somewhat uncomfortable office.”That thing you sent me is brilliant. We would never publish it here, but submit it somewhere smarter,” he sums up everything Sam needs to know in just these few statements, but there’s a lot of episode left. He continues to explain that Smug needs a “woman’s voice” that’s “a bit b*tchy, but not snarky.” Sam, feeling in need of this break, plays along and says she’s up for that role, even though it’s a reductive position to be considered for. Continuing to be a very unconventional and borderline inappropriate interview, Nathaniel raises the question, “Was I your bottom?” Sam summarizes that a lot of people ask that about her sobriety, but essentially explains that there were a lot of things that lead to her lowest point; it wasn’t all about Nathaniel.

We’re given a brief moment to check in on James as he’s waiting in another bright New York City office. He gets called up for his pitch, but they’re wondering about the location of the rest of his team. Impressively so, James shares he did all of the work for his app by himself. It’s his life’s work. Later, we watch James finish up his pitch in front of a large and daunting room of business execs. He holds himself well as he presents the app he created for sober people to use as a social media solution for those difficult times in between meetings. As he completes his presentation, he is told they wanted it from the start. It’s a matter if James is ready to sell.

Back in her NYC routine, Sam bumps into a familiar hot dog guy – who assumed she was dead – and finds a hundred dollar bill in her pocket. Clearly not her cash, she calls her mother to extend a thank you, however Carol wasn’t the one who sent it. “Did you give my daughter money?” Carol questions her boyfriend Bob back in Malden, “Why would you give my adult daughter money without asking me?” He doesn’t quite see the problem with tossing her some cash for her expensive New York journey, but Carol remains frustrated. Towards the end of the episode, we revisit this couple where weirdness still permeates. He begs Carol to open up and she cries, “You’re subbing in for someone who isn’t here.” Bob holds his girlfriend tightly, now understanding that she still mourns the loss of her husband and Sam’s father and his role is a bit more complicated in this family than he thought before.

Back to the interview from hell, Nathaniel calls Sam and suggests she joins in on a post-work hangout to get to know the team better, “These are the kind of people you gotta vibe with to get the job.” Sam seizes the opportunity to get to know her potential co-workers, but who knows at what cost?

Meeting them all at a bar, Nathaniel announces Sam’s sobriety before she even has a time to sit down. Suddenly, the cultural events job he offered her earlier in the day is being referred to as a “party reporting job.” An alarm goes off in Sam’s head and she inquires further. It would be a job that would be great for someone sober because Topher, who held the role previously “partied a little hard” and didn’t turn stuff in as a result. Ignoring the fact that Topher’s life went downhill and he’s now offering the job to a recovering alcoholic, Nathaniel ignorantly says it won’t be bad for Sam: “Cause you’re over it.”

Sam leaves the bar in the most triumphant fashion; she knows her boundaries now and she’s not about to accept a party reporting gig. Sitting back on the vaguely familiar bench, James joins her. “This place doesn’t feel good for me,” she shares. Why does she feel the need to be back in New York City when she was never really present there in the first place? A moment passes for Sam’s huge path-changing revelation, and suddenly Sam remembers: She found out her dad died on this bench. 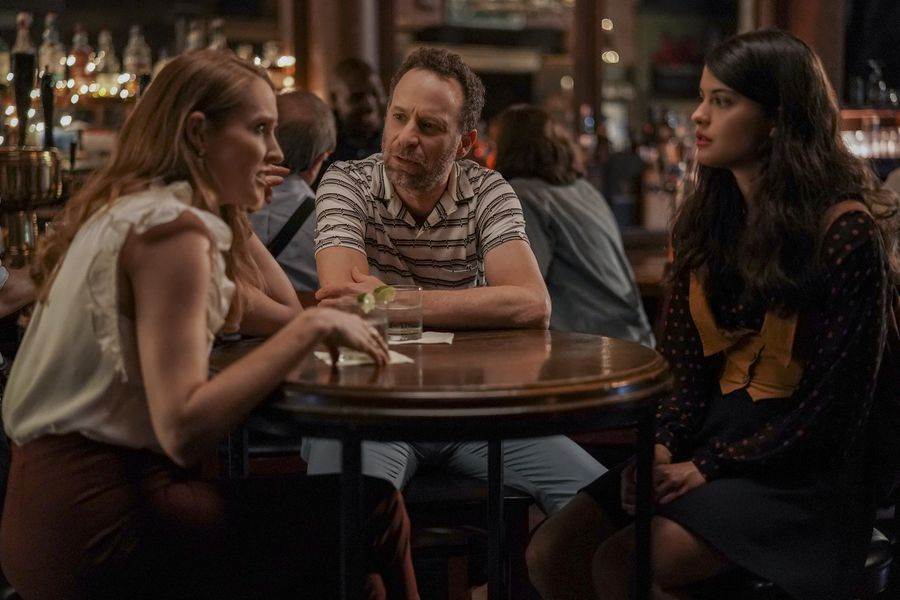 Concurrently, Stephanie complains that her boobs are swelling to Olivia. The injections are making her a bit unhinged at the moment and she’s insecure about body changing for the pregnancy. The final straw might have been when Josh hissed at her. She is super emotional and frustrated, which leads her to challenge Olivia: “Are we ever going to do this?”

Sensing her wife’s frustration, Olivia takes giant-Josh-cat off of Stephanie lying in bed. Olivia admits that it feels so wrong to be inviting a man into this giant moment in their life and she wishes they could have a baby without one. Suddenly wise Olivia is the one in need of some wisdom and her wife steps in. She explains that love is far more significant than lineage in a child’s life and that’s why they’re baby is going to be so lucky to be in a home with two moms that love them. Olivia doesn’t want Stephanie to experience this hardship alone and says she would like to carry the baby instead.

Before the episode wraps, we learn that James decided to sell his app, although he’s still processing this “odd comfort to feel.” He has to stay in New York to finalize some things, but Sam asks if he wants her to stick around. “I’m not sure I can keep saying no to you,” James gushes while Sam definitely blushes. As Sam returns back to Malden on the bus solo, she gets a text from Felicia, “So glad you’re heading home, Sammy.” And for the first time, Sam’s happy to be heading home, too. At least for now, she feels more at home in Malden and better off closing this New York chapter.