It’s May 1996, and Rand Gauthier (Seth Rogen) is in some serious trouble with a mobster named Butchie (Andrew Dice Clay). Miltie (Nick Offerman) has skipped town with all the money, which leaves Rand alone and owing money to a very angry mobster. 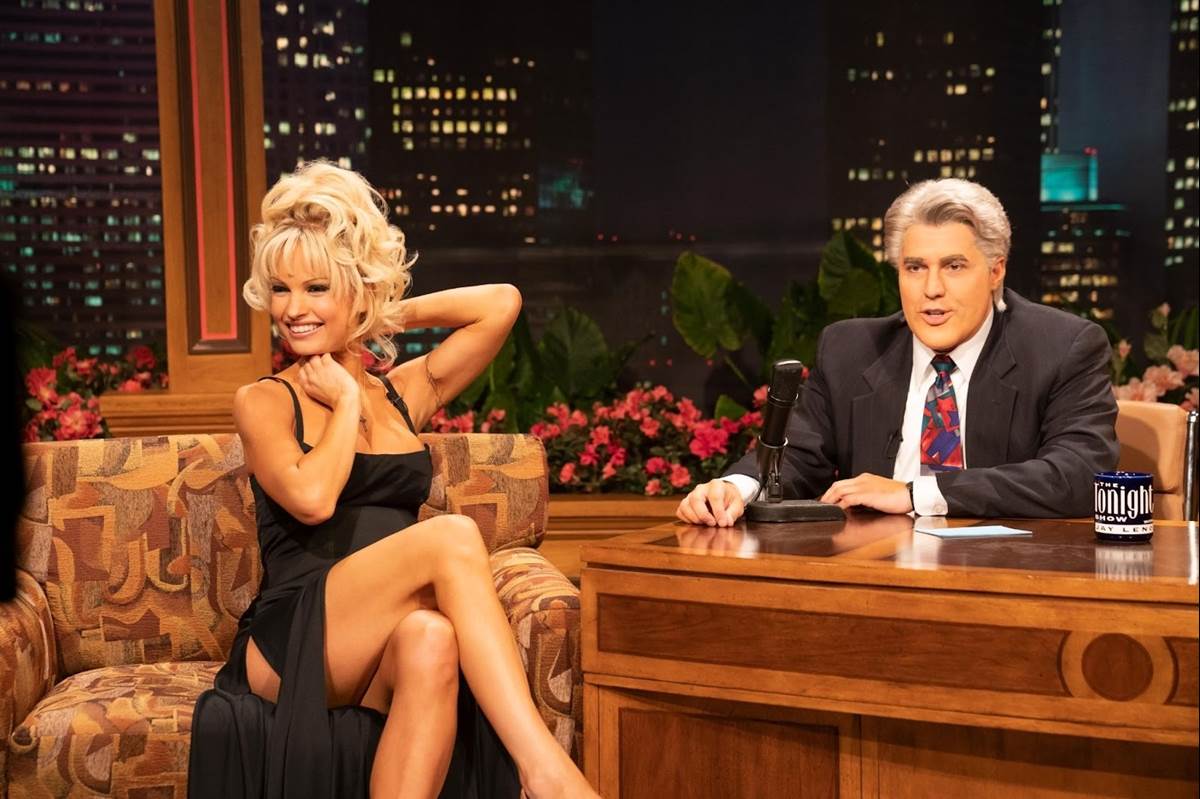 Fearful of Tommy Lee (Sebastian Stan) and now Butchie, Rand is hiding out at his ex-wife Erica’s (Taylor Schilling) apartment. With no place else to go, Rand has over-stayed his welcome. Frequently calling the Netherlands (remember this is 1996 and long-distance charges would have been killer) searching for Miltie, Erica has had enough and wants Rand out.

Thinking he can pay his debt to Butchie by selling the tape at Tower Records, Rand tries to press the case for the store to carry his video. Arguing with the cashier that the tape would be a best seller, he is rebuffed and leaves the famous store downtrodden. (Honestly, who really cares how Rand is feeling).

Pam (Lily James) is promoting her new film Barb Wire at a press conference, and she is asked about her lawsuit against Penthouse. While Pam only wants to talk about the film, she quickly answers the question and moves on with discussing Barb Wire. Pam is successful at steering the reporters off the topic of the tape and lawsuit, Rand is less than successful at avoiding Butchie’s thugs. The mobster wants his money, and Rand is going to have to pay his debt.

Rand, desperate to save his own skin, appeals for help from Tommy (The arrogance or stupidity of Rand is mind blowing). Sending him an anonymous letter for a late-night meeting, this is a hail mary pass for the helpless loser. At The Tonight Show, Pam is being interviewed by Jay Leno (Adam Ray), about Barb Wire but he quickly steers the conversation towards the sex tape. Backstage, Tommy is ready to storm the set, but he is restrained and watches while Pam deftly deals with the insensitive questions from Leno. Describing the horrible experience that she has endured, the conversation is steered back to Barb Wire.

Backstage, Pam reminds Tommy that this week is very important to her with the film being released. She makes Tommy promise that he won’t cause her any more drama than what already exists. Tommy agrees reluctantly. The two say their goodbyes as Pam continues the press tour, while Tommy has a meeting with Rand later that night.

It’s an empty parking lot at Dodger Stadium with a high fence that separates Rand and Tommy. Tommy isn’t having any part of the pity parade for Rand. While Tommy admits that he is a bad person, and that he probably deserved what happened to him, Pam didn’t. Pam is a good person who has been hurt by Rand’s awful behavior, and instead of giving him the money, Tommy sets fire to it laughing at Rand.

Since Rand can’t repay Butchie, he is forced to do debt collection jobs. Given a bat to intimidate or beat up those who owe Butchie money, Rand is out of his league, and unsure what to do. Butchie doesn’t care.

A possible victory turns into a massive defeat for Tommy and Pam. In their lawsuit against Penthouse, a judgement has come in, but not in their favor. The judge has tossed out the lawsuit and ruled in favor of Penthouse. To Pam, the obvious reason for this decision is because the judge didn’t see that Pam had any rights because she already posed naked for Playboy. This creates considerable tension between the couple.

At the premiere for Barb Wire, Pam and Tommy are celebrating the release of the film, but audience reaction is less than kind. Pam overhears a remark that Barb Wire is the second-best film that she starred in this year.

Rand is in trouble. He owes money to Butchie, Miltie has abandoned him, and he’s unsure if he should tell Erica that he’s the one who released the sex tape. Erica has nothing but good things to say about the tape, but when Rand finally spills the beans about what he did, Erica is furious. She kicks him out of the apartment because Erica is disgusted by the fact that Rand violated their privacy.

Pam and Tommy attend a public screening of Barb Wire. Tommy thinks this would be a great idea because he believes in the talent of his wife. Pam is less sure but is eager to see the public reaction. Sneaking into a theatre, Pam is mortified to hear the audience laughing at her performance.

In another part of town, Rand is at his wits end, and starts his gig as a debt collector for Butchie. 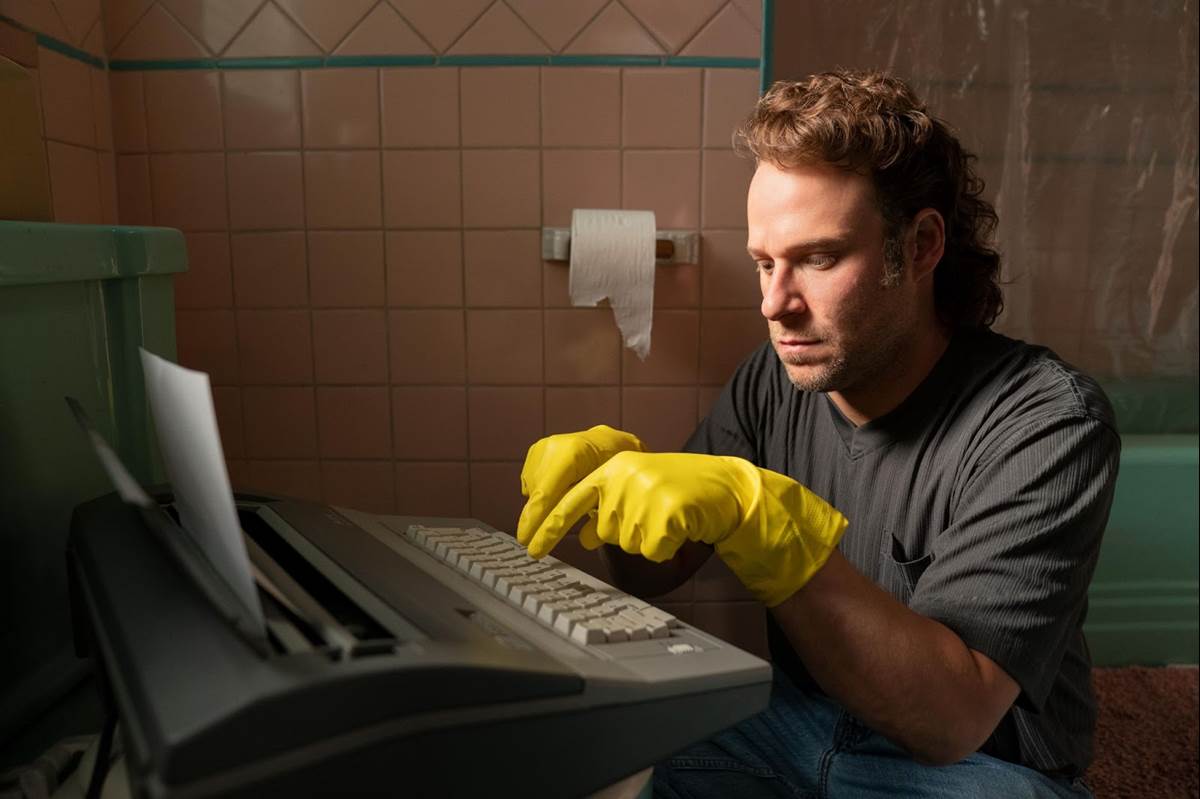 The hits just keep coming for Pam and Tommy. How the judge could have ruled in favor of Penthouse is beyond me, but I think Pam says it best. Since she has already posed naked for a magazine, that was all the excuse that the judge needed to side with Penthouse.

It continues to baffle me how these events continue to take place. Why is Rand Gauthier not arrested for theft? He has admitted to his crime, in fact he is quite proud of his actions. Why is he walking the streets? The story behind the leaking of the Pam and Tommy sex tape is a lesson in the destruction that the internet can cause.

Seth Rogen is outstanding as the lowlife Rand Gauthier. Not only has Rogen removed all the classic schtick that we associate him with his comedies, but he dives so deep into Gauthier and layers him with multiple levels of narcissism that as a viewer you might feel sorry for the man, but just as the empathy starts, Rogen injects a new level of depravity to Rand that helps make hating the character easier. It takes true talent to be likable at one moment, while playing a despicable scumbag the next.

I wish I could believe that there will be a happy ending. I know that’s impossible to expect.