It’s 1992, and in a small suburban neighborhood, a family is about to meet their new neighbor’s. What seems like a great friendship will end in pain and misery. This is the Hollywood Pictures thriller, Consenting Adults. 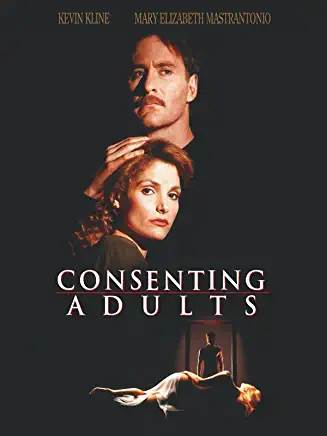 Richard Parker lives an average life in an average job that pays the bills and keeps the family running smoothly. His wife Priscilla is a loving and devoted wife, and while their marriage is long lasting (over fourteen years), the spark in their relationship has started to fizzle.

When Eddy and Kay Otis move next door, the bombastic and outgoing Eddy drags the Parker’s out of their stagnant lifestyle. Soon, the Parker and Otis family are inseparable. Dinners and vacations are numerous.

Eddy is even willing to create an insurance scam to help the Parker’s out of their financial debt. Things take a turn for the worse, when Eddy starts talking to Richard about the two men having affairs with each other’s wives. Repulsed at first by the idea, Richard eventually goes along with the idea, (he is very attracted to Kay).

The day after the affair, Kay is found dead, and Richard is accused of murder. Locked up, abandoned by Priscilla, who has now moved in with Eddy, Richard is in serious trouble. He has no way of proving his innocence.

When insurance investigator David Duttonville informs Richard that Eddy had a large insurance policy on Kay, the truth starts to come out. After Richard learns that Kay is alive, and that Eddy is running a larger insurance scam that has cost him everything, Richard must decide how far he is willing to go to get his life back and save the family he lost before it is too late.

Kevin Kline is an incredible actor that takes a role of the stupid lecherous husband and makes him likeable and sympathetic. Really, Richard has no one to blame but himself for falling victim to Eddy and his own personal desires, but Kline makes the audience forget about these horrible character traits. Kline brings his charm, wit, and charisma to Richard. I like how Richard’s investigation isn’t difficult, which makes it seem real and genuine.

Kevin Spacey is a great villain, and his character's resolution in the story is something audiences will especially cheer for today.

Director Alan J. Pakula takes a story that is the typical thriller of a cheating husband brought into a web of lies and murder and makes it remarkable. The shot’s used to frame the movie make this a cinematic experience, and not something that you would typically see produced for the multiple streaming platforms of today. The idyllic life that starts the film to the scene on bridge where Richard convinces Priscilla to play the tape of Kay for Eddie, this is a movie directed by a brilliant filmmaker. Pakula was a great, and it’s easy to see why with Consenting Adults.

No one better could play the role of Richard’s lawyer as perfect as what E.G. Marshall does.

It’s a typical story of one man who isn’t happy enough with his happy life, and because of his willingness to cheat, throws everything into tidal wave of terror. The storyline isn’t original or unique, it’s been duplicated multiple times.

Eddy Otis screams from the first moment he is on screen not to trust him. From riding his motorcycle off the moving truck, to his flashy blond hair, his willingness to be hit by a car for the insurance money, to always trying to dominate the conversation, Eddy tells the audience in many ways, I’M THE BAD GUY.

Consenting Adults was a surprise to me. I really didn’t expect to like it as much as a I did, but the performances are excellent, the storyline is kept to a minimum of absurdity, and the pace of the film is crisp and doesn’t want to spend hours explaining the finer details of a character’s motivations.

Perfectly directed with actors like Kevin Kline at his best, Consenting Adults gets a “Level 3 Streamy Award”. If you are getting ready for a big trip and need a compelling film to fill some of that travel time, this is the movie to see.

Next week, a look back at John Cusack’s High Fidelity.