Pixar Animation Studios continues to diversify the type of content it creates with its 25th animated feature, Turning Red. Premiering on Disney+ on Friday, March 11th, the film is a rarity in the Pixar canon for a number of reasons, chief among them being the female protagonist, from the mind of Academy Award-winning director Domee Shi (Bao). But the film also sets itself apart from the studio’s usual fare stylistically and in tone, proving that the Pete Docter era of the studio is as unpredictable as the studio’s formative years. 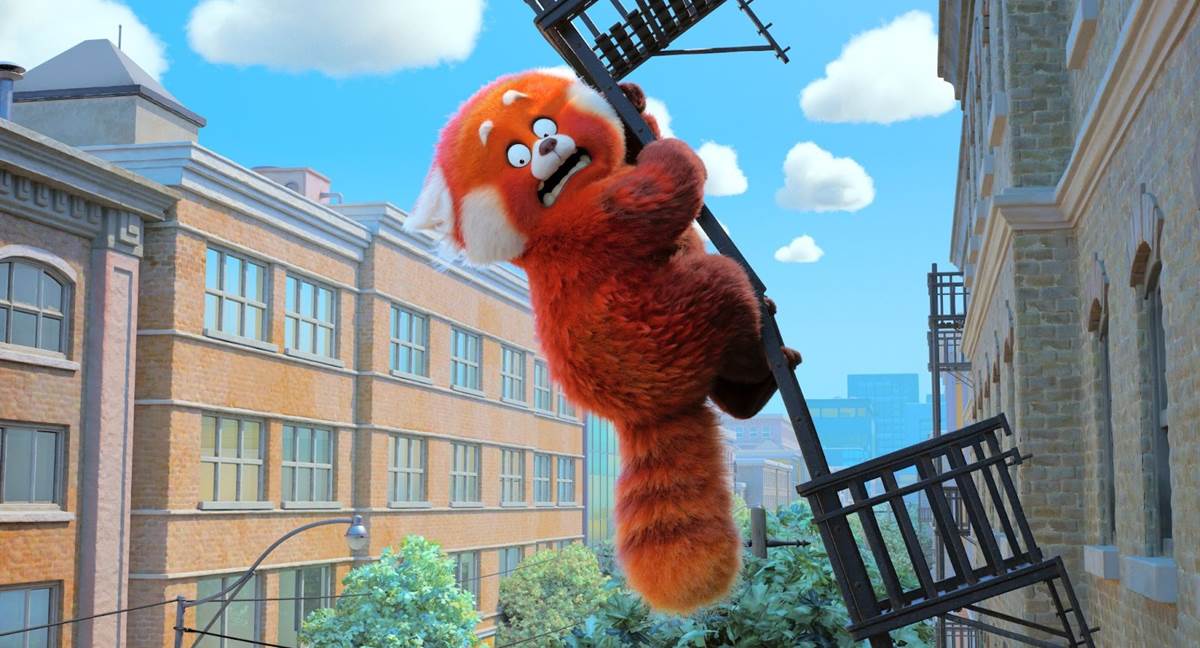 Meilin Lee is a 13-year-old girl in Toronto who, along with her best friends Miriam, Priya, and Abby, obsesses over the hottest boyband 4*Town. Unlike her friends, however, Mei presents a different version of herself at home, where she helps her refined mother run the Lee Family Temple and pretends to not be interested in boybands, or even boys for that matter. But when Mei’s mother Ming gets a peek into Meilin’s social life, unintentionally humiliating her daughter, Mei suddenly finds herself overly excited, and POOF!… she transforms into a giant red panda!

Turning Red is a lot of things all at once, constantly keeping the audience surprised and engaged by its plot twists. The first act feels allegorical for the onset of puberty, but that’s certainly not what the film is about. Like Brave, the main takeaway from the film is for parents and children to meet each other halfway in coming to a place of understanding. In this case, the message is delivered more effectively than Pixar’s lone entry into the Disney Princess franchise, with more of a generational, cyclical story at play here. With a film created and directed by the daughter of an immigrant, it also portrays the unique experience of growing up between two cultures, a theme Domee Shi also explored in Bao.

Set in 2002, the film is a microcosm of Y2K nostalgia for viewers who grew up in that era (Mei would be 33 in real life, probably a parent of a child of age to see Turning Red, so this should catch the attention of the majority of parents viewing the film). The boyband in the film, 4*Town, is a fun amalgamation of N*Sync, Backstreet Boys, 98 Degrees, and O-Town, with a bit of K-Pop thrown in to appeal to the younger generation. The songs they sing are catchy and feel of the era, even though they were written by contemporary hitmakers Billie Eilish and Finneas. 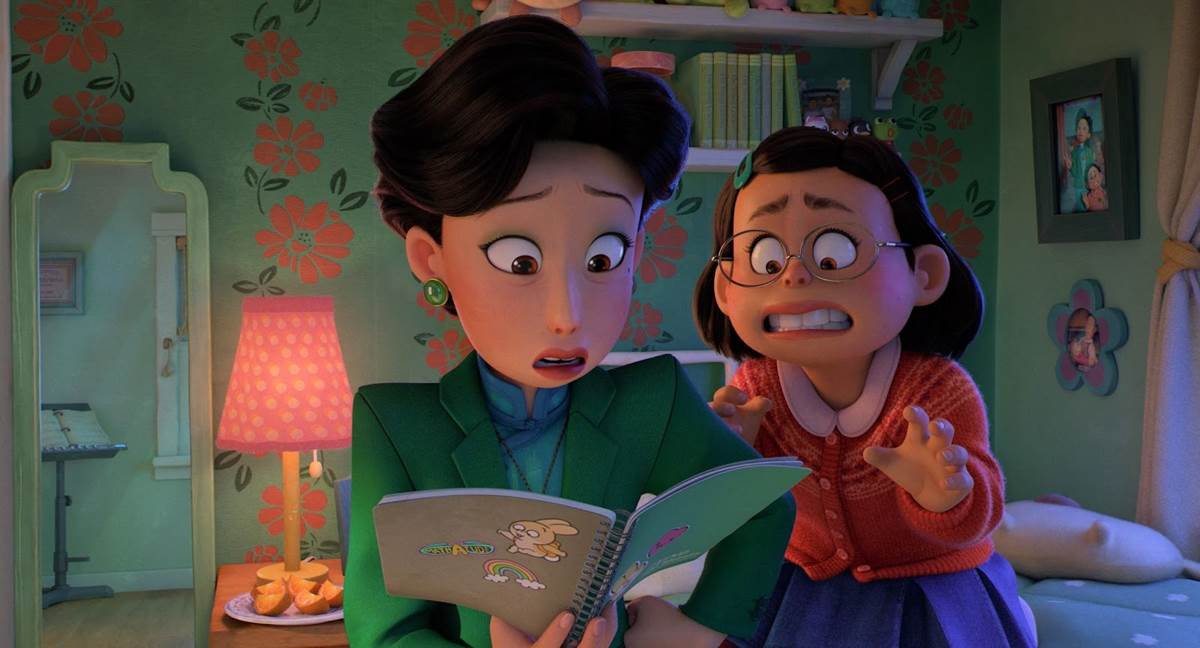 Stylistically, Turning Red looks like a cover of Teen Bop come to life, with soft angles and sugary color schemes. Pixar, always known for cutting-edge animation, produces what at surface-level looks a little more simplified for a studio capable of photorealism. However, the kawaii esthetics are not easy to achieve in computer animation to begin with, and then when you notice the textures and details peppered in, you begin to marvel at the technical wizardry at play. Like a 90s anime, characters' eyes will suddenly change shape based on their emotions, either requiring new rigging technology or swapping character rigs completely. If you then analyze the level of reflectivity of the giant watering eyes in those moments, it becomes clear that for as stylized as the world may be, Pixar is still at the top of the animation game.

Ultimately, Turning Red feels wholesome and fun. Adults will instantly be transported back to their adolescence and reflect back on how they balanced their social and family lives while experiencing a surge of hormones. For parents, the film becomes an excellent way to talk to their kids not only about being open and accepted for who they are in and outside of the home, but also about the tough transitions in life that will come their way someday. Yes, it’s a little bit about puberty, but it’s also a lot about family, friendship, and self-confidence. 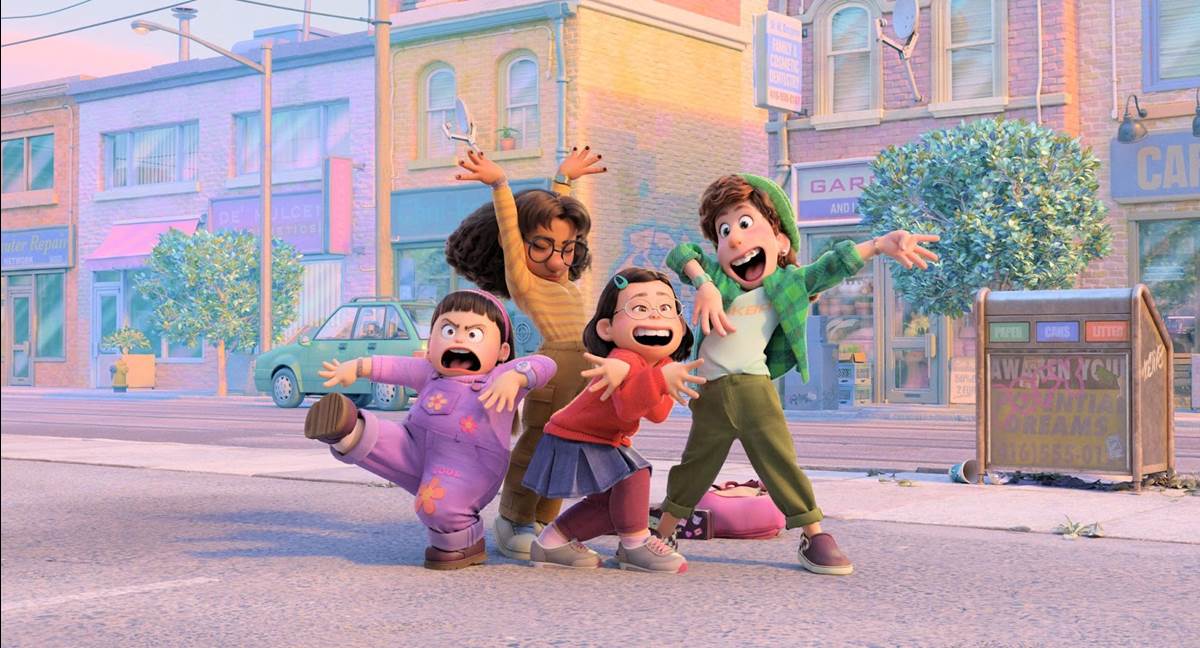 I give Turning Red 5 out of 5 drawings of a merman.