“I felt like I was surrounded by Alzheimer’s,” Samuel L. Jackson said during a TCA press conference for The Last Days of Ptolemy Grey, a six-part AppleTV+ limited series. Based on a book by Walter Mosley, Samuel L. Jackson spent nearly a decade trying to get the project adapted for the screen, revealing why it was so important to him. “My grandfather, my uncle, my aunt, my mom, there are people on my father’s side who have Alzheimer’s. And I watched them change, deteriorate, and become different people over the years. And being able to tell their story or listening to them and understanding that things in their past are more their present than what’s going on in their everyday life and understanding how to convey that to people. And giving an audience an opportunity to know that they aren’t the only people who watch their loved ones deteriorate that way, who need an outlet to look at someone else dealing with those particular things.” 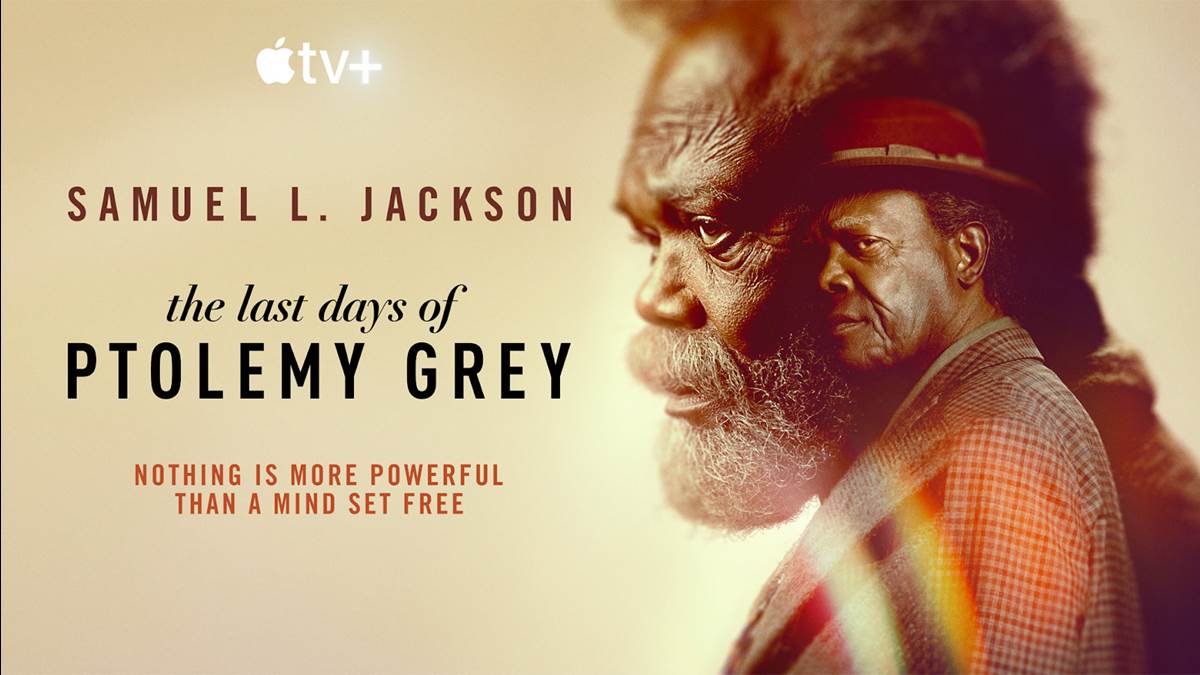 In addition to writing the novel, Walter Mosley adapted his book as a series and also served as an executive producer. “Books are so much different than screenplays and they have to unfold in a different way,” Walter Mosley said about the difficulty of the assignment. “I kept on looking about what was going to happen next. When you’re writing fiction, you don’t have to worry about that so much because people are reading it; they’re moving through it slowly at their own pace, whatever. But at this time, you have to, one, make sure that the revelations that you run across work out for the audience.”

Playing Ptolemy’s teenage caretaker Robyn is Dominique Fishback, who was Samuel L. Jackson’s first choice for the part. “Sam has a photographic memory, so he knows everybody’s lines,” she revealed about working with the iconic actor. “Sam is a very giving actor. I remember there was a particular scene where Robyn’s talking about her mom, and he was so leaned in and his eyes are locked in, and I knew that he wanted to help the story be told, and it was a mutual exchange for the characters and for what we were trying to do. And also, Sam knows how to be himself, right? And to me, that’s a huge lesson because a lot of times coming into this industry, especially young, you don’t really know how to be yourself. It’s very scary in how you take up space. Are you always on? Are you always this? And he shows up as he is and it’s inspiring because if you’re going to be acting for the rest of your life, you can’t put a character on all the time. You have to learn how to be, and so I’m definitely learning how to just be from Sam.”

“I don’t know of any show like this one,” Walter said of what makes The Last Days of Ptolemy Grey groundbreaking. “The idea of just concentrating on having a whole experience around a person who’s experiencing dementia in a television environment, episodic. What he goes through, how he responds, what he does. And then on top of that, Black characters going through this experience that, usually if you start dealing with characters outside of what people consider the mainstream of America, they have particular roles that they’re playing. But we had a completely different experience.”

With Samuel L. Jackson having campaigned so passionately to executive produce and star in the series, he was asked where Ptolemy Grey ranks in his list of signature characters. “All the characters that I portray mean something to me and in the moment of doing them, they’re the most important character of the moment,” he shared about not playing favorites. “And even characters that I repeat. I’m here in London doing Nick Fury now. I repeat him a lot so I know who he is and he’s easy to access. Ptolemy was easy to access because I read the book a lot. I mean I read the book a lot of different times in different time periods when we were trying to deal with other people to get it made, and they wanted to make it as an hour-long or hour-and-a-half-long movie, which was impossible. And I was always banging my head against the wall about that because I never wanted to tell the story that way. So, Ptolemy fits into the real-life chronology of my life in terms of honoring all those people in my life who had Alzheimer’s, or all the people that I met at the places that my mom was where there were other people. Or every time I walk into a room, and I can’t remember why I walked in there, or I can’t remember the name of an actor in this movie. All those things mean something to me. So, it’s an honest and hopefully endearing assessment of the deterioration of life that a lot of us face, feel, in a personal way with someone who’s in our family or maybe people who feel themselves slipping and need to see and find a way to pull themselves back.”

The first episode of The Last Days of Ptolemy Grey is now streaming exclusively on Apple TV+.