It’s the final episode in the first season of How I Met Your Father, and while some mysteries will be solved, and relationships will change, one thing is certain, we are nowhere near knowing the identity of the father. 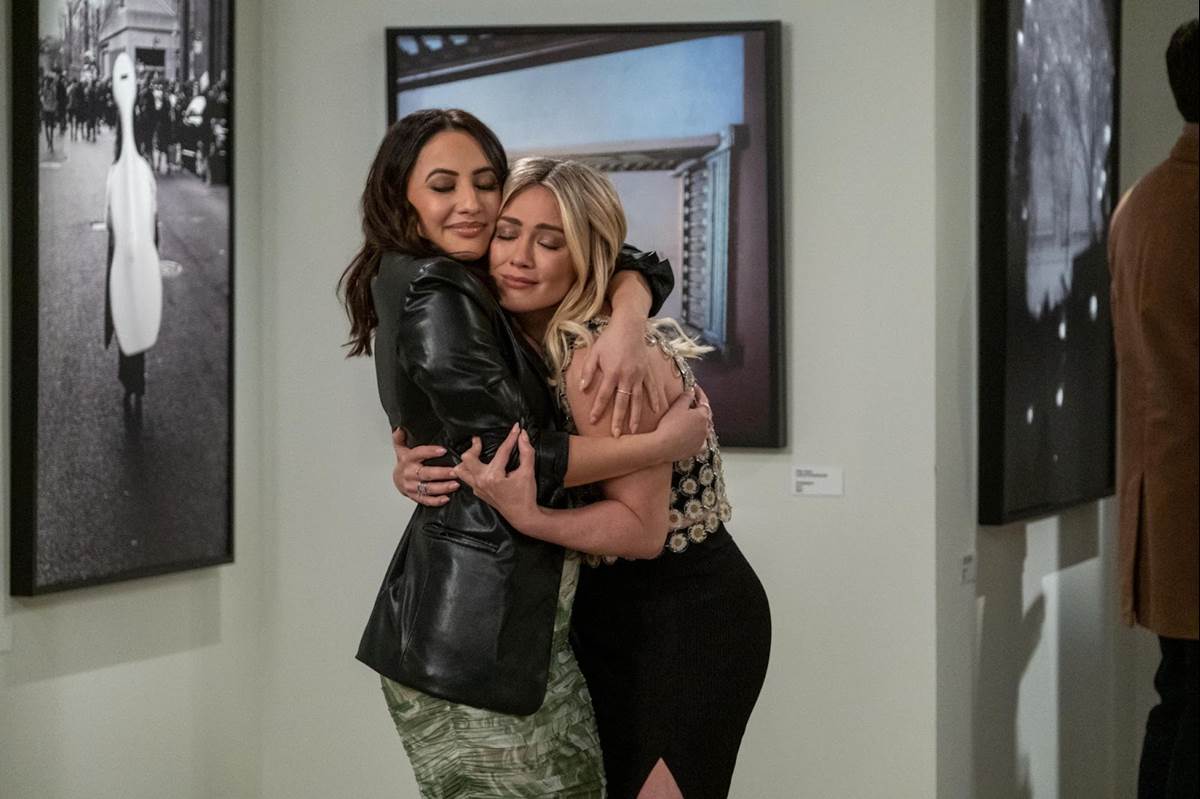 As Sophie (Kim Cattrall) in 2050 tells her son, The Captain’s (Kyle MacLachlan) affair on his wife Becky (Laura Bell Bundy) will have a lasting impact. Even though he is willing to offer millions of dollars and a bottle of a single malt Glen McKenna scotch, (nice call back to HIMYM) Becky won’t have it.

It’s 2022, and Sophie is waiting for Jesse (Christopher Lowell) to show up for their dinner date. When he does, Jesses describes going to see his ex-girlfriend Meredith (Leighton Meester) and how she wanted to get back together. Telling Sophie that he got his closure, the date ends happily with the two waking up in bed the next day.

Hannah (Ashley Reyes) and Sid (Suraj Sharma) are discussing their future, and how the fellowship she is inline to receive in Los Angeles is worth taking. While the engaged couple are working through the issues of long-distance relationship woes, Charlie (Tom Ainsley) is in a panic. When Ellen (Tien Tran) returns home, Charlie bares his soul about a problem that has come up with Valentina (Francia Raisa). Valentina wants kids and Charlie does not. Never in his life did he think he would want kids.

Sophie is feeling great as she gets up for a shower but hears Jesse murmur ‘I Love You’ and that throws her into a panic. Despite a promising start to their relationship, Sophie showers while Jesse leaves. One potential happy couple is starting to come apart, while Sid and Hannah are frantic over the extreme cost of their wedding. Plus, the additional cost of a wedding in India is sending the two into a panic.

Ellen may have found a comfort animal in a runaway cat, but her allergy and an inability to connect with the animal is depressing her. Ellen had a job interview at Goliath Market, which didn’t go well, and now as she sorts through the wreck of her life, her roommate Charlie’s happiness is coming undone.

Charlie tells Valentina that he doesn’t ever want kids. This is upsetting to Valentina who thinks that’s impossible, and that he might change his mind. Mirroring this discussion, Sid and Hannah are wondering what the point is of getting married if they are going to be on different sides of the country.

Sophie needs some clarification on what Jesse meant. When she asks him about it, he laughs it off and says that his sleep talking often gets him in trouble. Seeing the relief on Sophie’s face, Jesse wonders what is wrong with saying I love you. They have known each other for awhile, and he cares deeply for her. When Jesse tells Sophie that he gave up going on tour with Meredith for her, she tells him that was a mistake, and he should have gone.

Heartbroken, Jesse asks her to leave, and Sophie ends up at a bar that is well known to the tenants in the building. Stopping at MacLaren’s Pub, she meets the bartender Carl (Joe Nieves) and Robin Sherbatsky (Cobie Smulders) who listens to Sophie’s troubles.

Robin opines about the great days she spent in the bar, and how her group of friends use to spend many nights in the bar talking about their lives. Robin asks Sophie to tell her stupid love story so that it can bring her back to the good old days when she was young.

As Charlie and Valentina continue their argument about the future of the relationship, Ellen leaves the apartment and runs into her neighbor Rachel (Aly James). After a misunderstanding, Ellen realizes that she has Rachel’s cat and returns her. This helps to gain another opportunity for Ellen with Rachel.

Back at MacLaren’s, Robin and Sophie sit in a familiar booth, where Sophie tells Robin about the I love you moment from Jesse. From the wise words of Robin Sherbatsky, she tells Sophie to not be scared. The only decisions she regrets are the decisions she made when she was scared. Filled with confidence, Sophie goes back to Jesse only to see Meredith in his apartment.

At the exhibition, Sophie is filled with sadness on one of the most important nights of her career. She learns that Valentina and Charlie have broken up, Ellen did get the job at Goliath Market, and Hannah and Sid eloped. Not wanting to talk about her own breakup, Sophie is thinking of her exhibition work featuring Jesse when the most unexpected person arrives at the gallery. Thanks to the divorce proceedings between The Captain and Becky, the boats that The Captain had were given to Becky in the divorce, which resulted in Ian’s (Daniel Augustin) job in Australia being cancelled and returning to Sophie’s life. 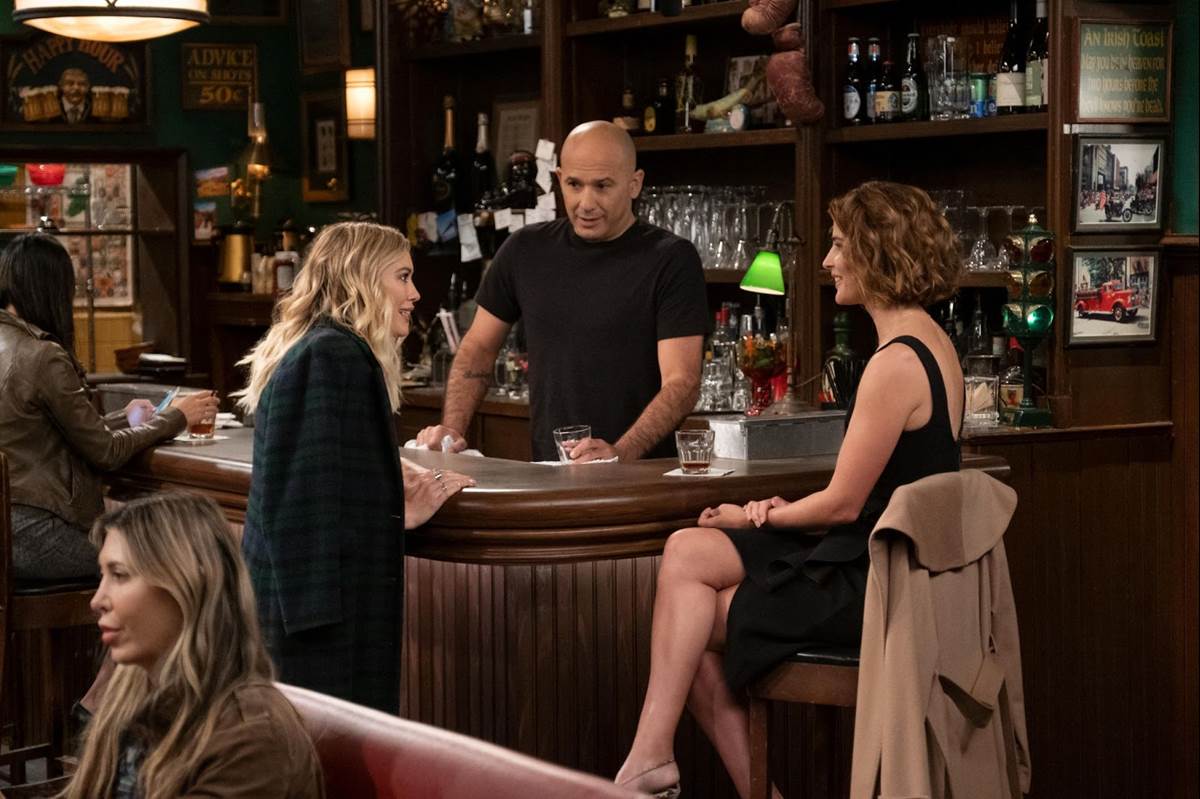 I did not expect Charlie and Valentina to break up. That was a bit of a shock, especially over the kid issue, since we have never heard of this hang up of Charlie’s until now. This makes me think there are bigger things planned for Valentina and Charlie, and it doesn’t involve them together.

Sophie was bound to get scared by Jesse. I am not surprised by this. We have learned a lot about her childhood and her parents in the past nine episodes. I think this also shows how much she really cares for Jesse, because she didn’t break up with Drew and he was serious about her.

Sid and Hannah getting married is surprising. I expected them to end their relationship. I don’t see the marriage lasting.

Having the Captain and Becky come back to play a significant part in Sophie’s life is a nice way to show the impact the characters from How I Met Your Mother have on the new cast. We finally learn how Ted ended up with the pineapple, so a loose end from HIMYM has been solved.

Seeing Sophie walk into MacLaren’s was nice. Watching her get a drink from Carl was wonderful but seeing her talk to Robin Sherbatsky was excellent. The fact that they brought back Cobie Smulders is a surprise and the perfect way to tie the characters from both series together.

Fans of HIMYM know all about Robin’s relationship struggles, and if there is anyone who could be Sophie’s guardian angel, it’s Robin. Plus, we get to see a beloved character continue to grow in her arc, albeit for a short time. This is a Robin Sherbatsky who is a little wiser, and with regret. She knows her fear caused her to miss out on a relationship with Ted. Her help with Sophie is a way to make amends with herself.

I still don’t think Ian is the father. Yes, I noticed how much Sophie’s face lit up when she saw him, but he’s not the father.

How I Met Your Father has outdone itself with its first season. While I laughed at the jokes and liked the characters, the best part of watching this series was knowing that I could escape from the problems of the real world and take a mini vacation for the duration of an episode. Hilary Duff is perfect in the role of Sophie, and I can’t wait to see the supersized season 2.