There was a time when Jake Gyllenhaal was an unknown actor just starting out. Coming off his critical success of October Sky in 1999, Gyllenhaal opted to try out his comedic chops with Touchstone Pictures 2001’s Bubble Boy. Is it a good movie? I am about to find out. 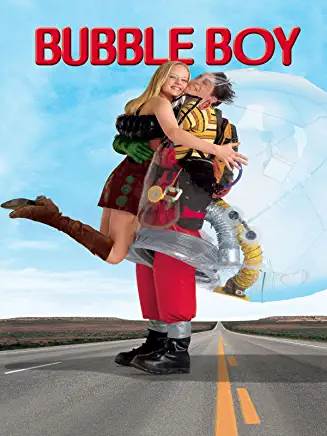 Jimmy Livingston was born with no immunities to germs. His overprotective mother has taken it upon herself to build a self-contained world at home that will keep all germs out, and her son safe but permanently inside. As the years pass, Jimmy grows up, and despite the odds being stacked against him, makes friends with the next-door neighbor Chloe.

Their relationship grows but is constrained by Jimmy living in a bubble. After high school, despite Chloe’s interest, Jimmy is unable to tell her how much he cares for her. When he learns that Chloe is about to be married, it motivates Jimmy to burst out of his bubble and stop the impending wedding.

He builds a travel bubble to help him survive the journey to Niagara Falls to stop the wedding. As Jimmy crosses the country, he lives a lifetime of experiences that he has missed out on. Despite being mistaken for a god by a cult, chased by his mother, making friends with a rough and tumble biker, Jimmy learns to take chances and to burst free from his worry.

Jake Gyllenhaal is hilarious. For such an early performance in his career, Gyllenhaal brings an innocence to the role of Jimmy that is difficult to pull off. I laughed more times than I thought I would because of Gyllenhaal. Jimmy could be played for the fool, and that is not what happens in the film. While Jimmy has spent much of his life in a bubble, Gyllenhaal’s performance allows the audience to believe that Jimmy can handle himself in the world.

Danny Trejo is brilliant. I love watching him be funny and tough. This is a movie that allows him to have fun because he’s not killing anyone or dying himself. I love how connected he is with Jimmy and tries to be his friend. Danny Trejo needs more comedy roles.

The multiple supporting characters that are made up by people who were pop culture famous in the early 2000’s is remarkable. I found that with each new scene, I was recognizing a new face that I had seen before and did not expect to see in the movie.

While I found the movie funny, there is a certain level of silliness to the story that could cause a viewer to lose interest. There are laughs, but a lot of stupidity too. Had this film been made today, I suspect there are many jokes that would be reworked away from the offensive overtones. Bubble Boy is not destined for any Top 10 lists.

Bubble Boy is not a great film but it’s not the worst. The best advice I can give is to have no expectations for greatness. At least that’s what I felt when I hit play on the movie. Start the show with no thought whatsoever and you will most likely enjoy the movie.

It’s not high brow comedy, nor is it down in the dirt low brow. There is a happy medium, and because I laughed more than I thought, Bubble Boy gets a Level 2 Streamy Award. Find your tablet, press the play icon, and let it run in the background while you do other things. You don’t need to follow the script word for word. In fact, I recommend you don’t. Have something else to do while watching the movie. That way you will laugh at the funny parts and miss everything else.

Next week, it’s a journey back to 1997 with Tim Robbins and Martin Lawrence in Nothing to Lose.