Marvel will soon be bringing us a new kind of hero when Moon Knight premieres on Disney+ later this month. Today, some of the stars and creators of the upcoming series got together to discuss the show’s authenticity, the newest superhero suit and much more in a virtual press conference.

Naturally, Curtis was asked about how long Moon Knight was planned for the Marvel Cinematic Universe an how he would fit into the bigger picture.

“Moon Knight in particular has been on Kevin Feige’s radar from the very beginning,” Curtis said. “I think this was a natural progression for the Marvel Cinematic Universe and I think this was the perfect time.”

Series star Oscar Isaac was asked about what attracted him to this role and what makes this character so unique.

“It just seemed like there was a real opportunity to do something completely different, particularly in the MCU,” Isaac said. “To talk about this real internal struggle that this person is having.”

He expanded on that and talked a bit about how this character’s story is unlike anything we’ve seen in the MCU before.

“I think the story is so point-of-view, you’re in the skin of this guy and you're seeing things happen. You're experiencing it just as he is experiencing it,” Isaac said. “I think theres something that is terrifying about that.”

And speaking of that terrifying experience for Steven Grant, Isaac explained what the experience was like acting out these multiple roles.

The first step was to hire my brother, Michael Hernandez, to come in and be the other me. It’s the closes thing to me there is,” Isaac laughed. “That was something I didn't anticipate, how technically demanding that was going to be. The most fun thing about acting is acting opposite somebody and letting something spontaneous happen that you didn't expect. But there wasn't the opportunity to do that.”

Isaac also went on to explain that he wanted to bring a different kind of humor to the MCU by delivering it from a character who didn’t know he was being funny. He talked about going to British comedies like The Office and using that to create his Steven Grant character, and he even mentioned that giving the character a British accent was actually his idea.

Calamawy got to share her thoughts on here character, who is not just a love interest but also a hero in her own right.

“I love how strong she is but at the same time I feel like I got to play the full gamut of a woman with her because she’s strong and she fights for what she wants but shes also kind of vulnerable and scared,” Calamawy said. 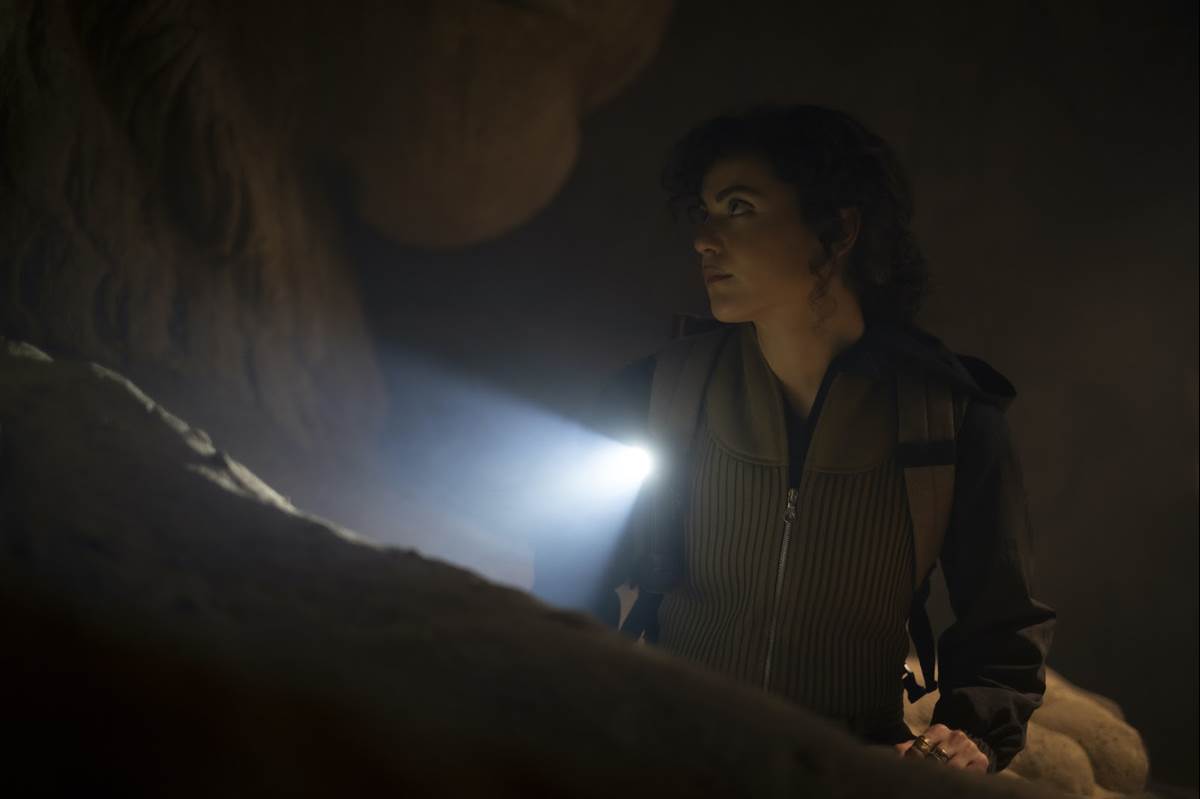 Calamawy went on to talk about what it was like not pulling from an existing character and more or less basing the character on herself and her upbringing in the Middle East.

“I didn’t have this idea to pull from of this woman, like without giving any spoilers, it was just really important to me that, as someone who’s grown up in the Middle East, that I take, the more I ended up taking from myself the easier it became, Calamawy said. “I wanted to find a story that would work with someone who had a similar conditioning, who would deal with situations a certain way. What would that look like for someone raised there versus someone raised in the west. And it was confronting in many ways but when I felt ok to take that space i feel like it was happening in a more fluid way.”

As for the third actor on the panel, Ethan Hawke talked about what drew him in to taking on the role of Arthur Harrow even without ever actually reading the script prior to signing on.

“The histories of movies are paved with storytellers using mental illness as a building block for the villains,” Hawke said. “And we have a mentally ill hero. And thats fascinating because we’ve inverted the whole dynamic.”

When the group was asked about the role of Egyptian mythology in the show and how they prepared on that front, Hawke didn’t hesitate to praise Diab.

Diab talked a bit about what he hopes audiences will take away from this series and how they can connect to these characters.

“What I learned through the journey of doing the show is that the characters need to live with themselves, the identities,” Diab said. “And I felt that I identified with that.”

Diab also explained that Moon Knight spans a wide variety of genres and considers it an accomplishment that the teams managed to make that work.

“One of the things that im really proud of, and we are collectively, is blending those genres together and having it not feel alien,” Diab said. “You have horror, you have action, you have comedy and you have drama.”

Diab also mentioned, as the group joked about rehearsing together, that the production team on Moon Knight holds the record for “least photography” in the history of Marvel. Clearly this was a very smooth production. Moorhead expressed his happiness just to be a part of the MCU and get to tell this story based in mythology. He also had an interesting take on the mythology being created today.

“The great American myth right now comes from Marvel, and a lot of other places,” Moorhead said. “But it is really cool right now to be a part of this.”

His creative partner, Benson shared a philosophy the due follows that explains why they fit so well into the Marvel universe.

“I think in everything we do, our cheat to finding the humanity in characters is to have them crack a joke and see the humor in a situation,” Benson said.

And finally, the group was asked about the unique look of this Moon Knight suit we see in this upcoming series. Curtis talked a bit about how this final concept came to be.

“This character’s been around since 1975. The artists and craftsmen and women that have been associated with this project on the page are incredible,” Curtis said. “But then you bring in these guys and these gals and what this team of artisans and craftsmen and women do and what we were able to translate to the suit, and really take inspiration from a lot of the great pages of 50 plus years, it was really best idea wins and I think the best idea is what you see on the [screen] both in the Mr. Knight and the Moon Knight costumes.”

Marvel’s Moon Knight will premiere on Disney+ on March 30th.