Sam’s at the bar. It’s not the greatest start for a season finale of a show about a recovering alcoholic. However, there’s something a bit off about this version of Good Time Sally’s. There’s no bartender and only one other soul at the bar. Emphasis on the soul because Sam is at the bar with her late father. It’s a dream. 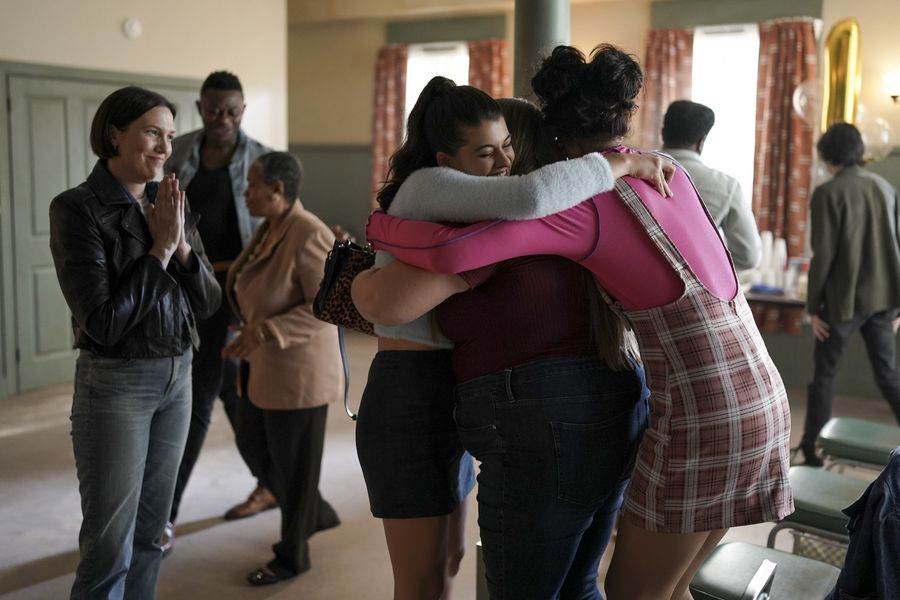 Sam’s father asks what they’re celebrating. “I just survived a years probation, my ex-friend invited me to stupid wedding, my 1 year chip,” Sam summarizes her year. While her father looks over her yearbook, she expresses her guilt over being drunk during the years leading up to his passing. Suddenly, she flips out that she’s drinking. “Classic alcoholic anxiety dream,” her father chuckles, but he’s fading away. Before she can panic, he assures his daughter it’s okay, “Don’t let your mom date anyone unless it's Pierce Brosnan.” Hate to break it to dream father, but Carol is dating Bob. When her dad is gone from Good Time Sally’s, she wakes up in a sweat. The calendar reveals Sam is 367 days sober.

At probation with Gayle, Sam is asked to sign some forms. Just a mere beat later, Gayle is sending her off, “Great. Got it, thank you! Have a good life!” Sam is thrown off by the brevity of their meeting, “What’s next?” Gayle explains nothing is next between them and unfortunately there is no extra credit for sobriety. Sam, expecting more check-ins, admits the weird feeling that she’s going to miss Gayle. (Same, Sam!) Gayle emphasizes her lack of concern, but ends with sharing that she’s going to join Carol’s book club “as a trial period.”

Carol is doing Sam’s makeup for Brit and Joel's wedding. She’s being nice, looking refreshed from their mutual amends from last week’s episode, and seemingly can’t wait to meet James. However, he is late. Bob and Carol exchange some complicated words, but thankfully, Sam is there to translate. She fits nicely in this home. And would you look at that, the new boyfriend James still hasn’t shown up. Carol jumps to analyze his unreliable nature and Sam dismisses it immediately because he’s never like this. Perhaps, a mother’s instinct is kicking in.

At the wedding, Sam and Felicia are looking gorgeous and glowing. Brit invited Felicia while tripping, so Felicia hopes the offer still stands. The pair wait for James and Sam is starting to get concerned because James is “not the type to ghost.” At that moment, James strolls up and explains that he had an accident. Is this the truth? Acting as audience advocate, Good-Friend-Felicia judges, “Too shook up to text?” Sam takes a gentler approach and says, “For the record, we were all scared and worried.” Entering the reception and having a good time would be too easy of a plotline for this show, because before they can even enter the venue one of the bridesmaids comes out. “Backstage is running behind,” she says, unable to feign calm. Sam decides that she should go check on Brit.

Jumping to the backstage that is running behind, Brit is sitting on the floor and she’s not wedding-ready in more ways than one. Joel enters, seeing the bride on her wedding day. In the language of television that is not a good sign. Joel is shooed out and the sales manager from earlier in the season enters on behalf of this bridal emergency. Brit says the dress doesn’t fit, yet it zips all the way up. The sales manager analyzes Brit’s hesitancy, “The dress is the calling from the universe,” and makes a break for it after a brief pep talk. This is not in her job description. 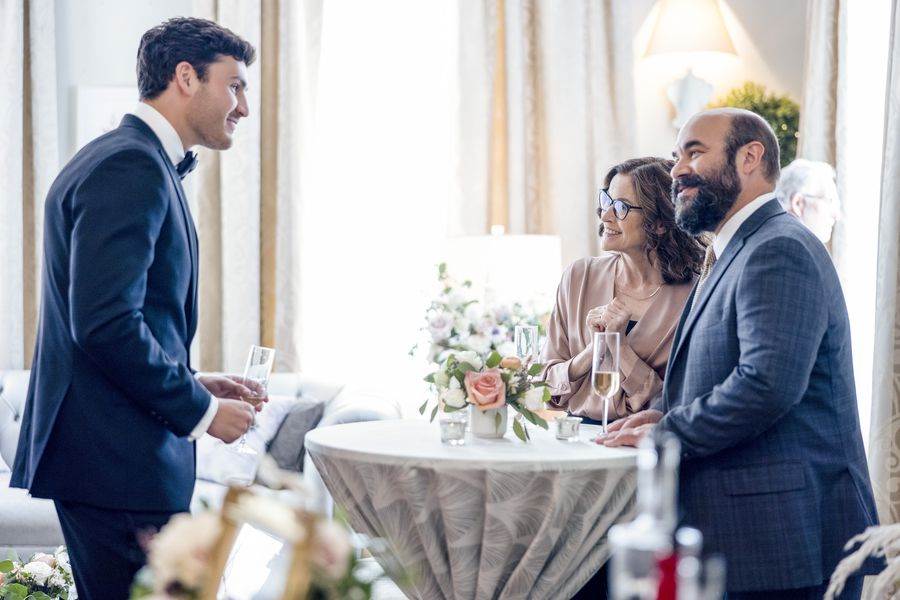 Joel mingles around and gets introduced to Bob, who asks the question we’re all wondering: “What will happen?” Joel’s very nervous and chugging champagne. No one is keeping it together at this wedding, but at least Felicia starts to get some attention from a handsome gentleman. Peter, a doctor, introduces himself to Felicia, “Brit said that I should find you.” Felicia explains she’s really not in the space for “just a hookup,” but Peter expresses that he’s intrigued in pursuing more. The sparks are flying and the pair grab a drink together.

On her way out the sales manager finds Sam, “the horrible girl from the bridal shop” and drags her into Brit’s bridal breakdown. Brit asks Sam, “Is Joel who you thought I’d end up with?” It’s very clear, despite their distance, Brit respects and needs Sam’s support more than anything else right now. “No, for a variety of reasons,” Sam points out the obvious. “Do you think I should go through with it? I’m lost.” Brit confides to Sam who very quickly recognizes this is a runaway bride situation. Unprovoked, Brit says Sam “doesn’t help her” and “it’s always about her.” Sam tries to get Brit to settle, but she’s acting out. Brit is tired of being the “good person” and confesses that she hooked up with Joel at Sam’s Dad’s shiva. “It’s your turn now,” Brit gives up and Sam storms out at the heartbreaking reveal.

Grabbing James, Sam says she can’t be at the wedding anymore. James, though hesitant, agrees he’ll leave with her. They start kissing, but Sam pulls away, “Have you been drinking?”

James tries to brush it off as “one drink” because he got nervous, but Sam isn’t falling for it. Just one drink doesn’t apply to them. She storms off to her car, “I followed the rules. Now it can’t happen.” With one year under her belt, Sam waited for them to be an item and now that they’re finally together, James has created a huge role-reversal of responsibility. “Now, it doesn’t make me a bad person,” James minimizes the situation, “It’s just a slip.” Sam cannot believe what she is hearing, “Do you want me to slip too?” She tries to get him to go to a meeting, but James declines. “I love you,” James says for the first time. Sam slams the car door, “You're drunk.” Staying strong, Sober Sam sets her boundaries and leaves James behind as she drives away.

At her mother’s house, Sam goes home to play some video games. Although not the most glamorous occasion, this is a giant moment for our protagonist. In a difficult act of self-preservation, Sam met overwhelming conflict and didn’t resort to old, life-altering habits. As the pride radiates off the screen, there’s a knock at the door. 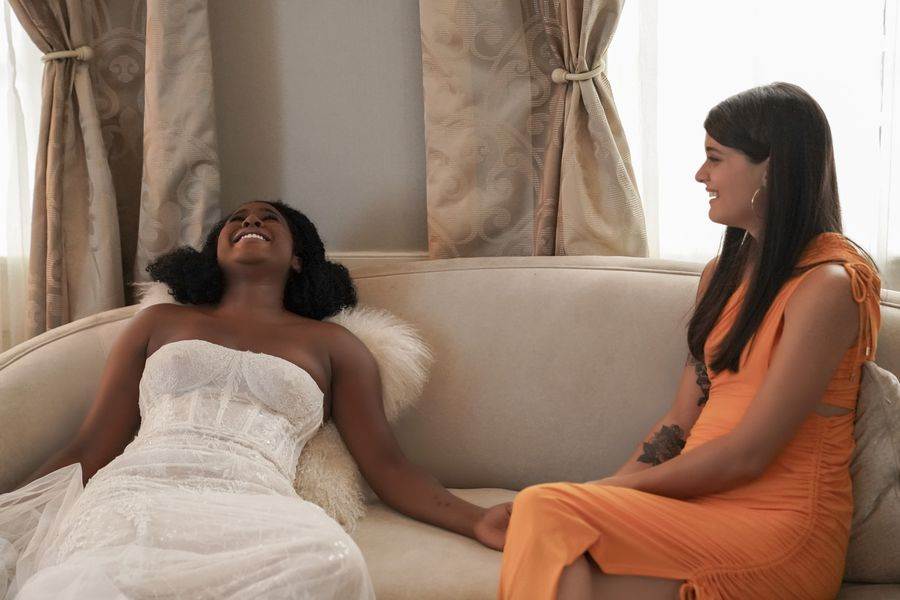 It’s Brit, in her wedding dress, “Hey I need you.” Forgetting everything else that has happened in the day, Sober Sam is able to assess the situation, puts herself aside, and starts to give her best “it’s-okay-to-be-a-runaway-bride” speech. But, Brit isn’t a runaway bride, “It’s worse,” she cries. Brit went through with the wedding and she’s here to mourn. The series closes with a new chapter for these former ex-friends. They’ve been through a lot in the past year and a lot more to face in the future. But for now, they escape their problems and just sit in this moment being together again over a solid batch of video games.

That’s a wrap for season one of Single Drunk Female! Season 2 has yet to be announced, but until then all episodes are available for streaming on Hulu.