A mild-mannered banker is about to have a bad week when he notices an excessive deposit in a client account. Get ready for a wild and crazy ride with Eddie Griffin and Orlando Jones in Double Take. 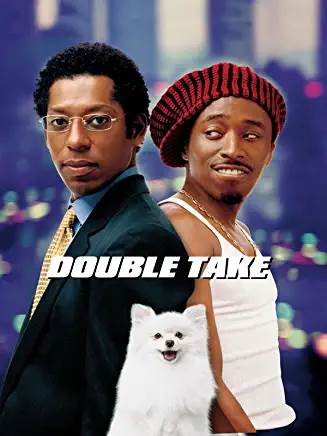 Daryl Chase is your average banker in a prestigious firm in New York City. When he notices a surprisingly large deposit in a client account and starts questioning what is going on, the world turns upside down. Shot at, and fearing for his life, Daryl has only two options for help, a CIA agent named Timothy McCready, and a street hustler named Freddy Tiffany who won’t leave him alone.

As Daryl falls further into the mystery, he comes to learn that the people he thinks he can trust, like McCready and his boss Charles Allsworth, may not be his friends. The most promising and helpful person appears to be Freddy Tiffany.

Double Take is a surprising film because from the trailer, you don’t expect to get hooked into the story. Initially, Eddie Griffin’s Freddy is annoying. As the story progresses and the action switches from New York City to a train ride (love the homage whether intentional or not to North by Northwest) to Mexico, Griffin peels back the layers of Tiffany to the point that the audience isn’t sure whether to hate the guy or like him. As the film progresses and we reach the climax of the story, Eddie Griffin has done such a masterful job that the final version of Fred Tiffany is unrecognizable from the initial introduction at the beginning of the movie. The viewer will come to love Fred and forget about Freddy.

Orlando Jones is the modern-day version of Cary Grant. He’s sophisticated, charming, funny, and when he goes on this wild adventure, the audience will look at the surrounding events through his eyes and feel the bewilderment that Jones’ Daryl Chase feels. He has such a strong presence on screen that every scene he’s in, Jones makes better just by being there. His casual retort to a line, or the body language he displays allows the man to own the screen. We need more Orlando Jones.

If you are not a fan of twisting drama’s which force the viewer to question what is going on, then Double Take isn’t the film for you. The story is evolving throughout the film and the lines of good guys vs bad guys is redrawn every five minutes of the movie.

Double Take is surprisingly funny, with enough twists and turns to keep the audience guessing about the intentions of everyone. Are there some clunky moments in the dialogue? Sure! But very few movies are perfect, and Double Take isn’t meant to be Citizen Kane.

Without little knowledge of the film, (except for how brilliant Orlando Jones is), I was genuinely surprised by how much I enjoyed Double Take. For throwing me a curve ball, I rate Double Take with a 3 Reels award on The Streamy Scale. Perfect travel entertainment is waiting for you when you download Double Take for your next trip. It’s funny, and at less than ninety minutes, worth the investment.

Next week a look back to 1995 and the romantic comedy Miami Rhapsody.