Earth Day is a time to reflect on the impact we all have on the planet and what we can do to help ensure a healthy environment for generations to come. This year, Disney+ is celebrating with the release of three projects: the new Disneynature documentary film Polar Bear and the National Geographic specials Explorer: The Last Tepui and The Biggest Little Farm: The Return. In advance of the April 22nd release of each project, the stars and creators gathered together for a TCA press conference to share behind-the-scenes stories and the messages they hope audiences will take away. 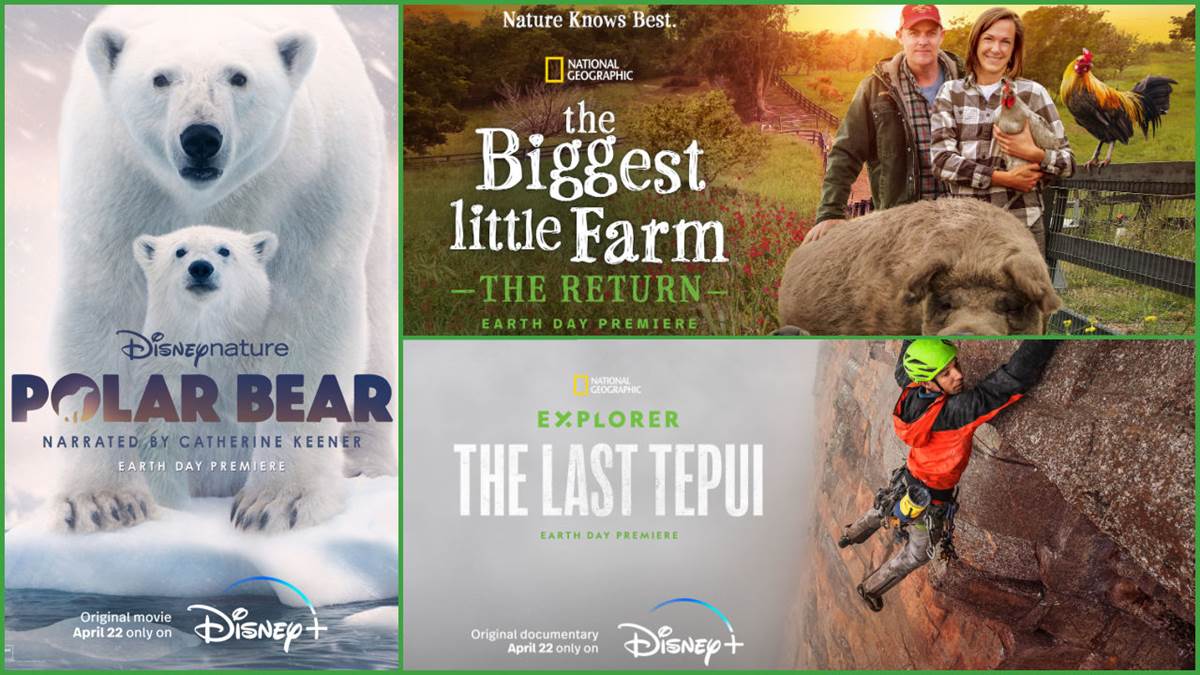 Like most Disneynature films, Polar Bear is about parenthood, one of the few times you’ll see these solitary polar giants being social. “The good thing about mother bears is that they have babies that stay with them for two or three years and polar bear cubs are possibly the cutest animals on the planet,” director and producer Alastair Fothergill explained. “Jeff [Wilson] and I decided very early on that our story would not be just two or three years of a mother bringing out one set of cubs but it would be the memories of a 15-year-old bear looking back from the day that she was born until she reached 15, and that decision was based on the fact that it allowed us to look at global warming changes over that period and where we made the film, Svalbard, just 700 miles south of the North Pole, over the last 10 to 15 years, there has been very significant change.” Spanning a decade-and-a-half, Polar Bear not only tells the story of a single animal but also showcases the habitat loss the species is endangered by.

“Nothing really could've prepared us for the remoteness,” Explorer: The Last Tepui director Taylor Rees explained of the region explored in the special. “It was kind of like wading through chocolate pudding essentially for ten straight days of walking. We also had Bruce Means with us who is the reason that we were all there, to support him on his swan song expedition of moving through this landscape and discovering new species. And he's 80 years old and 300 pounds, so we were kind of moving at his pace. But in the process, slowing down and seeing so much more than we ever would have, slipping off of a lot more slippery log bridges perhaps than we ever would have too.”

Explorer: The Last Tepui includes a familiar face from the Oscar-winning documentary film Free Solo, Alex Honnold. “In this particular case with climbing tepuis, the filming on the wall was actually probably easier than the filming in the jungle to some extent,” the famous climber revealed. “I think once we made the wall and we were doing the first ascent of this new wall, we all felt slightly more in our element than we did in the jungle, actually, but I think that the film crew really struggled with fogging of the lenses and everything being wet all the time and everything being muddy and impossible to keep things clean. Basically, everything was a struggle, and then once we got to the wall, I think for most of us, we were like, thank goodness.” That is saying something because the climbing portion of the special is nothing short of exhilarating.

The world was introduced to John and Molly Chester in the documentary film The Biggest Little Farm in 2018 and the new half-hour special, The Biggest Little Farm: The Return, provides an update on their sustainable living initiative. “Looking at what we experienced over that ten years if we didn’t communicate to the world that there is this incredibly powerful resilience that exists within nature because all we ever hear about is how terrible it is and how we've lost biodiversity but with just a little bit of consciousness, we were able to tap into this resilient force of nature that just brought so much hope to both of us,” John said of the rewarding experience of starting Apricot Lane Farms and documenting it for the world. “The farm is a microcosm of the planet. It all works the same way, and so that was really important.”

“We do weekly farm tours here at the farm,” Molly shared about helping to inspire others to live sustainably with the land. “It does feel like there are these little seeds that have spread across the world due to this” This Earth Day, be the seed in your community by watching all three specials and taking their messages to heart.