With that in mind, I want to take a look at some of my favorite comic panels. I will select one panel from a new Marvel comic as a “New Favorite” and one panel from an older comic as a “Classic Favorite” and provide some context as to why those two panels are so great. Sometimes I might get a little loose with what I consider a “panel,” because comics tend to play by their own rules. But at the end of the day, we’ll have two glimpses of two great Marvel comics, one old and one new.

This is totally not influenced at all by this week’s release of the first teaser for Thor: Love and Thunder. Jason Aaron’s run on Thor is a great, ominous slow build to the reveal of Gorr the God Butcher has the villain who has been slaying gods left and right.

Thor seas a whole lot of brutal death in the early going of this run, but this panel, in particular, really hits emotionally. It doesn’t exactly seem like Thor would have considered this massive beast to be a friend, but he is clearly affected by seeing that he has been killed. And no one wants to see a sad Thor.

There’s also the visual component here. The stunning artwork of Esad Ribic really pulls this whole scene together and lets you feel the emotions Thor is feeling. Plus, it looks like there’s a shot in the upcoming movie that is pulled right out of this panel and that’s really cool. For a look at what I’m talking about, check out my breakdown of the teaser which I so conveniently linked up above. 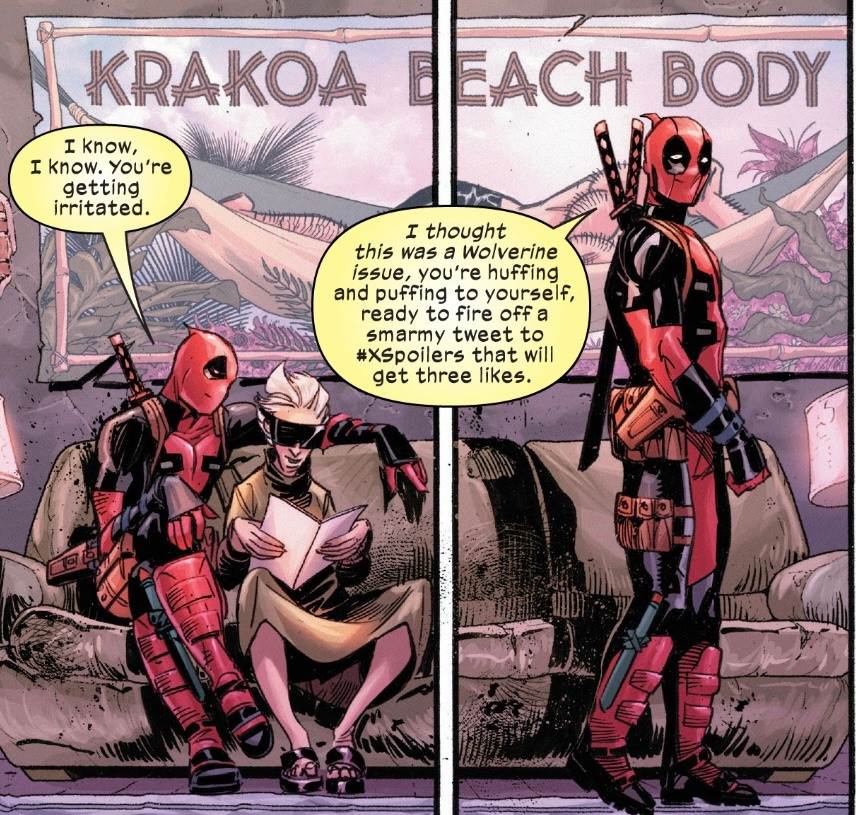 Deadpool. Need I say more? What, really? I really do need to say more? Alright fine, but “Deadpool” really should be enough. How about the fact that the title of this comic is “Wolverine” and most of it is actually just Deadpool complaining that the mutants haven’t accepted him as one of their own?

And yes, I’m aware that I’m cheating again here by choosing two different panels but hey, I make the rules so… you know… shut up. Plus, Adam Kubert made it too easy for me to take both by having Mr. Pool’s speech drift into two different panels. We in the bis call that a two-for-one.

There are so many great things about Deadpool but my personal favorite has always been his comic awareness. The fact that he not only takes over the first half of a Wolverine comic but then points out that he KNOWS he took over a Wolverine comic, is what makes this character so great.