Shinji Takahashi and the Mark of the Coatl is a rip-roaring adventure that is set in the world of the Society of Explorers and Adventurers (SEA) which is the backdrop narrative for multiple Disney Parks attractions such as the Jungle Cruise. The book is set in the modern day and readers are thrust into a compelling and thoughtful adventure about how we remember the past, and the importance of preserving the natural world. 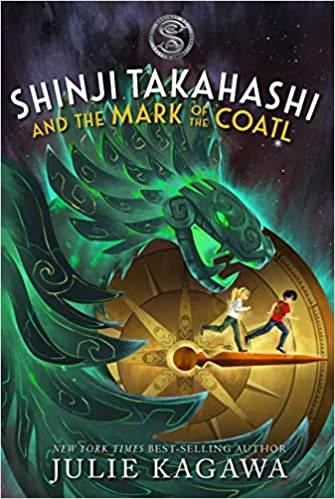 Shinji Takahashi is a teenaged boy, who lives with his aunt Yui, and spends all his time on her boat the Good Tern, traveling the world, meeting a variety of people, and collecting numerous trinkets from all over the globe. As exciting as this may be, Shinji just wants to be a normal boy, with some friends.

When Shinji bonds with a mystical artifact, the Coatl, his life turns upside down. Kidnapped by the Hightower corporation, which is led by megalomaniac Gideon Frost, Shinji learns the truth about the artifact that is now tattooed on his arm – magic is real.

While he is imprisoned by Hightower, Shinji makes friends with a girl named Lucy. Though she lives and works at Hightower, (and is Gideon Frost’s daughter) Lucy can’t bear to see Shinji hurt and helps him escape. Shinji is clueless about what is happening to him, so it’s up to Lucy to help Shinji find the Society of Explorers and Adventurers (SEA) and return the Coatl to its rightful place.

A cross country trek leads Shinji and Lucy to the doorsteps of SEA and their members Oliver, Professor Carrero, Zoe, Priya, and Maya. Recognizing the danger Shinji is in, they agree to help, and Shinji and Lucy must learn to trust their new friends because they don’t have a choice.

With SEA helping, the chase begins with the characters navigating the jungles of Mexico. Chased by Hightower, facing danger at every corner, the fate of the group will depend not on the might of their weapons, nor the intelligence of SEA, but the compassion of Shinji.

I knew little about the Society of Explorers and Adventurers until reading Julie Kagawa’s masterful book. Having been to the Disney Parks, and riding certain attractions like the Jungle Cruise, and being old enough to remember the excellent Adventurers Club at Pleasure Island, I am familiar with the lore of this storyline, but thanks to Kagawa, I want more. So much more.

Kagawa has taken a well-liked world that is rampant throughout the Disney Parks and created her own spin on the story, placing it in the modern day, but making the narrative a throwback to the adventure serials of the 1930’s. If you are a fan of Indiana Jones, you are going to love Shinji Takahashi and the Mark of the Coatl. Not only are the lead characters likable, filled with the spunk of smart-alecky teenagers who are good kids, but readers will identify with them for their pure heart.

The supporting cast of characters is filled with trademark adventurers that are essential to flesh out the cast. Oliver Ocean is my favorite, because he is the tough get it done ex pirate treasure hunter, who is not above complaining about the difficulty, but ultimately is the one you want on your side. Oliver won’t let you down, but he may complain about the work.

Shinji and Lucy are a unique pair. They come from two different worlds, but their isolation in their environments make them the perfect team. Each believes in and ultimately trusts the other, despite initial reservations. The ability to trust is something that Shinji has had to learn on his own. Since the loss of his parents all he has ever known is life on the boat with his aunt. Alone for the first time, Lucy is a perplexing character because she seems like someone Shinji shouldn’t trust.

While the book culminates in a wonderous battle in a hidden temple in a remote part of Mexico, Kagawa used this book to help readers examine how the natural world has been treated and our own preservation of the past.

Having known little about SEA or the characters that fall into this narrative from the Disney Parks, I am so happy to see this world being developed beyond props and signs, and given a chance to live on the page.

Grab your fedora, and lace up your boots, because Shinji Takahashi and the Mark of the Coatl is going to launch a whole new franchise that will make readers crave more. A four star treat that makes me want to go out and explore.

I wonder if there is a local chapter of the Society of Explorers and Adventurers nearby.