The next big MCU film is almost here. The stars and creators of Marvel’s Doctor Strange in the Multiverse of Madness sat down today for a virtual press conference to talk about the evolution of their characters, keeping MCU secrets and much more.

With the MCU entering a new phase, Cumberbatch was asked about Strange’s progression as a character, going from more of a supporting piece to one of the heads of the franchise.

“He’s quite a maverick, he’s quite an outsider. He doesn’t immediately strike you as a leader despite his prominence in the MCU at this moment,” Cumberbatch said. “But I will say this, he’s far better at being a collaborator, at working with others, at realizing he can’t always be the one to hold the knife and control all himself. So those are pretty leader-like qualities, I’d say. He’s evolving.”

Cumberbatch was also asked about exploring different versions of Strange, not only in this film but also in the Disney+ animated series What If…?.

“This multiversal narrative structure or idea is like it is in our own lives. We play multiple roles, we have an incredible capacity and imaginative space in our subconscious to imagine ourselves into different circumstances in our dreamscape and I feel that this is an extrapolation of that in the sense that he’s meeting other versions who are essentially him but they’ve made different choices in different circumstances with different outcomes,” Cumberbatch said. “And just a lot of fun as well, to sort of shift up the look. To shift the attitude or the mannerisms or the abilities and show same, same but different.”

The accomplished actor was also asked if he considered Doctor Strange to be a career defining character for him.

“It’s given me scope and freedom to support and nurture and finance smaller, delicate difficult stories and issues that otherwise I wouldn’t have been able to shine light on either as a producer or an actor,” he said. “So I’m incredibly grateful for that opportunity, let alone this richly complex and rewarding and fun character to play. I mean, I love being your Doctor Strange.”

As for another character who has been developing over the course of multiple films and, most recently, her own Disney+ series, Elizabeth Olsen was asked about how Wanda has been progressing.

“I feel like in the previous films before WandaVision, I took up a lane for storytelling that was more grounded in sincerity, love, loss, grief and with WandaVision I got to become anything and everything and really grow her into a woman and leading her into accepting that she is this mythic woman and that that is her destiny,” Olsen said. “And I hope that, in this film, people see that continuation of her acceptance of who she is and the journey that she has taken to get to this moment. I feel like she has way more clarity now than ever, in this film.”

Like Doctor Strange, we are also going to see different versions of Wanda in this film and Olsen explained a bit about what that experience was like for her.

“I do feel like we’re exploring something that I haven’t been able to explore yet with the character and really is I think just about this clarity and this confidence,” she said. “I do think that she has learned so much and has a sense of confidence that we haven’t seen of her yet.”

Olsen also shared an interesting perspective that she brings to the character when she plays Wanda now, after the character has been through so much in the MCU.

One character who does not need to be defended these days is the Sorcerer Supreme himself, Wong. Benedict Wong was asked about the hot streak his character has been on recently.

“As a comic book fan and having collected all the Marvel Comics, to be on board I’m just living this dream really as kind of the nerd who’s crossed the line,” Wong said.

Wong has now appeared in several Marvel films, including most recently Shang-Chi and the Legend of the Ten Rings and Spider-Man: No Way Home, and Benedict Wong was asked about how the character has evolved since his first appearance in Doctor Strange.

“When I first took the job six years ago, we moved away from the source material, which was old, and we developed and crafted this no-nonsense, field general librarian who has continued through four or five of the movies and now is the no-nonsense Sorcerer Supreme,” Wong said. “And I love where we’re going with this and the character progression of that.” 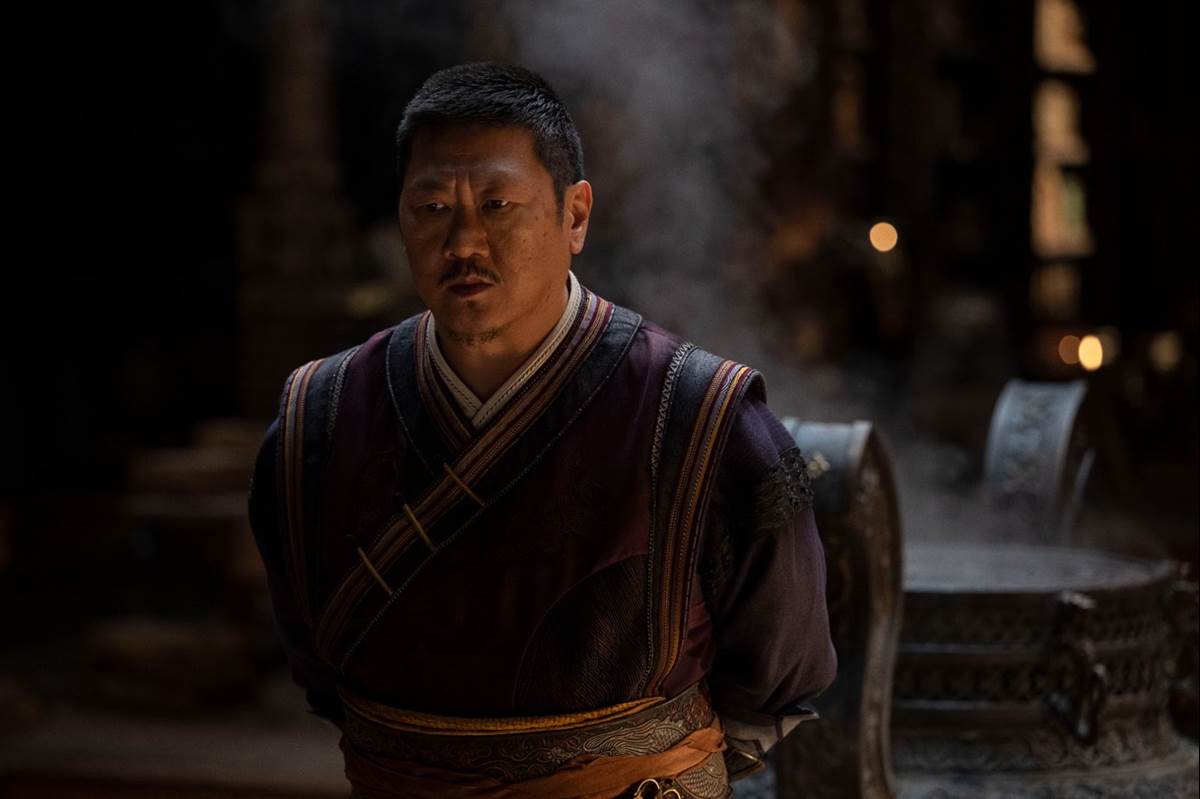 Not all of the actors on this panel have been in the MCU for multiple movies though. Gomez will be bringing America Chavez to the screen for the first time and was asked about her new character.

“One thing that was so important to me was that, you know this is a very adult movie, there’s a lot of adults in it, it’s very heavy, and so I wanted to make sure that America still had that youthfulness and still had that fake-it-till-you-make-it you know, just resilience,” Gomez said. “But you know, when you’ve got some crazy stuff happening, it’s a little hard.”

Jumping into a lineup of incredibly experience MCU veterans, Gomez was asked about who she watched for inspiration as they shot the film.

“In particular, I did look at Lizzie [Olsen], especially while she was acting and getting ready to do the scene I would just kind of watch her. I swear it’s not stalker-like,” she laughed. “She just such a powerful woman. I mean, especially me, as a young girl, I would constantly look up to her. And I realized how much, you know, five minutes before a scene that’s kind of difficult, she would kind of get in that moment and I realized that ‘of well, if she’s doing it, I should probably do it too.’ And so I did to that and it helped me, I just learned so much from her and she doesn’t even know it.”

And speaking of America, much has been made about the LGBTQ+ history and nature of the character and Feige was asked about what the thought process was behind that.

“It’s important, as we always say, that these films represent the world as it is and the world outside your window as they used to say in publishing,” Feige said. “And that aspect of America’s character is from the comics and we always want to adapt them as well and as truthfully as we can. And I think when people see the movie, much like in life, it is not any one thing that defines any one character.” 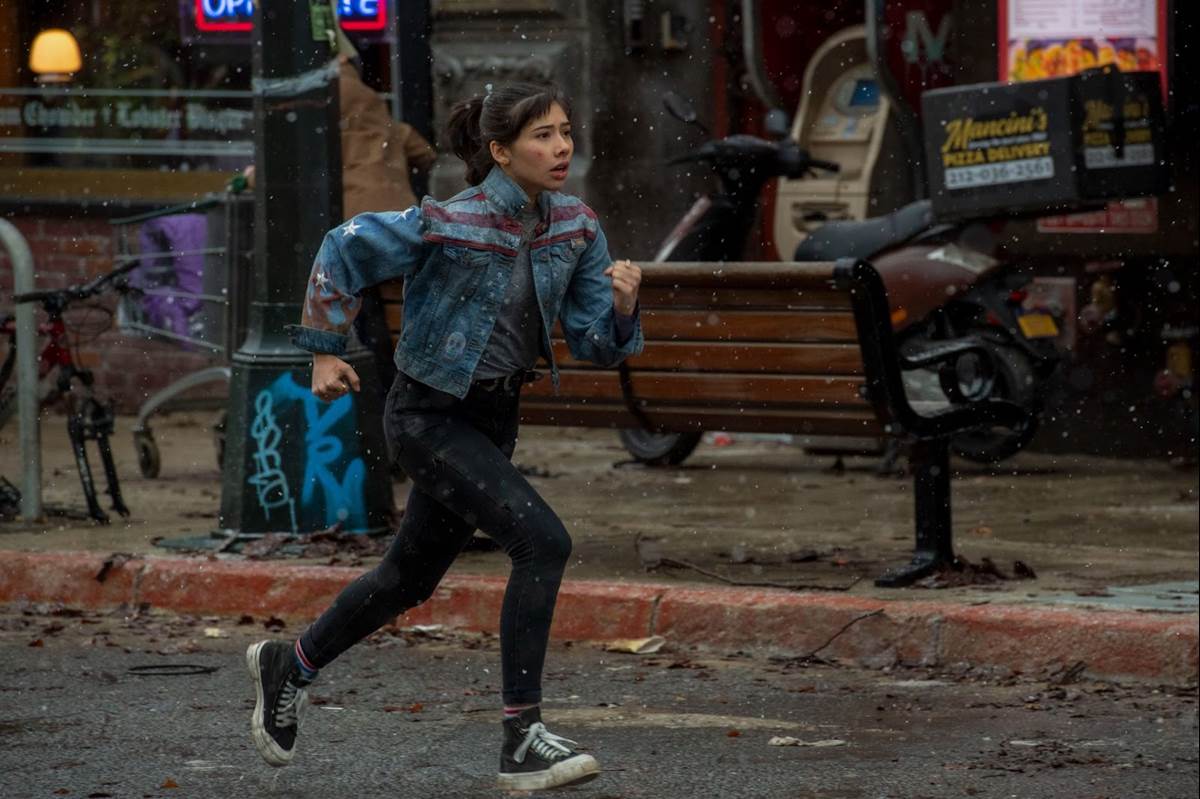 With fans expecting a lot of surprises in this film and with so many rumors out there, Feige was also asked about how they keep things under wraps before a film’s release.

“Well the unfortunate truth is, you don’t,” Feige laughed. “And therefore you need to make sure that the experience itself works regardless of what has been spoiled or not.”

It was mentioned that Feige got his start working on Marvel films in 2002 with Raimi’s Spider-Man and was asked about what it’s like reaching this 20-year milestone.

With it being 20 years since Raimi’s first superhero movie, Raimi was asked about the differences between making a movie like that now versus then.

“Well the technology has changed and it’s just become a lot easier,” Raimi said. “The thing that didn’t change, is how I want to answer this question, the most important thing is having great actors like these two, like this gentleman [Cumberbatch], like this young lady [Olsen], and them knowing that the most important thing they can do is recognizing the humanity within themselves. That’s how people connect to our superheroes.”

With Raimi having a great deal of experience in the horror realm, he was asked about bringing those elements into this film.

“When Kevin announced that this movie would be the first entry into Marvel putting their toe into the world of horror, I was thrilled that he called me to come in and talk to about the possibility to directing the picture,” Raimi said. “I was able to take those horror films that I made in my youth and what I had learned from them, building suspense sequences, titillating the audience, going to give them the scare now, no… NOW! That’s stuff I was able to apply to the spooky sequences in this film. So it was very helpful.”

Finally, Waldron talked a bit about the ever-changing script and the adaptations they made as this film progressed.

“I had the great benefit of kind of inheriting the bulk of these character and so I think that was what certainly centered me creatively,” Waldron said. “In a lot of ways, I was just a steward of these characters on the page and so there was a lot of opportunity to collaborate with these tremendous actors who know them better than I could.”

Waldron was also asked about the ever expanding MCU and talked about how this film is the next step into the magical realm, while carefully trying to avoid letting anything slip.

“We expanded. It’s an expansion. It’s a sequel so…,” Waldron sighed as the group let out an anxious laugh. “I think that the first movie was very much about Stephen Strange entering this world of magic and learning about it and everything and beginning to master it. And then we had Stephen in several other movies, in the Avengers films and in Spider-Man: No Way Home, this the first time really in a movie that is his. And this is our chance to focus on that magic and check in on what does it look like, you know, five years on, however many years on, this guy who was the greatest surgeon, now he’s been a sorcerer for a while, he’s been through a lot. How good of a sorcerer is he? We’re seeing him kind of at the height of his powers. And I think that’s really exciting and then at the same time, you’re encountering Wong who has become Sorcerer Supreme. He’s at the height of his powers. And then you have Wanda, who is actualized in a whole new way from the end of WandaVision so you could say she’s at the height of her powers. So yeah, I guess we’re expanding.”

Marvel’s Doctor Strange in the Multiverse of Madness hits theaters on May 6th.