Tonight marked the return of one of viewers favorite entries in the ABC Summer Fun and Games block, now in its fourth season, Holey Moley. 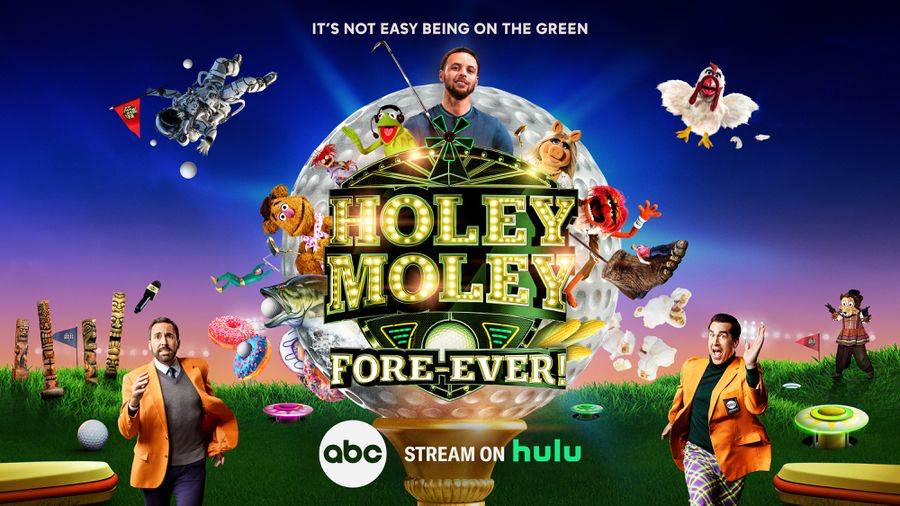 However, this season is already just a bit different and viewers aren’t the only ones to notice. As host Rob Riggle realizes he may or may not be out of a job as clues indicate he has been replaced. Right down to Joe Tessitore seen in his trailer conversing with a possible Rob replacement (who seems to be some name athlete considering Joe’s ESPN day job, but don’t ask me, sports aren’t my forte). Somehow, this translates into the show being canceled and in the lobby of the ABC building in Burbank, Riggle comes across Muppet icon, Kermit the Frog. Unrelated to anything, am I the only one who still finds Kermit’s new(ish) voice (by Matt Vogel) absolutely jarring? Then, in a turn of events, Riggle decides that he must recruit Kermit and the Muppets to help him save Holey Moley…Fore-Ever! You know,  like this season’s title! 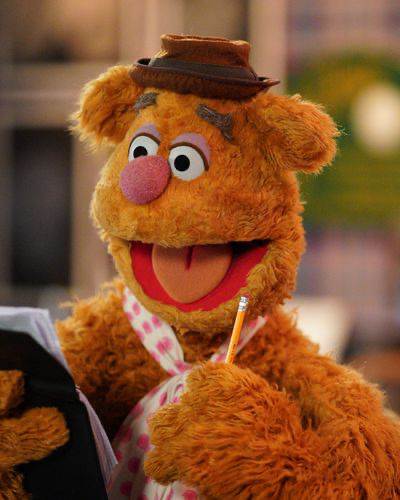 Even though the series seems that it will now be peppered with favorite Muppets, it’s still the same Holey Moley we love with challenging holes for our miniature golfers, who must go through extreme obstacles as part of the mini-golf course. Each episode features eight contestants that is whittled down to a final two with the winner of that round winning the coveted golden putter and plaid jacket before moving onto the season finale where they’ll have a chance to win the $250,000 grand prize. 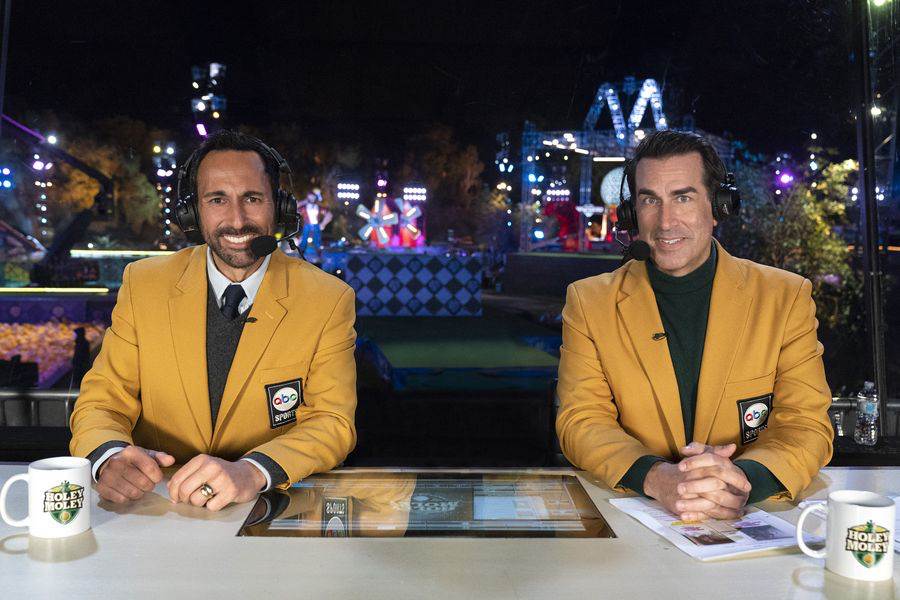 The first hole? The brand new hole this season, The Trap-Tee-ze. Challengers Nick and Stephanie take on the hole where mini-golfers must launch their ball onto the green with a powerful putt before taking on some aerial acrobatics of their own on a real trapeze setup. There, they must be caught by/ride aboard a dummy (modeled after Rob Riggle) onto a floating “green” in a pool. Assuming they make it that far, right Stephanie? (Spoiler: She immediately went into the water and might as well have just dived from the platform she was on) Before we find out who wins though, we must of course see the first time of what I’m sure are many times we’ll see what golf pants, or in this case golf shoes, that Rob is wearing in the booth. After some short putts, Nick takes the win for the hole and is on his way to the next round. 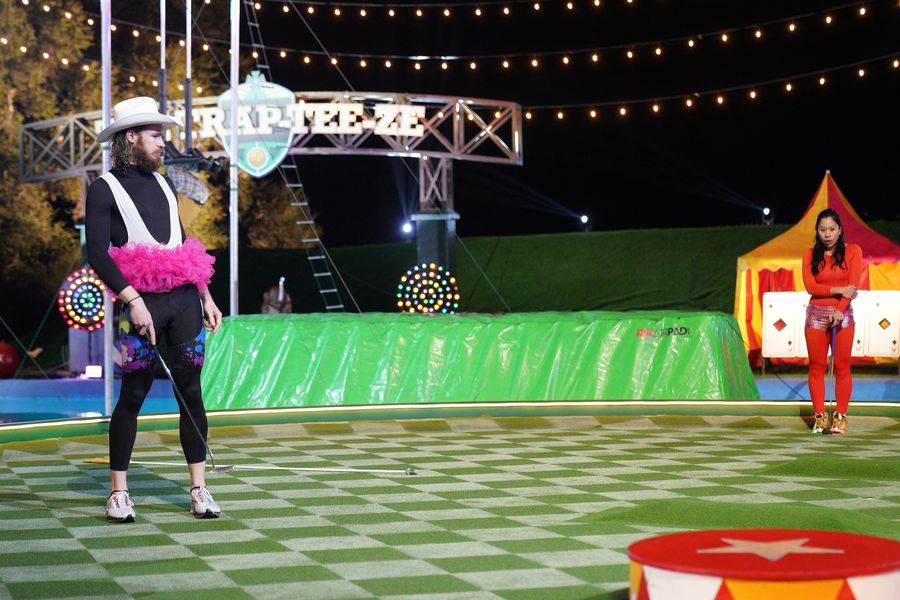 Then, we get introduced to a new segment this season, “Rob Riggle Attempts to Save Holey Moley.” In this entry, Riggle discusses with Fozzie Bear new ideas to help save the show. Fozzie pitches a hole where players have to swim across the Atlantic Ocean and of course, has plenty of puns. The ominous “To Be Continued” means we will likely see more of these segments throughout the season. One of the more popular holes from last season has returned because viewers apparently love watching players get blasted in the face by an airbag that looks like a popcorn kernel. But who am I to judge because I was delighted to see it back myself! Tonight, Kasey took on David, The Lederhosen Golfer in the returning favorite where players must run along an exploding ear of corn to get to the green (and their ball) without incurring a stroke penalty. Tragically for David, when he took off for his sprint, he ran right into the corn itself, bouncing off of it and into the pool of foam kernels before the exploding pops even took place. Even though Kasey faced his own challenges, he ended up winning the round. 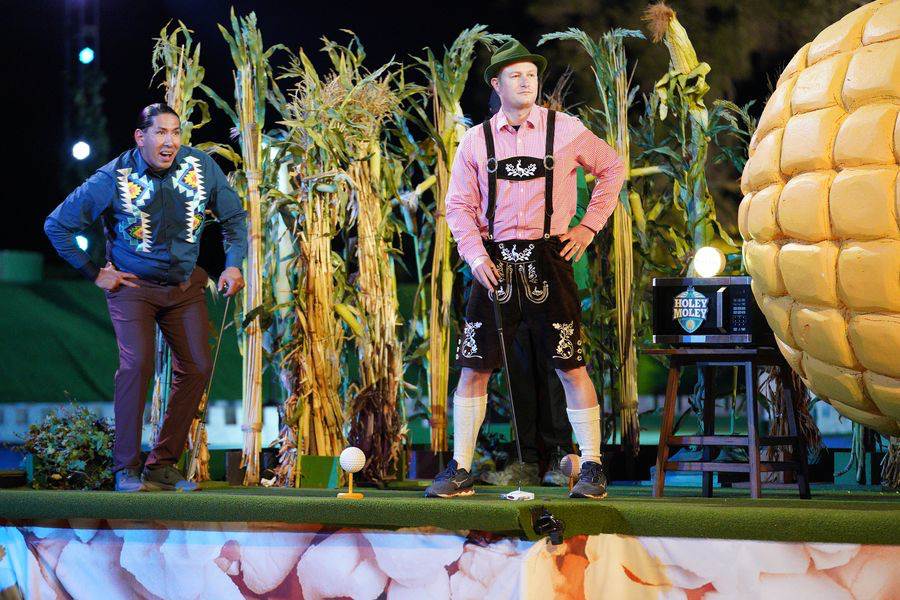 In my opinion, one of the more lackluster holes from last season has returned, and it’s the Donut Hole, where players simply jump through swinging donuts above foam “sprinkles.” While Gabriel and Jaime both took on the hole, even the producers thought this hole wasn’t thrilling enough for tonight’s episode and had Joe give a brief recap that culminated in the fact that Jaime wins. 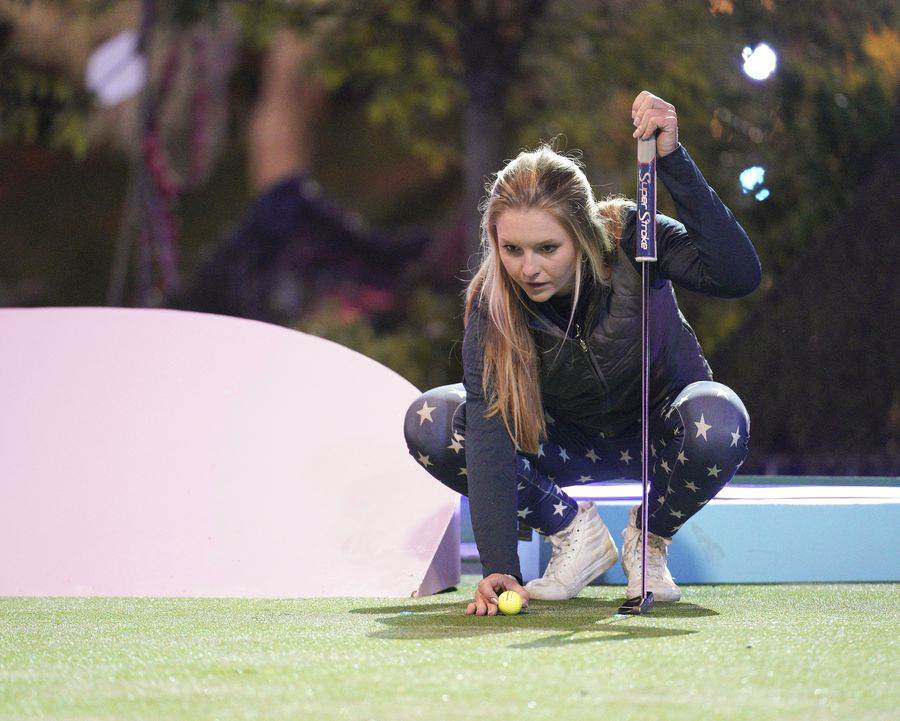 Another Save Holey Moley Attempt, this time Riggle is seen with Swedish Chef, Animal, and Camilla the chicken all discussing big finale ideas to help save the show. Animal is stuck on bananas since Riggle mentioned a finale that will make ABC seem  “cuckoo bananas” to get rid of the show. Tragically, these characters aren’t the best in terms of diction and Riggle and his smartphone translator are proving no help to gathering their ideas. 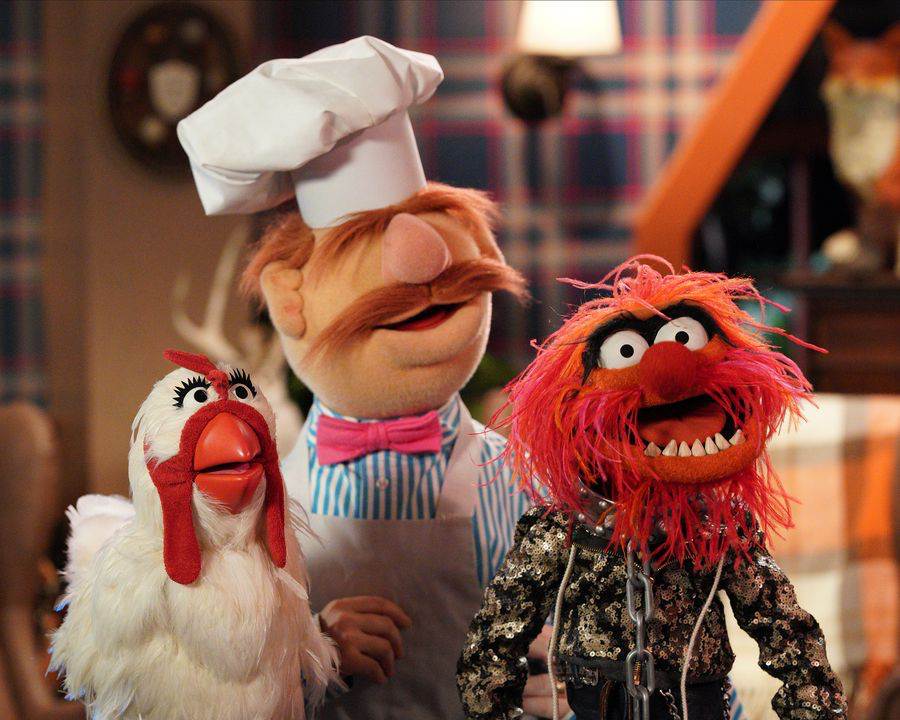 Finally, the meat and potatoes of the show arrives with the return of another fan-favorite hole….FOR A REASON. Dutch Courage En Fuego is back with no visible change (thankfully) and is ready to send players violently into the pool below with its rapidly moving windmill blades that they must traverse between putts. Tonight, Matt and Michaela must navigate the challenge. While Michaela does it with relative ease, it’s Matt who gets pummeled by the windmill blades, not once but twice, to the great amusement of viewers everywhere as well as Joe and Rob who are now making GIFs in the booth featuring the moment. Oddly, I was more disappointed with Riggle's pronunciation of “GIF,” but I still approve of their proposed crossfade billboard on Sunset. With two stroke penalties for Matt, it was an easy win for Michaela this round. Round 2 opens up with more recognizable fun, this time with Jaime and Michaela taking on PoleCano. Both competitors are college-aged sorority type blonde women, and Rob said exactly what I was thinking. Neither of us could tell them apart. Polecano sees challengers putt into a Plinko-style board to determine the placement of their ball before they grab a bar and escape an erupting volcano and try to land on a pole in the middle of a pool. Landing in the water incurs a stroke penalty. Tragically, Michaela seemed to have forgotten the whole letting go of the bar bit and literally sees the mechanism, as Rob says, “try to shake her off.” And even though Jaime did ALMOST the same thing, she got the better Tiki shot on the plinko board putting her right near the hole and securing the win. Now, for another segment, this time called “Rob Riggle Recruits the Muppets.” This entry sees Rob in a dark corner with Pepe the King Prawn as they are trying to scheme for a way to get the Muppets onto Holey Moley. However, Rob’s threats about enjoying a shrimp cocktail are misconstrued for a dinner invitation, and we eventually see the duo heading to a quick dinner before a “To be continued” appears in the corner. Is it bad that I’m hoping for a scene featuring their dinner? 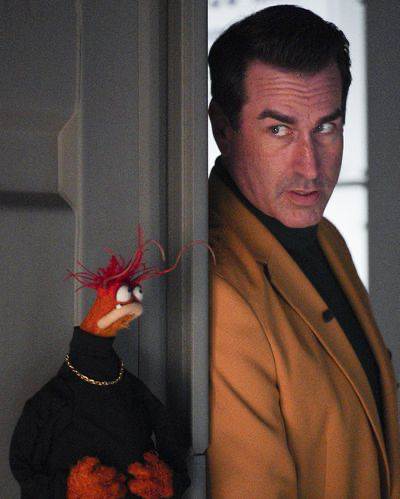 Viewers are treated to another new hole for the season, Full Mooney. Players, in this case Nick and Kasey, must launch their ball onto a moon landing-themed green but must get there themselves by rolling across an orbiting moon. Get ready for as many moon puns as you can count from Rob, much to Joe’s chagrin (this is one of my favorite things about the chemistry between the two). While the putts are nothing of note, the orbiting moon aspect of the challenge is what will get everyone’s attention. Nick tried and failed, incurring his stroke penalty, but Kasey made it far enough to jump to the green successfully, securing his spot in the final round after a successful putt on the green. Also, I’m pretty sure producers added a laugh track to Nick’s “One Small Putt for Man” line and it was so forced it worked beautifully well as a piece of ironic comedy.

With round two complete, we now have our players for the final hole in tonight’s episode, another new one this season: HoleyWood. Here, our players Jaime and Kasey must run down the accelerated red carpet to the floating stars of the Holey Moley Walk of Fame which does NOT feature Rob Riggle, but does hold a star for thee singular most important star of the series, Sir Goph. This hole will also look vaguely familiar to the wedding-themed hole last season, Holey Matrimony. This hole also marks the first mention of Course Marshall Joe this season, who apparently has the trendiest hat around and has been responsible for the sales of them from coast to coast. Both contestants were able to land “safely” on the floating stars of the walk of fame, with their balls being placed in a corresponding drop zone. Jaime took an amazing swing and secured the win, earning the gold putter, plaid jacket, and her place in the finale for a chance to win $250,000. 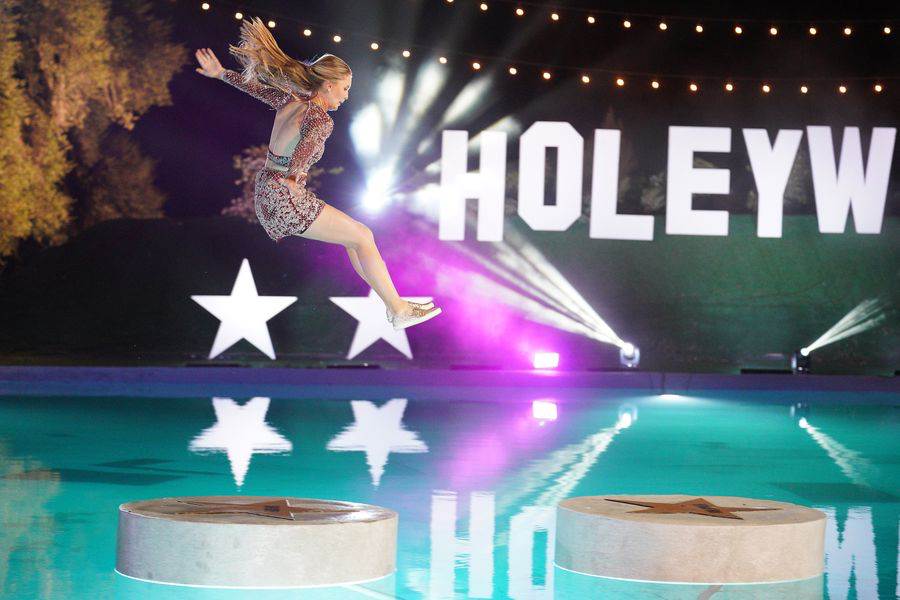 Did you miss this episode of Holey Moley: Fore-Ever! When it aired? Don’t worry, it’s available as part of next day viewing on Hulu.