Holey Moley: Fore-Ever is back and Rob Riggle continues his quest to get the show renewed, but in the meantime, we have more of the most extreme miniature golf course to enjoy in its fourth season. We are quickly reminded of what happened last week, when Rob recruited Pepe for help. However, Steph Curry is nowhere to be found and we are shown last week’s winner being awarded the plaid jacket and golden putter by Course Marshall Joe.

But the game needs to go on, and it's on to round one with Keeley and Nate. We see another returning hole from previous seasons with the return of “The Fishing Hole.” Nate is a self proclaimed superfan of Holey Moley and is even dressed like Rob Riggle, with Joe pointing out that he is wearing Rob’s outfit from Season 2. This of course leads to squabbling between Rob and Joe regarding the outfit, but we’re here for golf (okay and the squabbling too), and even though both contestants end up in the water, Nate wins the round. What he doesn’t win, or maybe he does, is the favor of Rob, who keeps going back and forth between hating him and liking him. 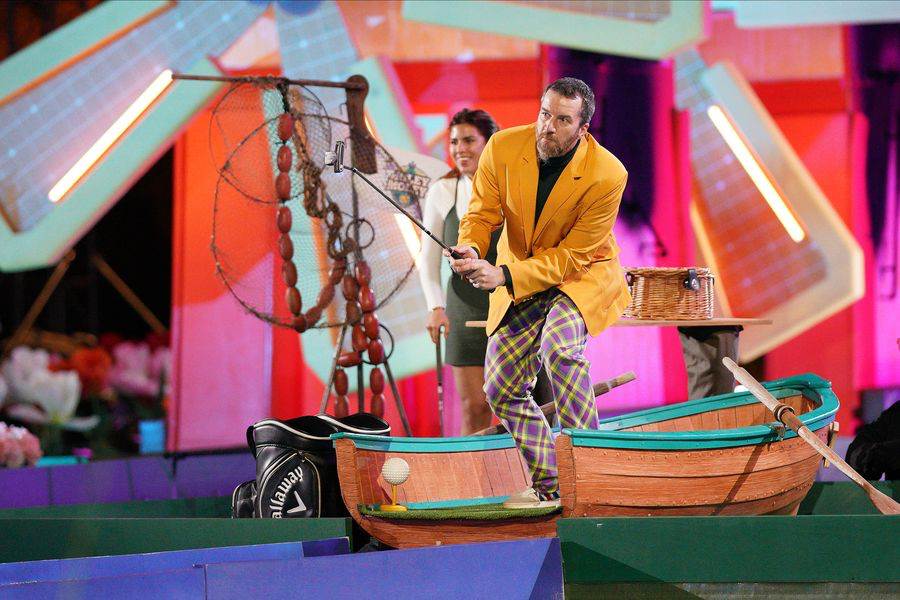 We now head over to PoleCano where Gari and Bob take on the hole. Rob feels that this hole is surrounded by some kind of The Brady Bunch style curse. A reference that’s sure to go over like gangbusters on a show that gets its contestants mostly from TikTok and Instagram. Gari actually launches his ball into the proper channel that will take it to the Tiki position, a prime location for putting once on the green. However, Bob somehow triggers the curse when his ball goes missing in the plinko portion of the hole. Don’t worry though, Course Marshall Joe is on the case. Which means they’re just going to stare at the board until the ball reappears, which it did. Though Bob sticks the landing when he gets blasted into the pole saving himself a stroke penalty, Gari thanks to his advantageous lie takes the win. 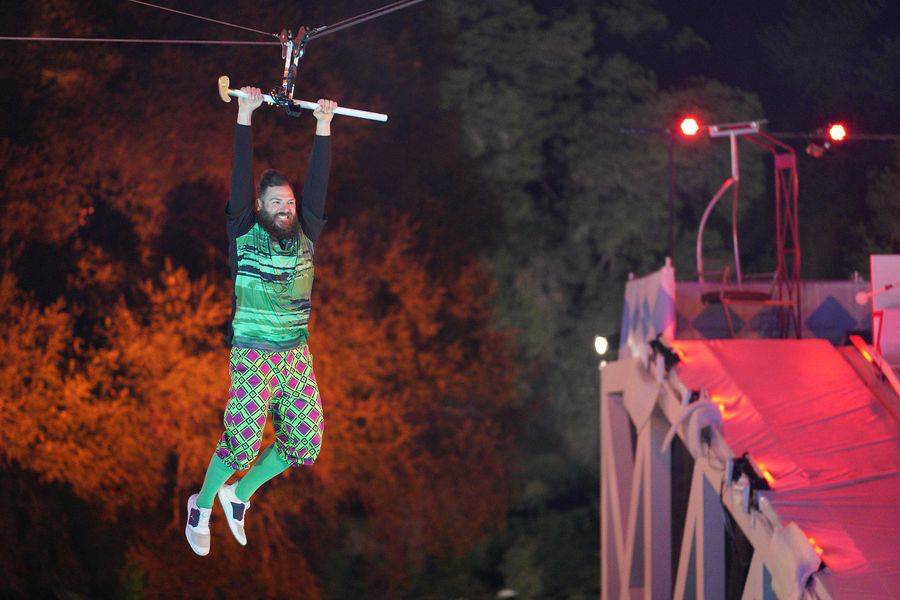 It’s Jules Vs. Alexis on Hole Number Two, another returning favorite from the series. Though, tonight it didn’t remind us why it's such a fan favorite because both competitors made it safely to the other side of the porta potties without getting knocked into the muck below. Jules had the putting advantage though since her ball didn’t go into the water and wins with one of the best putts we’ve seen on the show, over the hill and everything, securing the win. Rob is in the booth when Muppet friend Pepe calls in front of Joe. Turns out, Pepe has kidnapped Stephen Curry and is holding him for ransom until ABC renews the show. Rob tells him what’s going on, but Joe’s only advice is that he needs to call a lawyer. 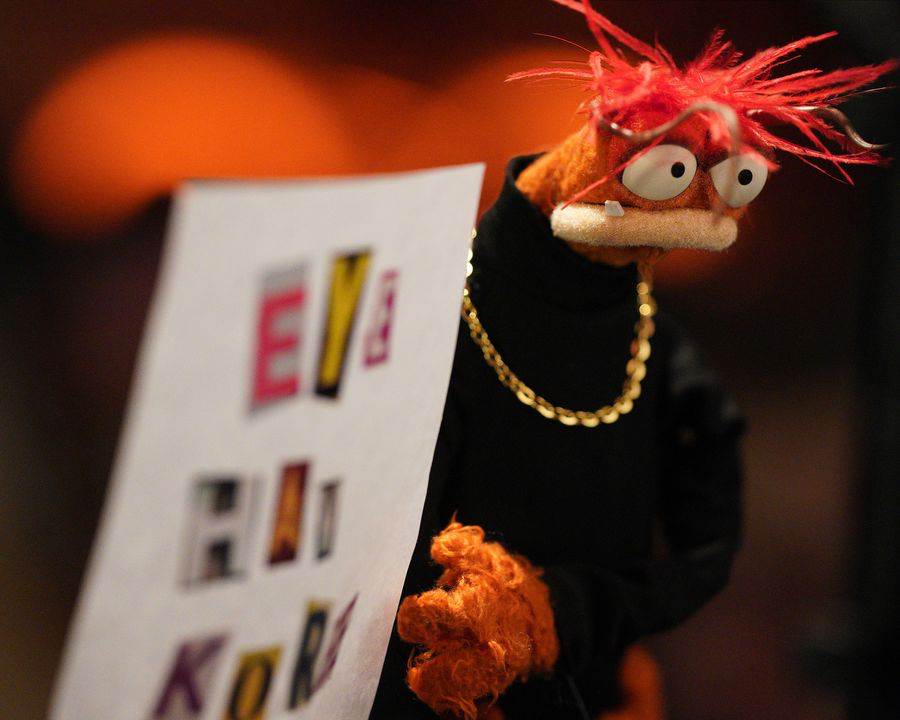 Now we head down to the last match of the first round, and see Reggie vs. Amanda on Dutch Courage En Fuego. Amanda makes her putt and gets pummeled by both windmills, but Reggie gets hit by the first windmill and manages to stay on the platform, but the second one finishes the job and knocks him into the water below. Reggie is also known as “Two-Putt Shakur” because he is known for always getting the ball in the hole in two putts, and this hole is no different, where he secures the win. Rob also reminds us of the hits he took, and keeps rewinding the footage. Now, it's time for another segment of “Rob Riggle Recruits the Muppets” where Riggle meets with Kermit and discusses how to save the show. Kermit, in his infinite wisdom, shares that in this instance he would always ask himself, “why do I really want this?” Rob answers with superficial answers like, “To be on TV” or “To pay for my expensive sportscar” before misinterpreting everything and taking it as a suggestion for a huge finale, and Kermit gives up and suggests that Riggle talks to Miss Piggy instead. Perhaps we’ll see that next week.

Kicking off round two, Nate and Gari take on HoleyWood, which we saw last week. The accelerated launch into the Holey Moley Walk-Of-Fame makes me feel sorry for everyone’s rib cage as they always seem to crash directly into their midsection. Nate has a distant putt but sinks it easily, securing his advancement to the final round. In doing so, he said he remembers a dream where Rob Riggle visited him. Rob says he remembers visiting him in a dream but not promising a win like Nate had said.

Jules and Reggie get to take on another new hole we saw last week, Full Mooney. Reggie landed his ball right near the hole, but still had to get across the orbiting moon and fell pretty quickly. Again, sticking to his nickname of “Two-Putt Shakur,” he got the ball in the hole in two putts, and will see Nate in the final round. 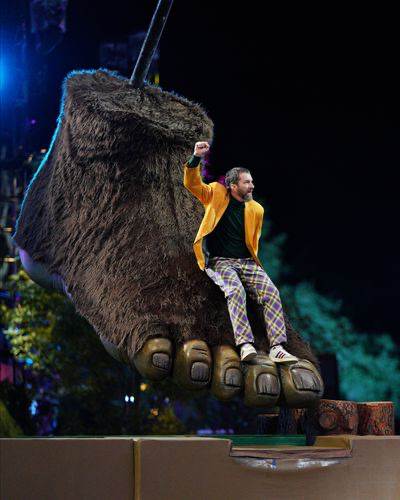 New for this season, the final round will take place at the Big Foot Wedge hole. Here, the contestants make their putt and then they must swing off of a giant big foot pendulum and land on a giant golf ball. And if that isn’t intimidating enough, Sasquatch himself is on scene to cheer on the players. The pair is pretty equally matched and the two end up going into a putt-off. From there, Nate secures his win and is on his way to the season finale for a chance at $250,000. 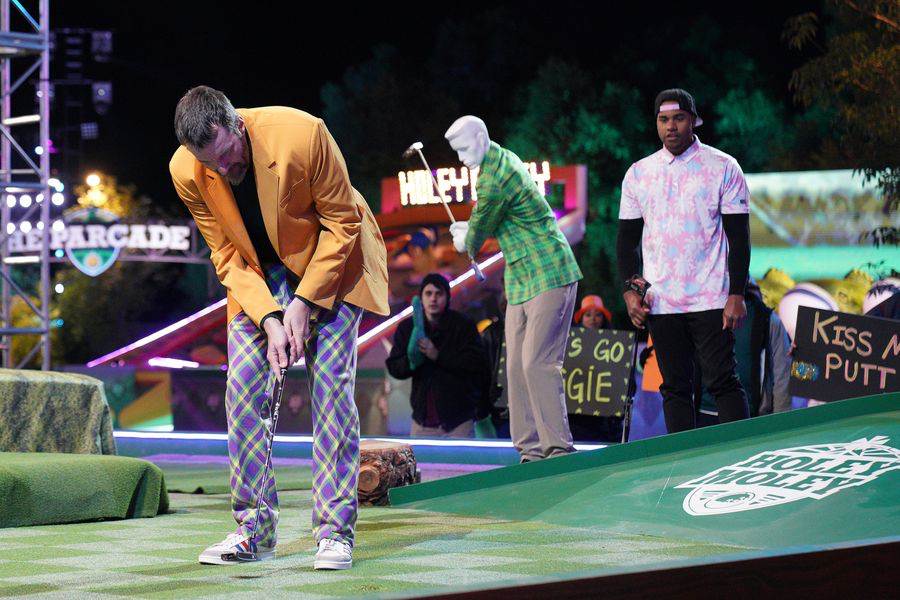 Nate meets up with Steph Curry, who hands out the golden putter and plaid jacket….is that Steph Curry though?

Holey Moley: Fore-Ever! Airs Tuesdays at 8:00 PM on ABC, and next day on Hulu.