Mickey Mouse and his pals encounter a new friend named Fig in an episode of Mickey Mouse Funhouse premiering Friday, May 13th. What sets Fig apart from other characters introduced in the Disney Junior series is that he is deaf and communicates through American Sign Language (ASL). I had the pleasure of speaking with Kate Moran, writer of the episode “The Music of the Seasons,” about the real-life inspiration behind Fig, the character’s future in the series, and her career in children’s television. Alex: “The Music of the Seasons” is a historic episode of Mickey Mouse Funhouse with the introduction of Fig, a deaf gnome. What was your inspiration behind the creation of this character?

Kate Moran: I basically have a really rainbow family. I'm half Irish, half Korean, and I grew up in South Pasadena. And on my dad's side of the family, my aunt had a dairy farm in Virginia. And in addition to her three biological children, she had taken the foster kids that often had difficulty getting placement because they were developmentally disabled or they had emotional issues or they were differently-abled. And they had problems adjusting to traditional foster placement. And from her experience, she found that when she was able to take in these kids, the routine of farm life, and also the absolute pure acceptance from the animals, they just accept you as you are, was profoundly helpful for them. And so a lot of my cousins through that, I have several cousins who are deaf and hard of hearing. And one of the things that I noticed when we were kids was like, I started writing early. I always knew I wanted to be a writer. I wanted to tell stories. I started making my own storybooks when I was four and as hard as it was for me to find characters in media that looked like me, my cousins almost never saw anyone that looked like them ever. And so I knew that when I grew up, I wanted to tell stories with characters that look like us. And that was something that I pitched to my Funhouse team. And I had said why this was personally important to me. And they were 100% supportive.

Alex: As a writer, did you get to work with the animation team to make sure that the depiction of ASL was accurate?

Kate Moran: For that part, my focus was to make sure that I got the story right. And then we worked with a really amazing consultant from RespectAbility who made sure that not only was the story told as correctly as possible, but also that, that translated visually too.

Alex: Coda recently swept the film awards season, which told a story about a girl raised in a deaf family with a passion for music. In the episode, Fig plays the drums in a band. Was there anything in particular that inspired that aspect of the character?

Kate Moran: Yes. There were two deaf drummers I am a fan of, I followed their work for a long time. One was a drummer who's … She started out hearing and she played a different instrument. And then she ended up with profound hearing loss and she thought that she would have to give up music, but then she was able to find that she could feel the beat. And so she transitioned over into percussion. And she plays barefoot and she feels the vibrations of the music. And it's really amazing. And there was another drummer. His story is basically, he was always hard of hearing, but he could always feel the percussive beat.

Alex: In addition to introducing kids to a character who communicates and experiences sound in a different way, “The Music of the Seasons” also teaches kids about the transition from summer to fall. Is there a curriculum guide or topics you’re asked to include when writing an episode?

Kate Moran: The writers brainstorm what kind of stories we want to tell. And then we pitch those ideas to our story editor and our EP (Executive Producer) and co-EP. And then we work through them and present them to the executives to see, is this a story we can tell? Can we pursue this? And so the majority of the stories that come forward, they're personal and they're passionate, and they reflect directly to our lives.

Alex: In that case, what inspired the setting of this story at the end of summer, beginning of fall, with music as an instigator for that change?

Kate Moran: Music is a huge part of my life. I play multiple instruments and I have since I was small, and fall has always been my favorite season. Growing up in Southern California, when finally the weather isn't too hot, you can go outside and do stuff. I love it when the leaves change color, it becomes very colorful and vibrant. And then also, the start of the school year always felt more like an official new year to me than January. School supply shopping is still my favorite thing. 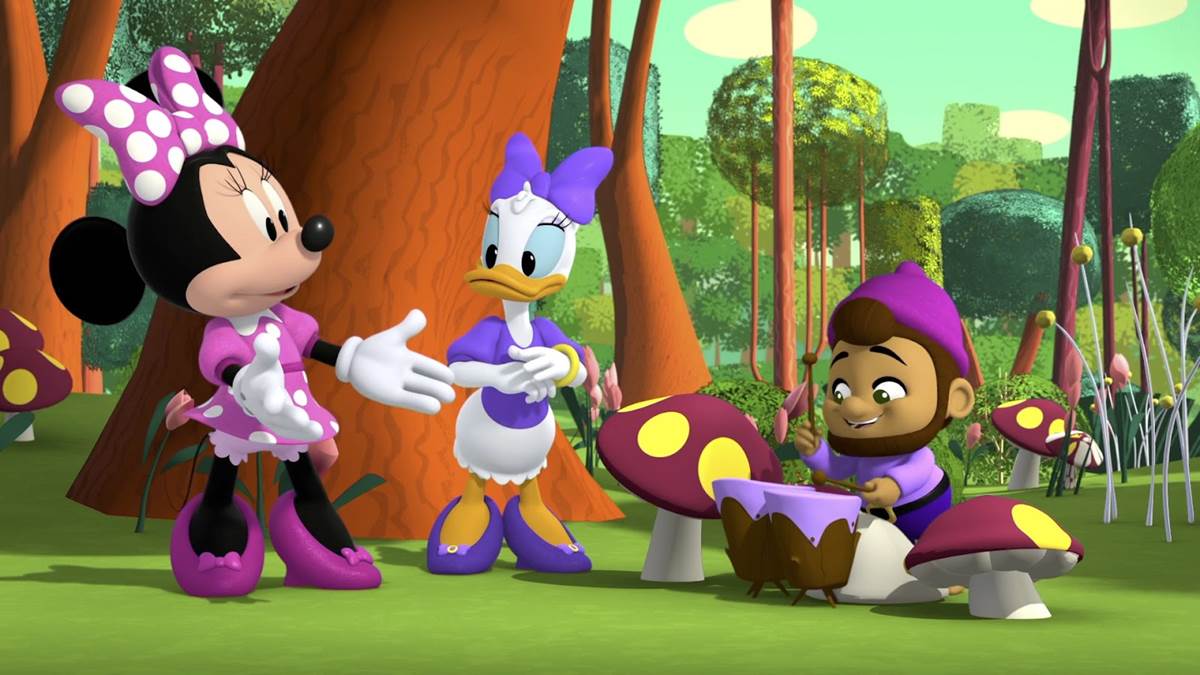 Alex: Were you always a Disney fan? Was working for Disney and writing for a show like Mickey Mouse Funhouse something you always wanted to do?

Kate Moran: Oh, I was definitely a Disney kid. My friends and I practically lived at Disneyland. Saturday afternoon cartoons were a main staple, hugely influenced by the classic Disney films. And I always knew that I would love to work at Disney. Getting in was a little maybe untraditional. I actually started out as a temp and I was able to temp as an administrative assistant in various divisions of Disney before I ended up at television animation. I loved the team there and I was able to join as a part of the operations team. So from that position, you get to meet literally everybody. So just finding out what people did, how the animation pipeline worked. Because I went to school for writing and photography, but I didn't have an animation program. And so being able to come in and work on the operations team and talk to everyone at television animation, I learned the pipeline that way. And then I got a position as production secretary on Gravity Falls. And from there, I went to being production secretary on Mickey and the Roadster Racers. And I was able to pitch an idea for an episode Roadster Racers that was picked up and I wrote a freelance episode for them. And that gave me the opportunity to be an apprentice writer on Funhouse. And so when Funhouse started, I started out as the apprentice writer. I wrote eight episodes as apprentice writer-slash-assistant writer. And then for season two, I was promoted to staff writer.

Alex: Congratulations on your career trajectory so far. What are your future goals and dreams? What would you like to do in the future either at Disney or beyond?

Kate Moran: Well, I would love to continue telling stories that feature a broader range of diverse characters. I mean, my goal is basically to help expand the definition of normal because a lot of times that definition, that scope of what's considered normal is so small and our world is so broad and big. And I mean, it's beautiful. We're all different and it's beautiful. And it's wonderful to see that represented on screen and in stories because I don't feel like what is different about us should be the only thing about us. And that's one of the reasons why I wrote Fig the way I wrote Fig is because he does so many things. And the fact that he is deaf is just a small part of who he is. And so I want to continue being able to tell stories like that and hopefully I'll have my own show.

Alex: Speaking of Fig, fans can expect to see him again someday on Mickey Mouse Funhouse. Are you able to share any details about when we'll see Fig again, or what kind of stories we'll see with Fig alongside Mickey and his pals?

Kate Moran: I'm not sure what's coming up next on the schedule, but I can confirm that he does make appearances in other stories and that other writers have included him in their stories.

Alex: “The Music of the Seasons” is a great conversation starter for parents and their kids. Children will recognize that Fig communicates differently and the episode ends with Mickey and Minnie Mouse teaching viewers how to say “I love you” in ASL. Do you have any resources that you recommend for parents whose kids may want to further their learning of ASL after seeing this episode?

I try to encourage people to, if their kids are open to it, to learn as many different ways of communicating as possible, ASL is definitely one of them. And I think that the more ways you can teach children to communicate with others, it helps broaden their world. And at the same time, it helps make the world a smaller place, because it's easier for us to relate to each other, if we can talk with each other, I know that there are various online resources that are really good for learning ASL

EDITOR’S NOTE: Following our interview, Kate shared the following links as resources for helping children learn ASL. Please note that Kate Moran is not affiliated with either organization and is merely sharing these as a helpful resource.

Alex: Thank you so much for your time, Kate. Is there anything else that you want readers to know about Mickey Mouse Funhouse that we haven’t covered?

Kate Moran: I just love the world of Funhouse so much because not only do we have this beautiful creative play that happens, but the fact that so many of the stories are told from such a personal perspective as well. I think that it's just fantastic and helps really bring Mickey and friends into a new dimension. 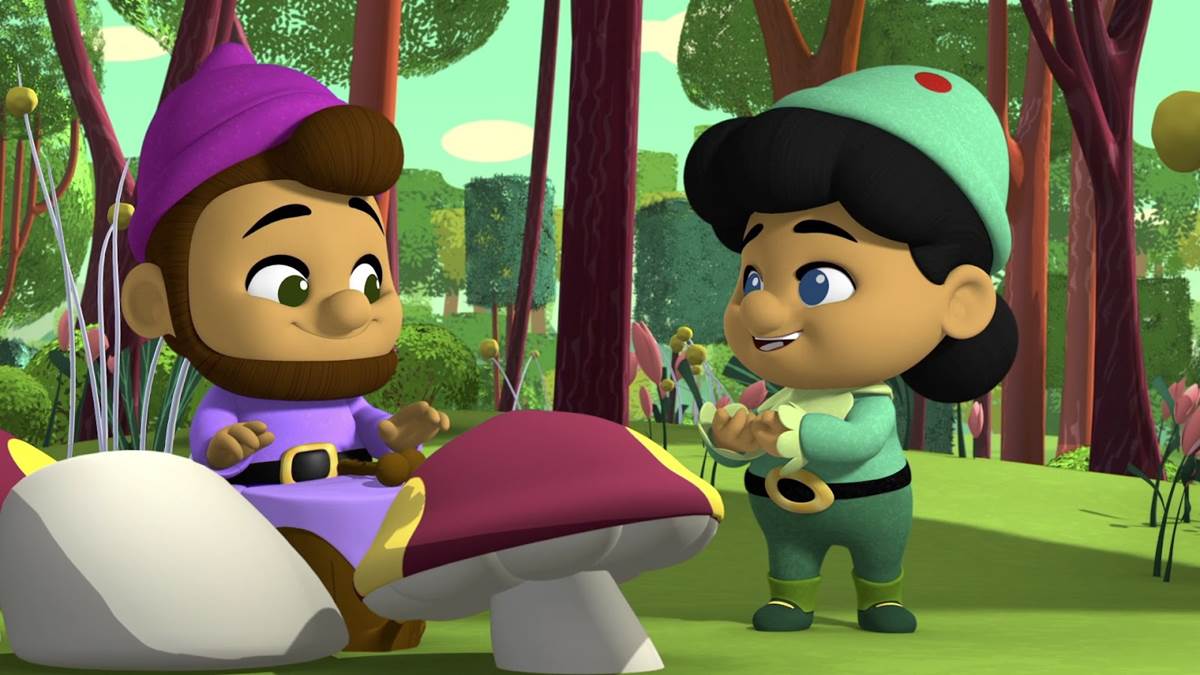 Meet Fig, his sister Olive, and the rest of their gnome friends in “The Music of the Seasons,” a brand-new episode of Mickey Mouse Funhouse premiering Friday, May 13th, at 8:30 am ET on Disney Junior. This episode will be rebroadcast throughout the month of May on both Disney Junior and Disney Channel.