It’s fun that we get to see a recap of what happened last week on an unscripted game show but alas, that’s what happens when we tie a Muppet storyline into the whole thing, so we should expect nothing less. This time, we have been reminded that Rob has inadvertently recruited the Muppets to help save the show in the hopes that it is renewed for another season. This means that at some point in this episode, Rob will finally encounter Miss Piggy, who he is trying to get for some sort of finale. Elsewhere in the world, Pepe the King Prawn has kidnapped show producer and resident golf pro, Stephen Curry. 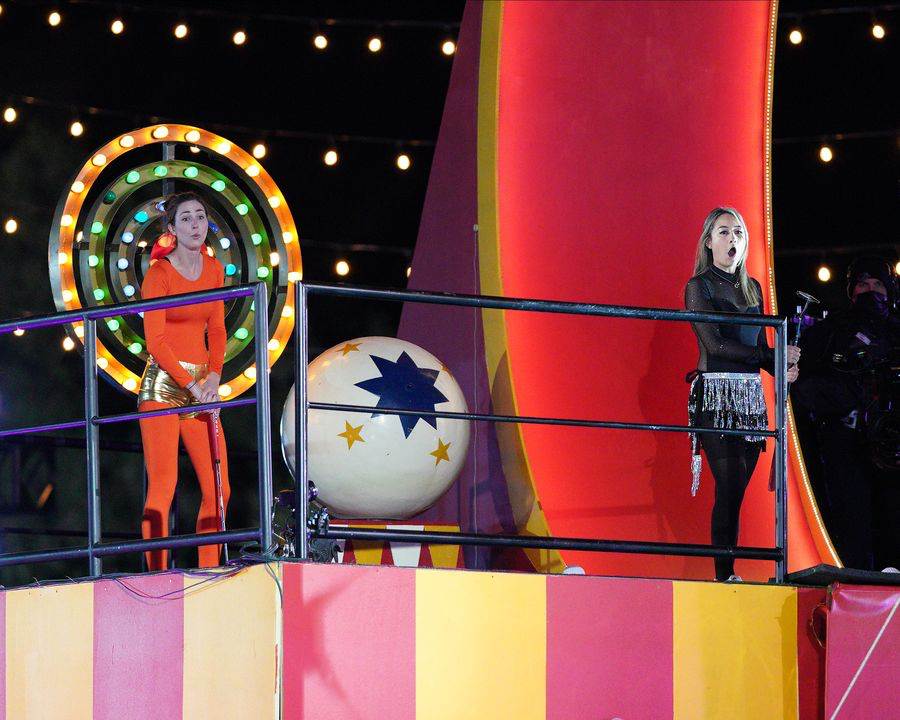 Despite the Muppet interventions, we also have a game to play, so now we see a recap of some moments we’ve already seen thus far in the season – including a well placed Willhelm scream. Joe also has to clean up something Rob said and emphasize that the athletes featured in the game are also Non-Steroidal athletes. 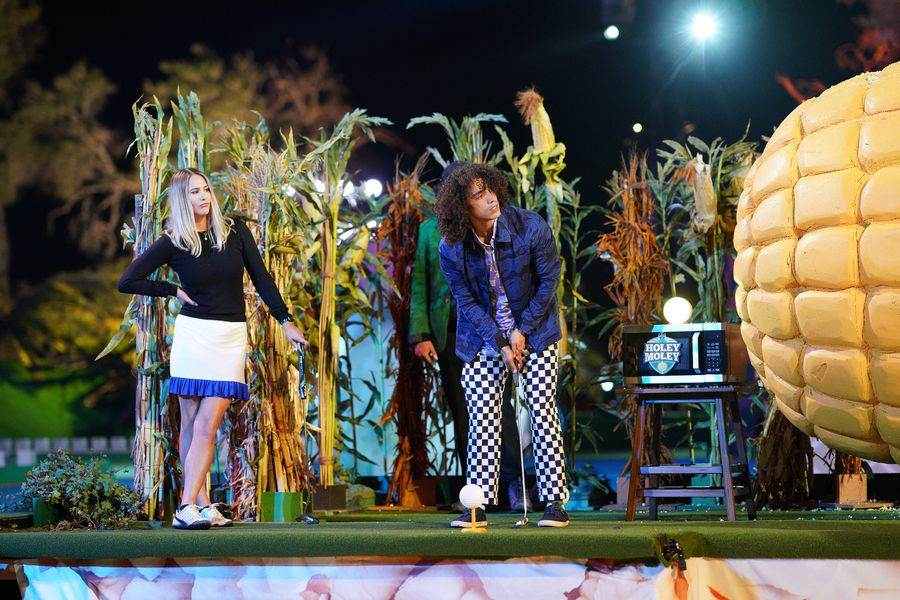 It’s on to the first hole, Corn Hole, where Matthew the Crossfit-er is taking on Pierre who is single and ready to min—mini golf. Of course the topic of working out came up in the booth, where Rob said that since getting out of bed doesn’t count, no he doesn’t work out.

As a reminder, in Corn Hole, contestants must putt down a straight path onto the green before the sprint down alongside an exploding ear of corn. They have only a brief window in which they can make it before airbag kernels deploy out of the ear of corn and knock them into a pit of foam kernels, garnering a stroke penalty. Matthew slipped on the take off of his sprint, making it only about halfway before the explosion knocked him into the pit. Pierre didn’t fare much better, leaning poorly into her run where she made it just as far before the explosion took place.

Both golfers put “a little too much pepper in the gumbo” on their putts, but on the green, Pierre hooked her ball perfectly on the ramp and secured the win. Now, according to Rob, Matt is off to go home and CrossFit so hard. 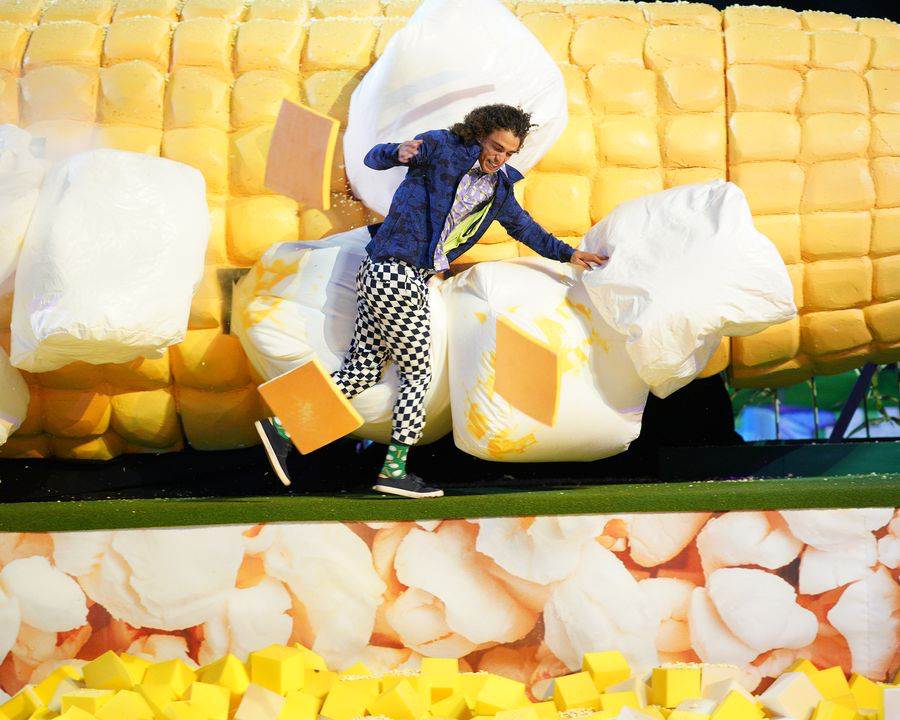 For the second part of the first round, we head to The Distractor, probably my favorite hole in the series despite the anxiety of what’s waiting on the other side of a turntable, and I’m not even playing! For the last 3 seasons and however many episodes we’re into this one, Rob Riggle has always wanted to see a bear on the other side of this wall, and Joe and the producers remind us of this with a well-edited montage. Just as the players approach the hole though, Rob needs to run off and use the restroom.

Leonard and Katie take on the hole as Joe comments that this is the first time he’s ever been left alone to commentate on the gameplay. Nerd/Megafan alert: It’s not. In earlier seasons, Rob also left the booth leaving Joe to commentate in the booth while he stalked Josh Duhamel on the course. The wall begins to rotate and reveal the distraction, and Joe simply says “oh no” before we cut to commercial. Curse you linear television! Coming back from a break, IT’S A BEAR! Okay, I’m not going to lie, I figured with the intro it would be a bear, but with the Muppets, I thought maybe it would be Fozzie the Bear. That would be quite distracting. It’s not a real bear either, but rather a guy in a suit which is nowhere near as distracting as a live bear or Muppet. Katie gets the ball in the hole in one shot, distraction free, but Leonard was not as lucky, giving Katie the win. We move over to the pun-filled hole, The Pecker, where Nick is going against Jeff to get their ball into the proper channel for a better place on the green before jumping onto the giant head of a woodpecker to retrieve a feather before getting bucked off. Jeff makes it in the channel but just misses a hole in one, and Nick does the same but hits one of the blocks and goes wildly off course. Neither player secured the feather, but both likely secured an insurance increase based on how they landed on the artificial bird, which is to say, painfully. Jeff was closer to the hole, winning the round, but Rob couldn’t stop talking about his taco pants, leading to the portion of the episode wherein he showcases his own, covered in 100 dollar bills y’all. 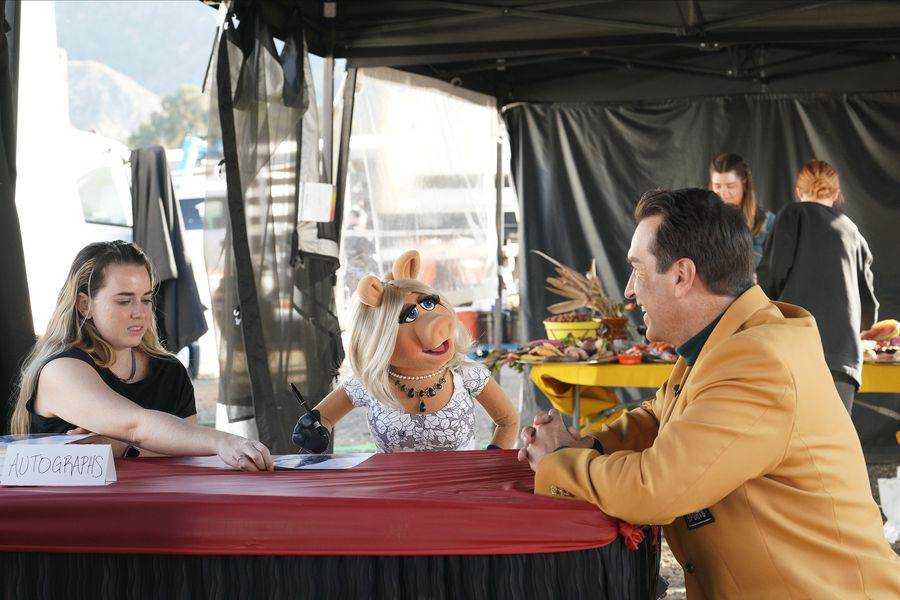 And now, it's time for “Rob Riggle Recruits the Muppets.” Riggle finds Miss Piggy on the studio lot, who after explaining that he is behind the letters and musical odes, Piggy thinks he is her stalker who needs therapy. How do you get Miss Piggy to suddenly be in your favor? Why, offer her a big finale in front of a camera of course! This moment was cut short, but we’ll find out more later. Spoiler alert: Not tonight. 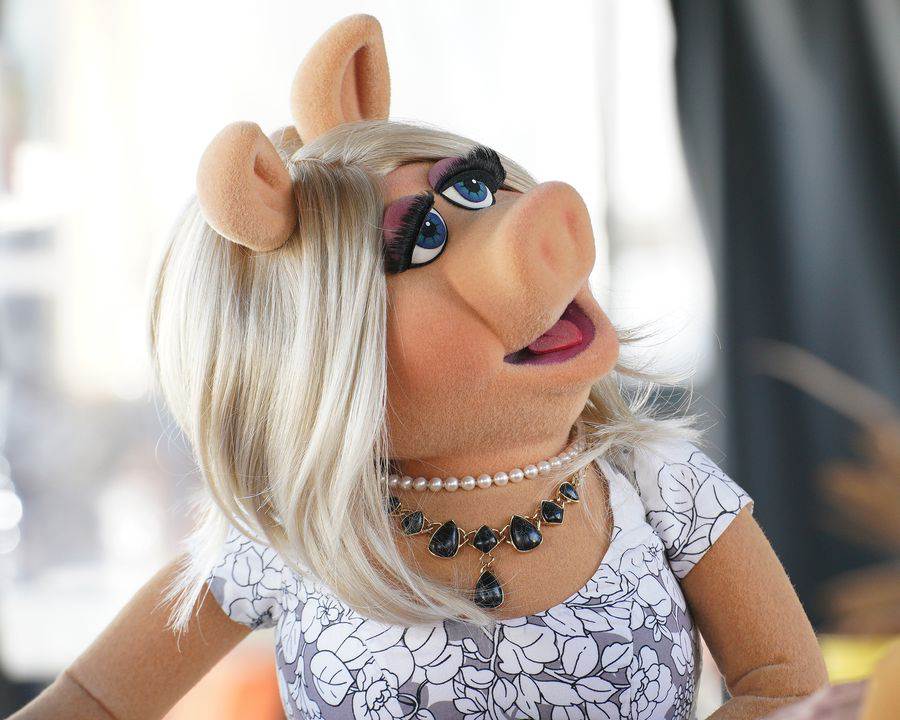 One of the new holes for the season, The TrapTeeZe, reappears tonight with Brinn competing against Gabbie. Gabbie, a golf pro, can’t hold on to the trapeze bar for very long and finds herself in the water below very quickly. Brinn, an avid runner and athlete herself makes the leap for the Rob Riggle dummy but doesn’t secure her grip and also finds herself in the water. Brinn had the better putt, and secured the win, advancing to the next round. 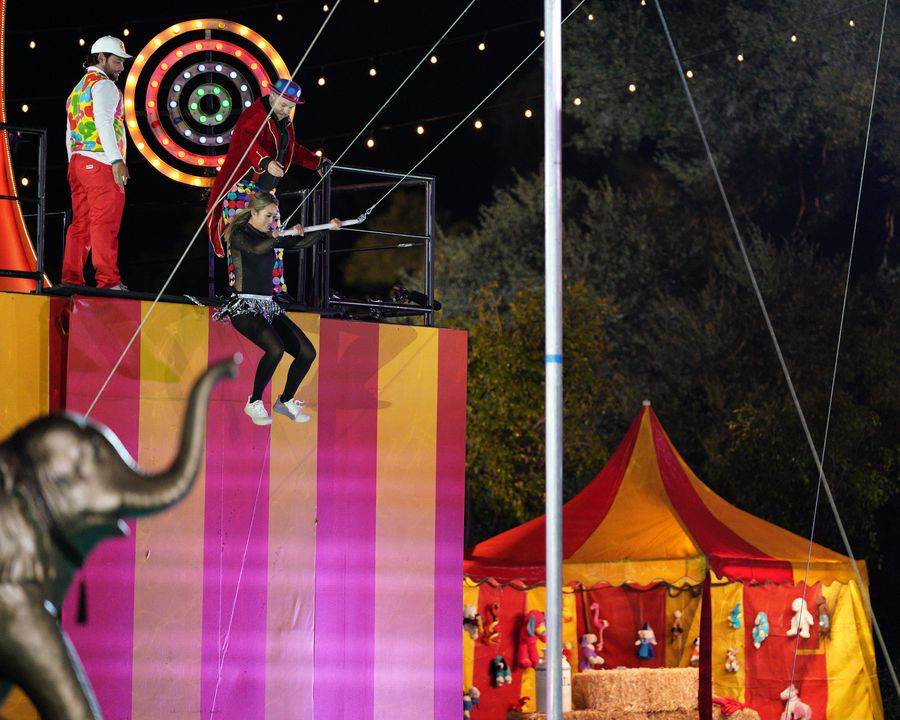 Now, Jeff is taking on Katie on PoleCano in the next round. Katie has taken a great shot up the channel and out of the Tiki, landing about three feet from the hole. However, her height has posed a different kind of challenge, reaching up to grab onto the handlebar that will slingshot her into the titular pole. Thankfully, some crew found her an apple box and she gets launched directly into the pole, spinning around and hitting the water backwards with her feet over her head.  Jeff hits his ball into the plinko and ends up in the sand, not even close to the hole on the green. His launch almost gets him into the pole by grasping his legs, but Rob says he doesn’;t have the ankle strength to save himself the stroke penalty. Somehow, this whole thing becomes a conversation about Rob’s shoes, and Katie wins easily on her second putt. 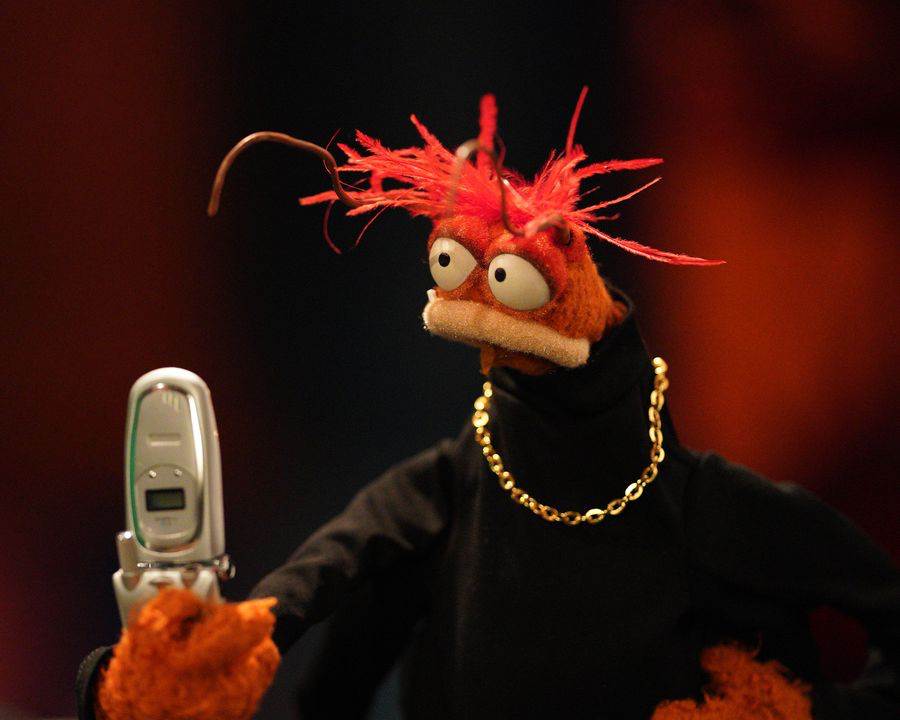 Brinn and Pierre now get to launch their balls into orbit on Full Mooney, where Pierre landed far from the hole, but did surprisingly well on the orbiting moon until almost at the end of the route and goes completely off the moon and into the water. Brinn lands closer, but has a ridge in her way. She has to make her way on the rotating moon, and does good until one long step that puts her into the water. Pierre catches the edge of the ridge on her second putt, making it in 4 with the stroke penalty. Brinn makes it over with a smooth roll and locks in the win with a great putt. For the Final Round, we see Katie and Brinn take on HoleyWood. Neither player ran down the accelerated red carpet properly, getting launched flailing into the Holey Moley Walk of Fame. However, great debate ensued considering how they landed on the stars, with judges ruling that since half their body was in the water, both players will be given the worst possible drop position, being “Riggled” and given the Rob Riggle Drop Zone. When they finally make it to the green from the absolutely abhorrent position, Brinn hits her ball into a ridge with too much forse behind the putt while Katie got it right up to the pin. Joe keeps reminding the viewers (and Rob) that they both started from the worst position on the green, having been “Riggled.” Brinn scores the putt in three, but it’s Katie that makes it in two, securing the win, the plaid jacket, the golden putter, and the chance at $250,000. Plus, she has a test at Harvard tomorrow to get to. All of those prizes were once again given out by the “real” Steph Curry.

Holey Moley: Fore-Ever! Airs on Tuesdays on ABC at 8:00PM, and is available next day on Hulu.