Earlier today, the first teaser for the 61st full-length feature from Walt Disney Animation Studios, Strange World debuted and coming in at just under 90 seconds in length, it already has piqued the interest of many. 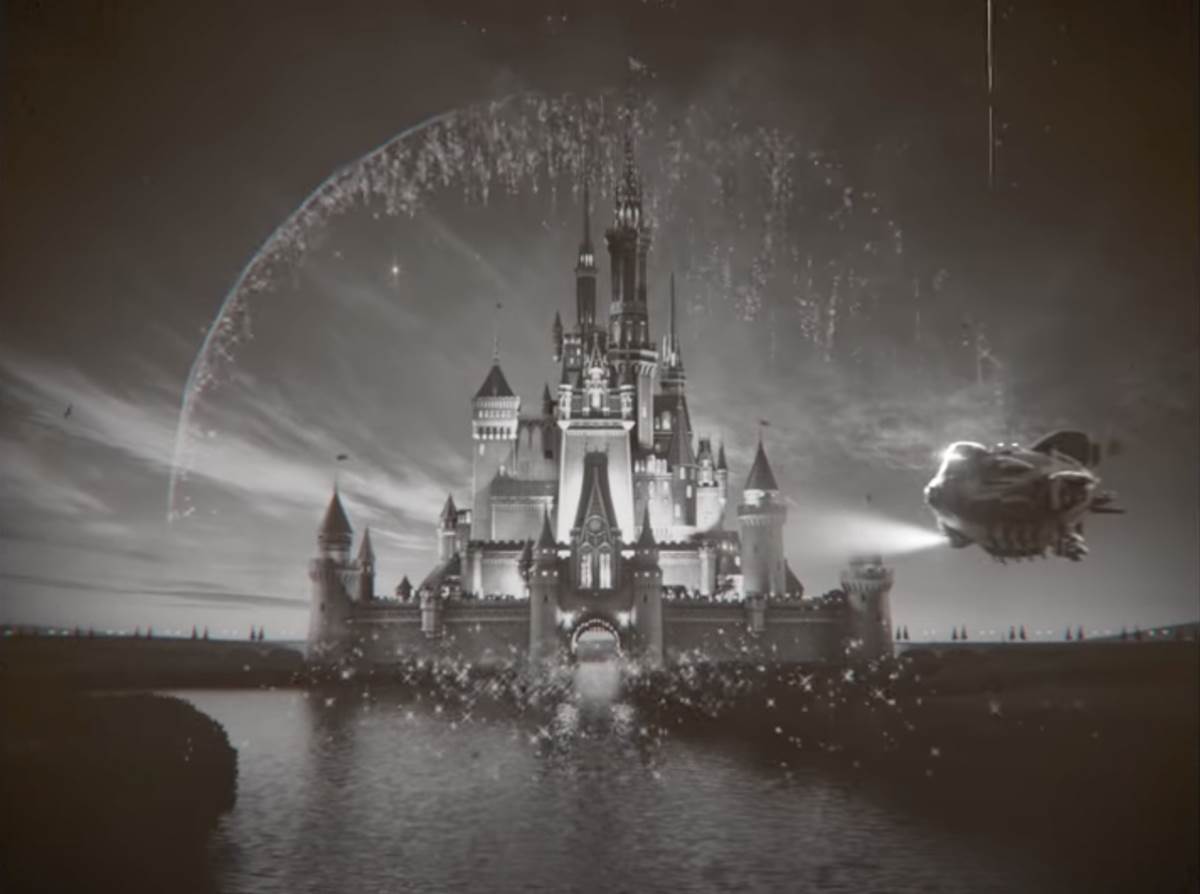 While I can’t say much about the Castle logo as seen in the trailer and whether or not it remains in the final film,  the first 20 seconds or so of this teaser is presented in the style of a 50’s Sci-Fi B-Movie. A very cool idea indeed, but it seems that it is only for the teaser and trailer, and the film itself likely will take itself more seriously while acknowledging that era as inspiration for the film. Also, it’s really… strange… that whoever edited this together decided to put the phrase “Unlike anything you’ve ever seen!” directly across a shot that is so reminiscent of the migration scene from Pixar’s Finding Dory, a primary moment that was used in that film’s marketing efforts as well. 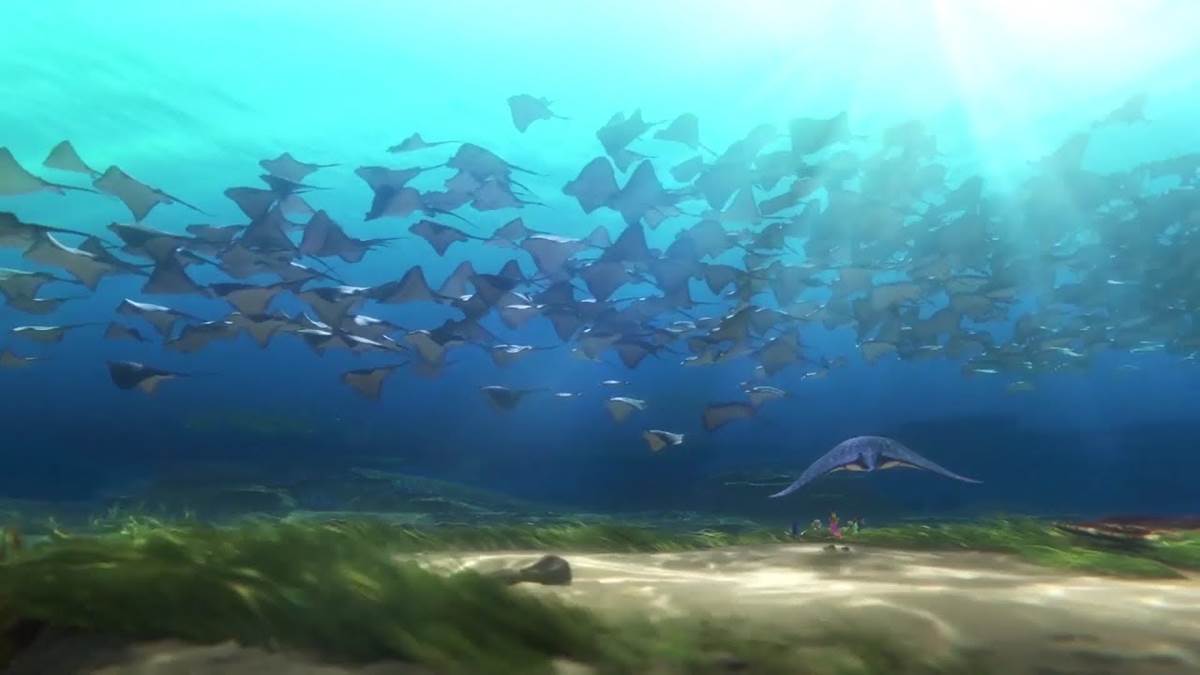 Now, given that this is only a teaser, we aren’t really treated to much of the story. From what can be gathered, we know that this troupe of humans and their canine companion is in fact in a Strange World – A title that my knowledge of the inner workings of the Walt Disney Animation Studio from the documentary Waking Sleeping Beauty suggests MUST have been chosen by the marketing department, similar to the change that “Basil of Baker Street” saw when that film became The Great Mouse Detective.

Is this a new planet, or somewhere in the world we already know, or something entirely different? Again, we don’t really know aside from a few recurring phrases suggesting that this is a newly discovered world of wonders and fantastic things, like cliff sides that can break away and walk off on their own.

We also see some Starfish-esque creatures in a moment that tells me that if this film is hugely successful, it would be very easy to Chapek-ify and synergize Pandora: The World of Avatar into a new experience at Disney’s Animal Kingdom.

There’s clearly stakes at hand as well, considering one of the characters who we don’t know yet suggests that they can’t back out just yet as they have history to make. 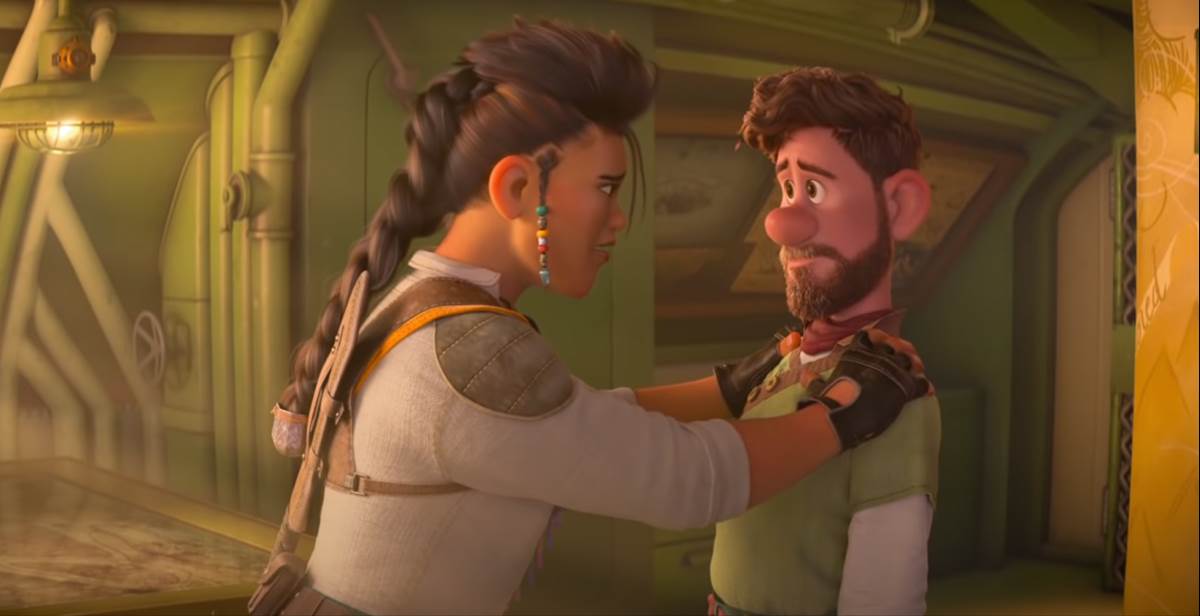 Our main character seems to be a fish out of water in the role of explorer, when he considers himself to be a farmer. This teaser immediately gives vibes that harken back to Atlantis: The Lost Empire, Treasure Planet  and similar films from the studio that usually stand out from the more traditional Disney fare and try to buck the trend of princesses and musicals. The film is directed by Don Hall, who recently helmed Raya and the Last Dragon and knows a thing or two about films that stand out from the norm. He has also previously helmed Big Hero 6, with writing credits on earlier films like Brother Bear and Meet the Robinsons. Joining him as co-director/writer, is Qui Nguyen, whom he teamed up with when he served as co-writer on Raya and the Last Dragon.

I smell a sidekick

According to director Don Hall, Strange World is a nod to pulp magazines—popular fiction from the first half of the 20th century that was printed on inexpensive wood pulp paper, though the teaser takes on the 50’s Sci-Fi feel.

By the end of the teaser we learn of the Thanksgiving release date fast approaching, but it is not specified where the film will be released, theatrically or on Disney+.

From what we do know beyond the teaser, the story focuses on the (tentatively named) character, Searcher Clade, voiced by Jake Gyllenhaal, the son of a steadfast explorer. The original action-adventure journeys deep into an uncharted and treacherous land where fantastical creatures await the legendary Clades, a family of explorers whose differences threaten to topple their latest—and by far— most crucial mission. Of course, that is all based on what we seem to know from trademarks filed by the studio for character names, as well as audition call sheets. However, in the world of animation, details like that can shift and evolve as production progresses.

Personally, Strange World seems so different that I’m excited, but with anything new comes a level of trepidation and nervousness that I’m experiencing when I watch this teaser a few times over again. Again, this is just a teaser, and we’ll know more when a full trailer drops.