The wait is over and Kamala Khan has finally made her MCU debut. The first episode of Ms. Marvel premiered on Disney+ today and it brings a fun and vibrant energy to the screen while introducing a brand new audience to this beloved Marvel hero.

The episode opens with a look at a more modern version of Kamala’s Avengers fan fiction. She has a YouTube channel where she tells the stories of the Avengers and we see a video about Captain Marvel saving them during the Battle of Earth.

This segment is loaded with cool little details, including a nod to The Inventor, a bizarre bird-themed villain Kamala takes on in her early comic book days. It also gives a nod to Superman, with the whole “it’s a bird, it’s a plane” thing before the arrival of Captain Marvel. We also learn that Scott Lang has a podcast these days and has been sharing details about his Avengers experiences. Kamala also explains that AvengerCon is coming up and she hopes to get some answers as to where Captain Marvel has been. She teases another video where she’ll explain why she thinks Thor is a gamer (she’s technically right) and before it wraps up we see that her channel isn’t doing so well, with just eight and five views on her last two videos.

She is interrupted by her mother who tells her she is going to be late for her driving test. As she comes downstairs we meet her parents and her brother and we actually get a moment that is taken right out of the comics as her father tells her brother to stop praying long enough to eat. 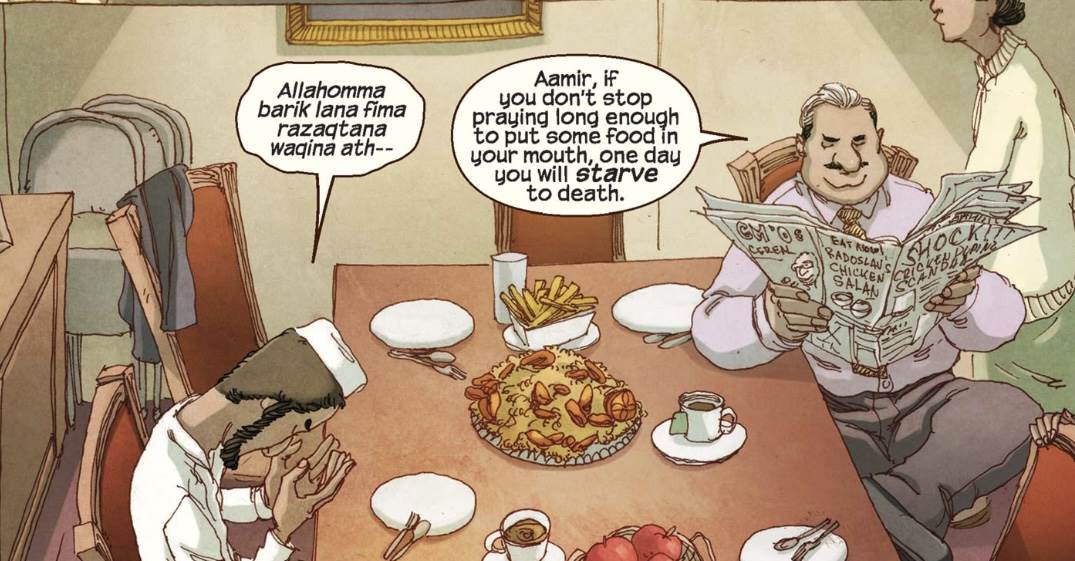 Kamala shares some humorous moments with her driving instructor before failing her test, badly. Her parents berate the instructor before driving Kamala home as she stares out the window and daydreams. Later, at school, we learn pretty quickly that Kamala is less than popular, before she bumps into her best friend, Bruno.

Bruno takes the news of her failing her driving test as a sign that they won’t be going to AvengerCon, but Kamala refuses to accept that and talks up her Captain Marvel cosplay. Nakia, Kamala’s only other friend, arrives and takes $10 from Bruno because she won a bet on Kamala failing her test. They then all bump into Zoe, the popular girl and a bit of a bully to Kamala. All of these characters are taken directly from the comics.

Kamala then meets with Mr. Wilson, her guidance counselor who freaks her out by telling her she needs to start thinking about her future. After school, Kamala meets with Bruno at the Circle Q, the store at which he works. Bruno explains his plan for Kamala to simply ask her mother if she can go to AvengerCon, which Kamala doesn’t love.

The two ride their bikes as they brainstorm ideas for her Captain Marvel cosplay and we see animated versions of all the ideas they discuss. It’s a great depiction of the playfulness and colorful energy that this show is constantly putting forth.

Back home, Kamala’s mother drops a box of old things her grandmother sent them. Kamala looks through it and finds the bangle we’ve seen in the trailers. When she asks about it though, her mother seems to get defensive and takes it from her, dropping it back in the box and calling it all junk. It appears she knows a bit more than she’s letting on.

Kamala and her mother then run errands as they prepare for her brother’s wedding. She overhears her mother and a friend talking about a girl in her community who called off her engagement to travel the world. Kamala expresses pride for this girl but is shot down by the two women. There’s a theme throughout this episode of women in her culture not having the same freedoms or expectations as men.

Back that the house, Bruno introduces Kamala’s father to some of his new inventions, which he loves. It’s clear right away that the whole family loves Bruno. He urges Kamala to ask her mother about AvengerCon as he makes his way out the door.

Kamala maker her pitch to her parents and it doesn’t go well. In the comics, it’s a party Kamala is aksing to go to, not AvengerCon, but the result is the same. This sequence also shows us that her mother is the far tougher of the two parents. Kamala again points out differences in expectations for boys and girls, using her brother as an example.

Aamir, her brother, comes to Kamala’s room to comfort her and promises to speak to their parents for her. Kamala texts Bruno to let him know her request was shot down. The texts are shown very creatively and fit perfectly with the vibe of this show. We see Bruno go up to an apartment above the store and start tinkering with inventions.

Kamala tries on her Captain Marvel costume in the mirror and starts looking for way to alter it to make it more modest. She’s interrupted by her mother who announces a plan to allow her to go to AvengerCon, provided she wears a homemade Hulk costume and her father attends with her, also dressed as the Hulk. Kamala refuses and has a bit of an outburst that offends her parents and shuts down her chance to go.

Kamal meets with Bruno on the roof and he comforts her. They share a moment and it’s clear there are some romantic feelings between them but neither one is willing to act on them. Instead, Bruno introduces his newest invention: photon gloves. Kamala excitedly put them on and they start mock fighting with her new Captain Marvel prop.

We see Kamala suffering through the typical high school experience before she returns home where she has an idea. She pitches this idea to Bruno the next day in school and we see a hilarious montage of her plan playing out. It essentially boils down to her sneaking out and taking the bus to AvengerCon with Bruno.

Before enacting her plan, she searches for one last piece of flair for her costume and she finds the bangle she saw earlier. The lights flicker as she examines it, letting us know that there is something mystical at play with this jewelry. She takes it but does not yet put it on.

Kamala sneaks out and meets up with Bruno. They make their way to AvengerCon, with each step of her plan not going exactly as Kamala laid out. Eventually though, they do make it to AvengerCon, which is being held at Camp Lehigh, the birthplace of Captain America.

The two explore the convention and we see dozens of gags and pieces of fun merchandise, some of which is actually available to order now. Kamala pauses to admire a tribute to Captain Marvel before checking in on her parents at home using Bruno’s inventions. Everything is going according to plan as they hear an announcement for the Captain Marvel cosplay contest. That is, until Kamala spots Zoe in a costume and is distraught by the thought of competing against her.

Still, she goes to change for the contest but accidentally loses the gloves. As she reconnects with Bruno, who is now dressed as Bruce Banner, we see that the contest is being hosted by none other than Agent M himself, Ryan Penagos. 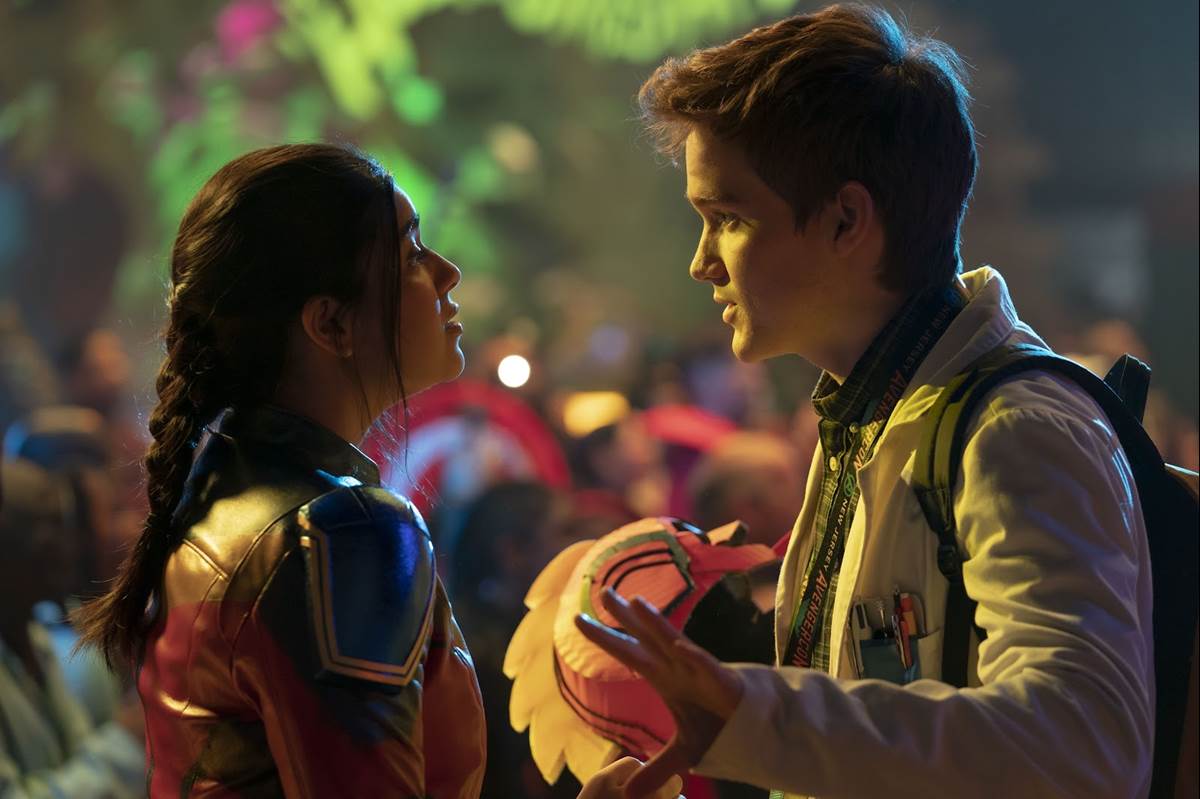 Kamala finally puts the bangle on and immediately has a cosmic reaction. She starts to glow and seemingly falls into some other realm where hundreds of shadowy figures stare at her with glowing eyes. She quickly snaps back into reality though and Bruno rushes her onto the stage for the contest.

Kamala is flustered by the flashing lights of cameras and accidentally lets out a blast of some sort of light from her hand. The crowd loves it and they cheer for her before a giant Ant-Man head falls and causes a chain reaction of chaos. Kamala saves Zoe, instinctively using her powers and she and Bruno rush out as everyone scrambles in a panic.

The pair get Kamala back home as she again accidentally uses her powers to get up to her roof. Once inside though, Kamala is immediately caught by her mother, who is of course very disappointed in her. Overwhelmed by everything she’s been through, Kamala falls onto her bed and looks at her glowing hand before cracking a smile and uttering the word “cosmic” as the episode comes to a close.

It’s not over yet though as this first episode actually includes a mid-credits scene. We see someone at the Department of Damage Control watching a video of Kamala’s incident at AvengerCon. We then see that she is speaking to Agent Cleary, the same agent who interrogated Peter Parker, MJ, Aunt May and Ned in Spider-Man: No Way Home. After seeing the video, Cleary instructs the woman to “bring her in.” It appears Kamala is about to have Damage Control on her tail.

This first episode of Ms. Marvel is just so much fun. It brings a very different energy than anything we’ve seen in the MCU to this point and is certainly a very different feel from Moon Knight. Kamala is instantly a lovable character and everyone around her is perfect. Marvel has another great hero on their hands here and we can’t wait to see where her story goes next.

You can watch Ms. Marvel on Disney+ now.