Disney Channel’s new sitcom about supervillains, The Villains of Valley View, premiered with two back-to-back episodes on June 3rd. In “Finding Another Dimension” and “Trust No One,” we meet the family and their kindhearted neighbor Hartley. Here’s a recap of the first two episodes. 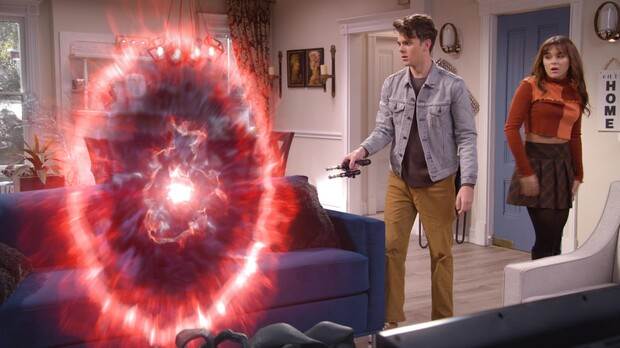 “The Maddens” just moved into Valley View, Texas. Parents Vic and Eva talk about how they are doing what ordinary families do as the family gathers together for movie night. But their couch time is literally upended when the eldest son Jake lifts up the couch to find the lost remote. The family is actually supervillains in disguise. The doorbell rings and their landlady Celia enters with her granddaughter Hartley, who recognizes the eldest daughter Amy but can’t place where she knows her from. When Hartley asks what brought the family to Valley View, a flashback starts.

Two weeks ago in the city of Centropolis, we see the family in their true forms. Vic is Kraniac, Eva is Surge, Jake is Chaos, Amy is Havoc, and the youngest son Colby is waiting for his powers to manifest. When Amy announces that she was passed over for a promotion by the leader of the supervillains Onyx, she makes a statement that they should retire.

Back in the present, Amy and Jake are at school where Amy is already causing chaos by using her sonic powers to make the bell ring early. Jake reminds Amy that she puts the family in danger every time she uses her powers, suggesting that she read a book he just finished called “How to Be a Better Person.” He convinces Amy to try to make a friend just as Hartley comes around the corner, with Jake making the introduction and Hartley agreeing to come hang out after school.

While Amy and Jake were at school, Vic created a new secret lab in the basement and turned the microwave into a device that can zap someone into another dimension. Colby’s superpowers have manifested and he has the ability to shapeshift into anything. Vic, Eva, and Colby decide to go out and scare people with Colby’s new powers.

Hartley comes over after her meeting with the cheerful Sunshine Club, making Amy an honorary member by giving her a sunshine hat just like hers. Hartley grabs the remote and turns on her favorite show, “Catching Up with the Supers,” a superhero reality show. Amy is annoyed as Hartley gushes over her archnemesis Starling, who is discussing how she defeated Havoc (Amy’s supervillain name). Jake pulls Amy into the kitchen to try to get her to calm down, but when she sees Vic’s device, she grabs it and heads back to the living room. Jake tries to take it from Amy and during their struggle, he accidentally pushes the button, zapping Hartley away. Vic and Eva come in with a dog, announcing that they got a pet, but it’s really Colby in disguise. Jake and Amy tell Vic what happened and he goes to the lair to develop a device that can bring her back.

When Celia shows up looking for Hartley, Eva has Colby shapeshift into her so she doesn’t call the cops. However, when Celia reveals that Hartley has a dentist appointment, Eva uses her powers to cause an electrical surge, telling Celia she needs to fix the flickering lights in the house.

The new device Vic makes looks just like the other one and he gets them confused. Amy uses the wrong one and ends up trapped in the other dimension with Hartley. The dimension is starting to break apart and rocks are flying through the air. When a big boulder heads towards them, Amy uses her powers to break it apart and Hartley realizes where she knows Amy from. Her secret is out, Hartley knows that Amy is really Havoc in disguise. Amy reveals that her family is in hiding because of her, saying that she went to talk to Onyx and got so mad that she used her powers against him. He vowed to destroy the whole family, so they went into hiding and moved to Valley View. Jake arrives just in time with the other device to bring them back.

Celia sees two Hartleys for a moment when they return, but Eva causes another surge and blames it on a trick of the lights while Colby transforms back into himself. Hartley keeps the family’s secret, which surprised Amy. That night, Amy and Hartley hang out on the front porch. Hartley offers to help Amy be good if she allows Amy to help her be a little bit bad. 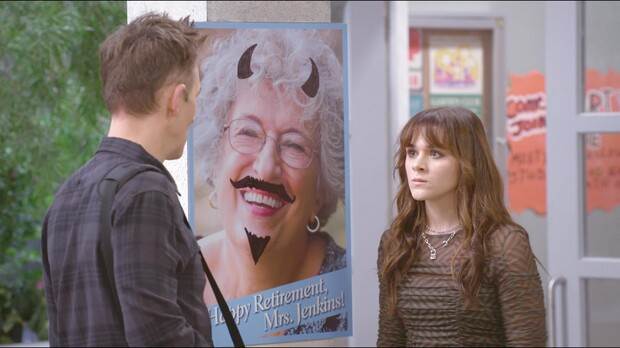 The next day, Vic announces that the family should move again since Hartley knows their secret, suggesting they go to Sheboygan, WI. Jake is upset because he likes it in Valley View and he is on his way to becoming student of the month. When Hartley stops by the house, she recognizes how tense the family is around her. When she leaves, the family makes a plan to find something to blackmail Hartley with to ensure that she keeps their secret. Amy says she will do it, but the family doesn’t trust her with a task this big.

Vic gets a job as a substitute science teacher, secretly using his time to try and find dirt on Hartley and thwart Amy from doing it, too. None of Amy’s plans are successful, which include trying to make it seem like Hartley misused donations to the Sunshine Club or that she vandalized a school poster. When Vic ruins Jake’s dreams of being student of the month by giving him an F, he joins with Amy to help her find dirt on Hartley.

Vic has flipped Jake back over to his side in exchange for an A on his science homework. Jake uses his super strength to break the head off the statue of the school mascot and hides it in Hartley’s locker. When Hartley comes around the corner, a police officer arrives and announces that he will arrest whoever did it. Jake freaks out and tries to stop the officer from opening Hartley’s locker, but when he does, he’s surprised to see that the head is gone. It turns out that Hartley knew they were trying to frame her as blackmail and decided to teach them a lesson. She promises that they can trust her.

Hartley comes with Amy, Jake, and Vic when they arrive home. Eva notices a sweater hanging out of Hartley’s backpack just like the one Colby transformed into. It turns out that Hartley borrowed it and a hole formed, so she’s been avoiding showing her aunt. Eva offers to help get her off the hook in exchange for keeping the family’s secret. Colby pretends to be the sweater one last time, making Celia believe she caused the hole by pulling a thread. When Eva takes her to the kitchen to get thread, they swap Colby with the actual sweater.

The Villains of Valley View will return on Friday, June 10th with the third episode, titled “The Villain Experience.” Here’s the official episode description from Disney Channel.

Feeling bad that Colby has never had a chance to be a villain like they did, Amy and Jake set out to create a villain experience for him.