A lot of work goes into creating an animated series, regardless of who the intended audience is. At Annecy Festival, Disney Junior hosted a Studio Focus panel moderated by Alyssa Sapire, Senior Vice President of Original Programming for Disney Junior. The panel focused on the recently launched series Alice’s Wonderland Bakery, the short-form musical series Rise Up, Sing Out, and the upcoming series Firebuds. 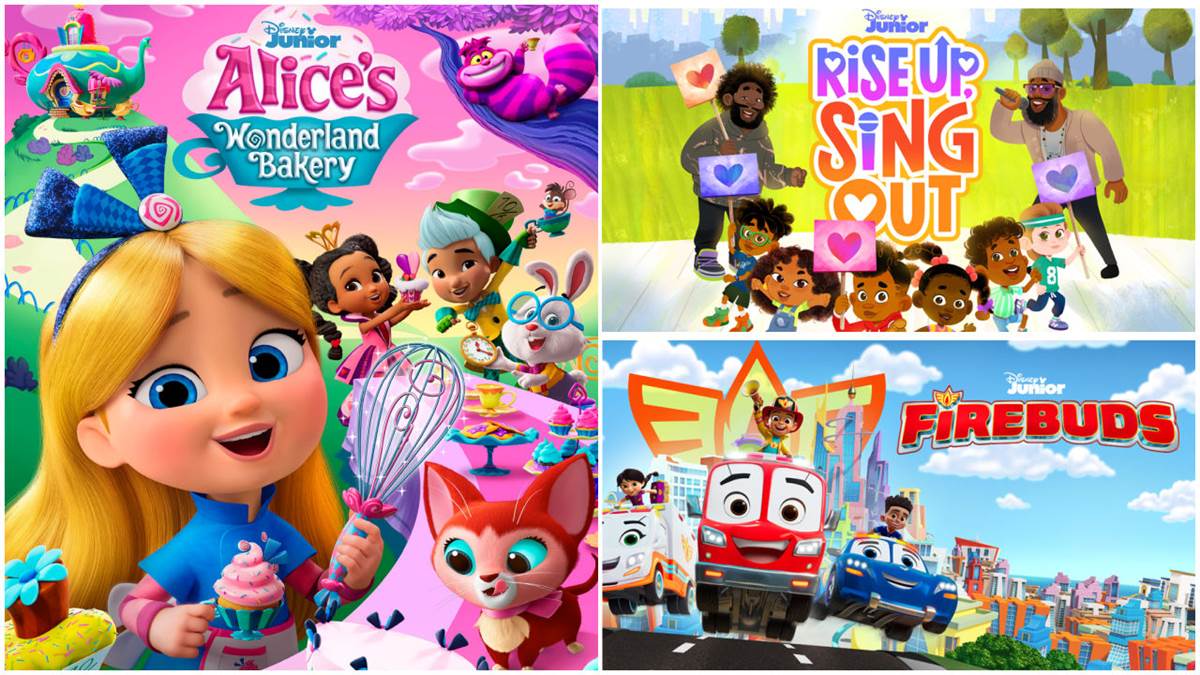 Inspired by Disney’s 1951 animated classic Alice in Wonderland, Alyssa Sapire had the idea to make a preschool series featuring characters from Wonderland. Executive Producer Chelsea Beyl took that idea and married it with her childhood memories of baking with her family, since Alice was always eating things in Wonderland that had magical properties. The series was contemporized by making the characters descendants of the cast from the original film. This also allowed for more diversity, with Hattie’s family having Japanese heritage and Princess Rosa’s family being Cuban.

Part of Chelsea’s inspiration for the series were handwritten recipe cards passed down to her from her grandmother. She felt the responsibility of working in the sandbox of a beloved property, celebrating it by incorporating Mary Blair’s style into the designs and even paying homage to the film by setting up camera frames in the same way. Behind the scenes, the show has a dedicated team of five writers, bringing in freelance writers to help out, particularly when a new voice is needed for a culturally specific moment. She shared that Disney Junior also has a team of cultural consultants they can turn to as needed.

Rise Up, Sing Out

When Kim Keith Berglund, Vice President of Development for Disney Junior, approached Latoya Raveneau about working on a project with The Roots designed to target racism, she instantly knew how difficult it would be to lighten up that subject. But the executive producer of Rise Up, Sing Out powered through, drawing on inspiration from a childhood favorite, Schoolhouse Rock. Latoya began creating characters and writing stories, going overboard with background information to give the writers lots of material to work with. It was tough to deliver the shorts on a fast turnaround, but it was well worth the effort when Latoya began to see almost immediate feedback from parents posting their kids on Twitter and TikTok singing along to the shorts.

Of personal importance to Latoya Raveneau is the short titled “Super Bonnet,” based on her own experience as a Black child in a predominantly white community. She recalled being the only Black girl at a sleepover and, since none of the other girls slept with a bonnet, she decided not to pull hers out. In the short, she flips the script with a white girl at a sleepover where all the other girls sleep with bonnets and teach her about how cool they are. Latoya shared that her goal was to normalize the experiences that made her feel different as a kid.

Series creator Craig Gerber developed Sofia the First as a show he could enjoy with his eldest son. Likewise, Firebuds was developed with his youngest son in mind, who loves firetrucks so much that he used to carry a toy firetruck everywhere like one would with a favorite plush. Premiering this fall, the series is set in a world where humans and vehicles live together in shared spaces designed for all. Garage doors open into living rooms, all restaurants are drive-thrus, and everyone helps each other. The main message of the series is about volunteering and thinking of the needs of others.

In addition to showing a few clips from the upcoming series, Craig gave an overview of the characters in the show. Human child Bo and his best friend Flash, a fire engine, are learning to be first responders alongside their friends, Violet and her ambulance Axl, and Jayden and his police car Piston. Diversity includes Bo’s multicultural heritage (half Philipino and half Jewish), a character named Jazzy with spina bifida, a firetruck who chose a different profession than the one they were born to be, and Violet’s adopted mothers, a same-sex couple (likewise, Violet’s friend Axl has two dads). The diversity depicted on screen is also reflected in the show’s crew, with many team members of Philipino descent and the inclusion of phrases in Tagalog. Craig also announced that Lou Diamond Phillips and Yvette Nicole Brown have joined the voice cast as parents of some of the lead characters.