Last week, the second episode of Ms. Marvel on Disney+ concluded with Kamala seemingly just barely escaping trouble. However, she also stepped into a much bigger mystery when she met Kamran’s mother after they rescued her from the Department of Damage Control. Now, it’s time for Kamala to get some answers. 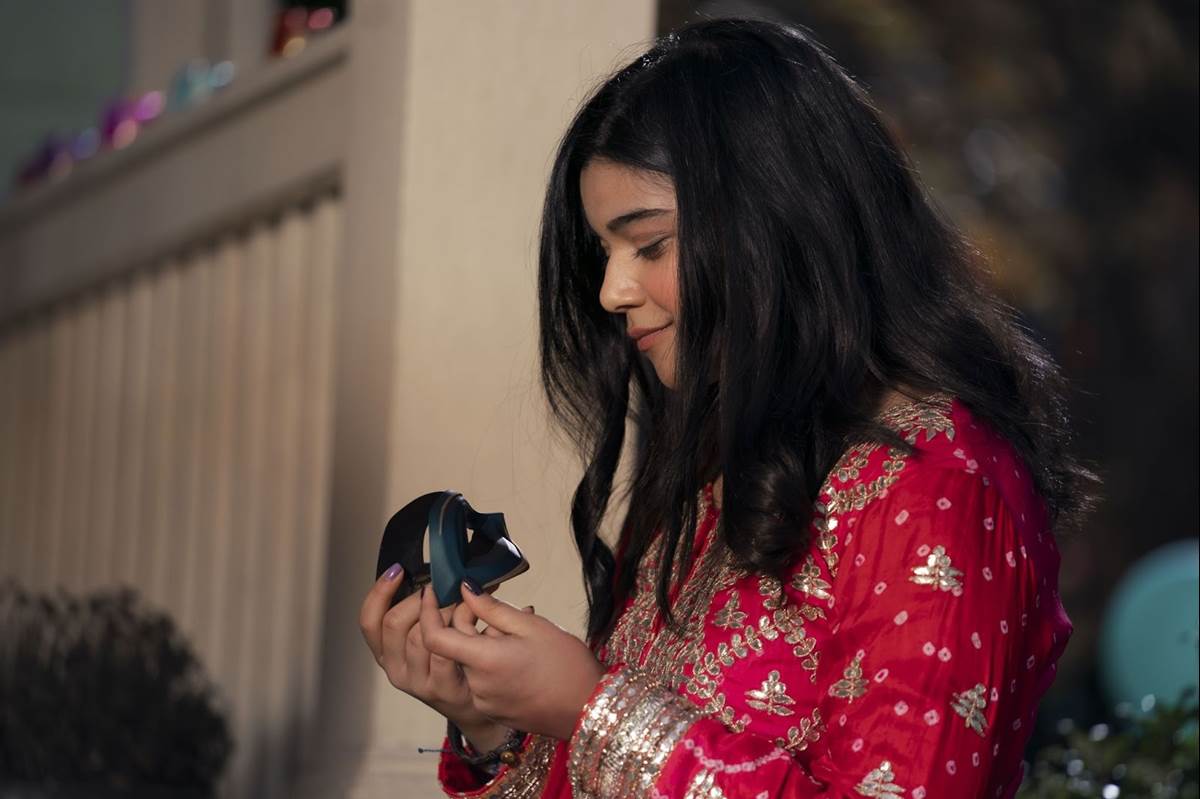 The third episode opens with a scene set in British-occupied India in 1942. We see people digging and searching for something in some kind of temple until the mystery woman from last week finds Kamala’s bangle attached to a blue severed arm. A woman enters and explains that they need two of them. Interestingly, a shot from above reveals that the floor of this temple bares the insignia of the Ten Rings, the organization led by Shang-Chi’s father, Wenwu.

The woman, who is later revealed to be Kamala’s great grandmother Aisha, takes the bangle. She calls the mystery woman Najma and separates from the rest of the group, but not before revealing their hope that this bangle can possibly get them home.

We then see that Najma was telling this story to Kamala in their home in present day. We see that the others, Fariha, Saleem and eventually Aadam, are still with Najma. She explains to Kamala that her great grandmother and the rest of the group are from another dimension and they are trying to find their way home. Kamala questions how they look the way they do for being a hundred years old, seemingly hinting at some kind of connect to the Eternals. Aadam explains that Kamran is actually only 17, which relieves Kamala.

Najma and Kamala head to another room to speak alone. Najma explains that when Kamala put on the bangle, they sense the presence of Noor, which means light. After Kamala takes a moment to try out another superhero name, Najma explains that she can use the Noor within her to help them get home.

Kamala asks what this group is and Najma explains that in their dimension, they are known as the Clandestines. Clan Destine is a group from Marvel Comics, though they are very different from the one we see here. However, she goes on to explain that they are also known as Djinn here, which immediately alarms Kamala. In the comics, Djinn are an ancient race that has been mostly wiped out. They also appeared blue, which explains that blue severed arm.

Kamala rushes into Bruno’s apartment, and immediately begins pouring out information. She tells him everything she’s learned and explains that she needs his help to help them get home. She asks him what he knows about interdimensional travel, which reminds him of a paper he read by Dr. Selvig, the very same doctor we know from some of the Thor films. Before Kamala leaves, Bruno shows her that her videos as Night Light are trending.

Damage Control arrives at Kamala’s mosque looking for answers on Night Light. They threaten to search the mosque but are stopped by Nakia who has now been elected to the board. She uses some Law & Order knowledge to stop them from illegally searching the building and they leave.

At home, Kamala studies her trending videos before Nakia comes in and faceplants on her bed. Frustrated, Nakia explains to Kamala that Night Light is causing nothing but trouble for them and tells her about the experience with Damage Control. She seemingly cut Kamala off right before she was about to tell her friend about her new super powers. Now knowing Nakia’s feelings about Night Light, she decides not to tell her at all. Nakia changes the subject and tells Kamala that she won her election.

Kamala’s family hosts a mehndi, a pre-wedding celebration ahead of Aamir’s wedding. Rumors swirl about the FBI searching for Night Light, which Sheikh Abdullah sets straight. Kamala sees an opportunity to get some information and asks what Damage Control knew. Abdullah just explains that they didn’t seem happy and the group begins to talk about the trouble Night Light is causing. Kamala’s mother explains that Kamala left a box for her, she picks it up and heads outside.

Kamala, holding the box, is interrupted by Sheikh Abdullah. She asks him how he feels about Night Light, expressing that she thought it would be cool to have a new superhero fighting for them. She asks how Night Light can prove that she’s good and Abdullah delivers the line, “good is not a thing you are, Kamala, it is a thing you do.” This is a line taken directly from the comics. After he leaves, Kamala opens the box to find a new mask. 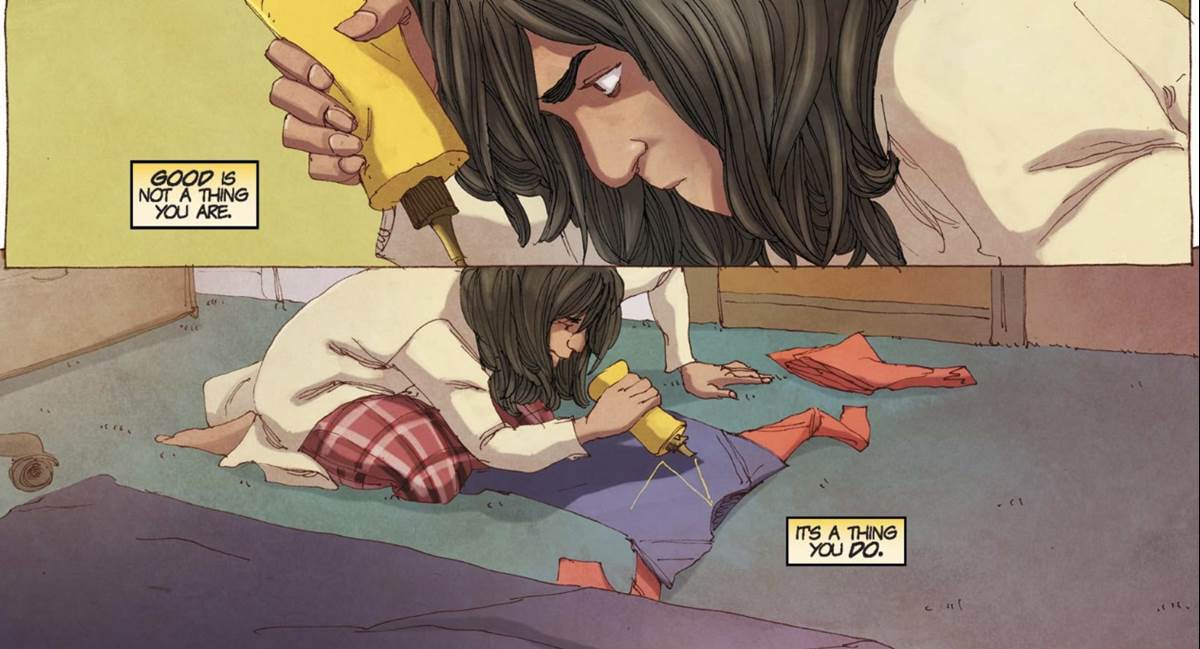 At the Circle Q, Kamala’s father enters while Bruno is working. He sees that Bruno is researching the Djinn and offers to help him. Bruno resists but Yusuf insists and he reads a description of the Djinn, essentially telling the story of the group we met earlier.

Later, Bruno explains to Kamala that he has found a way to help the group but that it is potentially very dangerous. Kamala takes this news as promising because there is a chance she can help. Bruno warns her of the dangers but Kamala is clearly very excited. Bruno interrupts by telling her he got into Cal Tech. Kamala is taken aback for a moment and he explains that he needs to go but he needs to make sure she’s safe first and he doesn’t see a safe way to help them right now.

Back home, Kamala shares a moment with her mother about feeling like she’s up again the world. She explains that this is how she felt when they first came to America and she knew no one, until she found her family and friends. She explains to Kamala that whatever she’s facing, she’s not alone. In her room, Kamala texts Kamran that she wants to help them but that she needs more time to figure it out and Kamran understands.

At her brother’s wedding, Kamala overhears her father delivering a similar message to Aamir to the one her mother gave her. In their home, Kamran finds Najma going through his phone and reading the texts from Kamala. She reveals that she knew using the bangle would be dangerous and that she’s going to force Kamala to help them anyway.

We get to see a lot of the wedding celebration before it is interrupted when Kamran comes in to warn Kamala that his family is coming. They see them come in one of the doors and Kamala pulls the fire alarm to cause a distraction. Everyone makes their way out of the building as Kamala heads the opposite direction with Najma and the group following. They eventually corner her in the kitchen and Kamala tries to talk with them but Najma throws the first punch. Kamala blocks it with hard light and the fight begins.

Outside, one of the aunties tries to tell everyone Kamala pulled the fire alarm, but they don’t believe her. Inside, Kamala hides as Najma tries to convince her to come out. Eventually, they find her and the fight spills out to where the reception was being held. Bruno rushes into the room and tries to save Kamala but is instantly hurt. Kamala finally gets enough control of her powers to land a few punches.

Kamran arrives just in time to join the fight and save Bruno. Eventually, Kamala is cornered again and Najma grabs the bangle, still on Kamala’s wrist. They’re interrupted though by a vision of a train coming right at them. The fight is then stopped when Damage Control enters and blasts the Djinn before arresting them. Kamala and Bruno manage to sneak away and find Nakia behind the building. Nakia sees Kamala use her powers and is frustrated by Kamala not telling her the truth.

Kamala returns home to a dozen questions from her parents but she tells them she can’t give them any answers, once again protecting her secret identity. In her room, Kamala gets a call from her grandmother who tells her she also saw the train and that Kamala needs to come to Karachi. She hangs up without giving Kamala any more information and the episode comes to a close. Does Kamala’s grandmother have the second bangle?

This episode certainly turns a corner for the series and gets into more of what we’re accustomed to seeing form the MCU. For example, the apparent villains of the series were finally introduced in the form of these Djinn. However, it doesn’t lose the charm and playful energy of the previous two episodes, which is great.