The stars, creators and the subjects of the upcoming Disney+ original film Rise got together for a virtual press conference this week to discuss their experiences with the film. The panel for this virtual press conference included writer Arash Amel, director Akin Omotoso, actors Uche and Ral Agada, Yetide Badaki and Dayo Okeniyi as well as the family that inspired the film: the Antetokounmpos – Giannis, Thanasis, Alex, Kostas and their mother Veronica.

Giannis, a two-time NBA MVP, opened up the junket by talking about why he wanted his family’s story to be told in this way.

“I think our story is very inspiring,” Giannis said. “A lot of people are going to learn things about us that they never heard before and we really enjoyed the process.”

Amel was asked about why he wanted to tell this story and what made it such a great story to be turned into a film.

“When I first heard the story, it was very clear that we have an incredibly modern tale of triumph over adversity and what made it modern is that it’s a universal story, Amel said. “It’s a universal story of family, it’s a story of faith and, at the core of it, it’s a story about a very modern world where immigration and sort of cultural identity is sort of at the very root of it.”

Omotoso recalled his first time hearing the story and how he knew right away that this story needed to be told on a large scale.

“Anyone who knows me knows I’m a basketball fanatic. I love the NBA, I’m very fascinated especially with African players in the NBA,” the director said. “Every year I’ll look at the draft and I’ll pick out who the African players are who got drafted. And when Giannis was drafted I remember reading about the story and I thought ‘if ever I was to make a film about basketball and life, it will be this gentleman’s story.’”

The cast was of course asked about their first reactions to hearing about this film as well. Okeniyi had a humorous take on his experience with the casting.

“When the email actually finally came to get the chance to audition for the project and go up for it, it came in, I was already prepared to call my agent and say ‘I can’t play Giannis, you know, he’s eight foot whatever and built like a Greek god, I can’t do it,’ and they were like ‘no, no, they are not even remotely considering you for him, they’re interested in whether you could play his father.’ And I said ‘okay, I guess I’m in that part of my career now.”

Badaki, who played the mother of the family, shared what spoke to her about this story and drew her in to wanting a role in the film.

“The thing for me that resonated immediately was the idea of the ability of the dream, to shine a light in really dark times,” Badaki said. “This was right in the middle of the pandemic. It had been a while since I had been on a set. I wasn’t sure if I could get on a set again. And the thing about that time was that everything had to be incredibly intentional. You literally, not even hyperbole, literally when you walk out of your door you’re making a decision of whether it’s worth your life. And I remember reading this script and it was one of those where the agency sent it and, you always do that quick, read a couple of pages and when we have time we’ll get to the rest of it. And I couldn’t put it down.”

Uche and Ral, brothers in real life who play two of the four Antetokounmpo brothers in the film, also shared their unique casting experiences.

“I was just laying in bed one day and I was scrolling on Instagram and I see a screenshot of a tweet that Giannis put out saying that Disney is making a movie about his life and his family’s life and they’re looking for someone to play him and his brothers,” Uche said. “So I just clicked on the link and just sent a video talking about myself and I sent in a tape and a few months later, I got a callback. And for me, I was never an actor prior to this, so this was very weird to me.”

It may have been weird for Uche, but the experience was even weirder for Ral, who hadn’t even auditioned for the film to this point.

“My little brother, Uche, calls me up one day. I mean, at this point I already know he’s in the movie and everybody’s just so happy that he’s in it, I’m so proud of him,” Ral said. “So when he calls me up saying ‘hey, you want to try out for the older brother?’ I’m like ‘what? That doesn’t make any sense.’ I just didn’t think that’s how things work, like, cast a brother. Anyway, it’s insane. So I’m like, ‘of course, yeah, I’ll try out, why not.’ So I sent in a tape and honestly I felt like that tape was awful. I tried really hard but I was like, I’m just going to do my best and send it in. And they decided they liked it.” 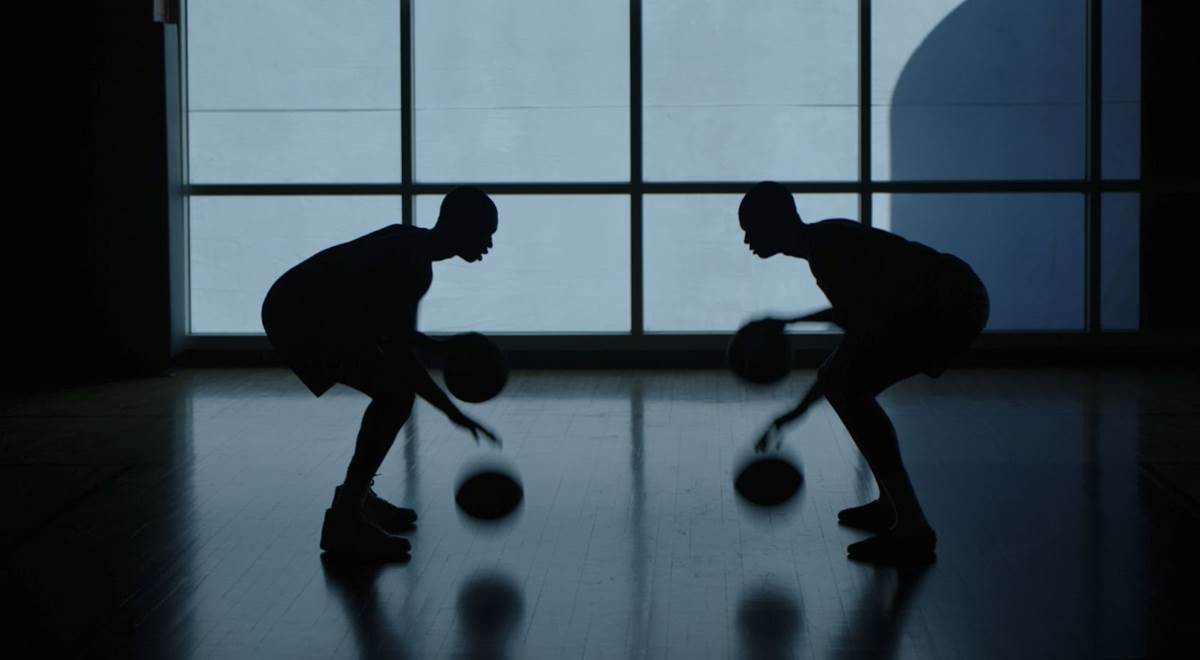 Giannis touched on some of the moments of the film that impacted him as he watched the retelling of his life story.

“Obviously, going to watch the movie, you were very excited but at the same time, you knew you were going to get emotional,” Giannis said. “You know your history, you know your journey but once you see it on th screen, it’s a whole different case.”

Kostas recalled a specific moment in the movie which he can actually remember from his own childhood and what it was like for him to watch that on a screen.

“There’s a scene in the movie where we’re outside and we’re basically selling stuff and the police show up eventually and we had to pack all the stuff and run and you see Thanasis grab Alex, like he picks him up and they run and my mom grabs me or something like that,” Kostas said. “I remember that happening a couple of times, like we had to just dash real quick out of somewhere and it touched me because it just shows we would do anything for each other.”

It was the bigger picture that impacted Alex, as opposed to just one specific scene.

Rise is obviously a movie about and NBA star, so basketball plays a huge role in the story. However, the film focuses on a much more important and relatable story than just the rise of an NBA star.

“For me, the movie is a story of family first and a sports movie second,” Amel said. “And actually, part of the challenge was how to maintain that family story and not allow the sports aspect to overwhelm it.” 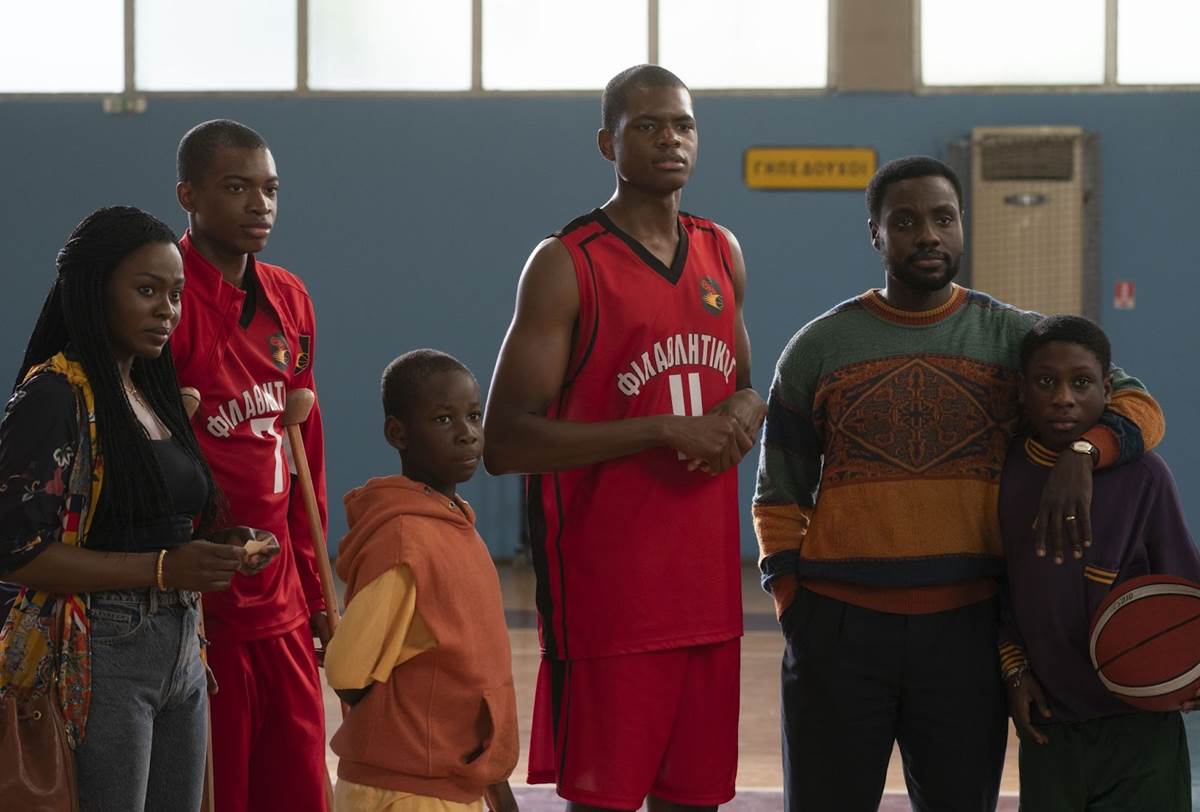 The family has a saying they live by: if one of us makes it, we all make it. Thanasis explained what that phrase means to him.

“To me it means unity. It means support. It means like, I feel like I have an army behind me when I have my family with me. It’s hard to explain because it’s engrained in my DNA. I’ve never felt any other way. I’ve never felt alone in my life,” Thanasis said. “It’s a wonderful feeling and it means a lot now, to this aspect, I think if I could explain in a simple way it would be, guys, just support each other, support not only your family, just the people you love and who you want to see move forward. And I think like the way I am today and where anyone of us is at today, I don’t think we would be anywhere remotely close if we weren’t together.”

Finally, it was mentioned a few times throughout this press conference that the working title for this film was “Greek Freak,” Giannis’ nickname in the NBA. Giannis took a second to explain why the title was eventually changed to Rise.

He went on to credit Kostas for coming up with the idea of “Rise” first and explained what they wanted that to mean.

“We started form nothing and together we rise as a family and we’re going to keep on rising together,” Giannis said.

Rise will premiere on Disney+ on Friday, June 24th.