There’s something about podcasts being used in a narrative format on television that just doesn’t translate. In theory, it should be an easy device. We’ve had years of sitcoms and dramas using radio shows as the basis for their storytelling. Yet, the podcast format portrayed on screen has always felt insincere. HBO Max’s And Just Like That… was often mocked during its season one run for its poor understanding of how podcasts sound. Or operate. Or exist. 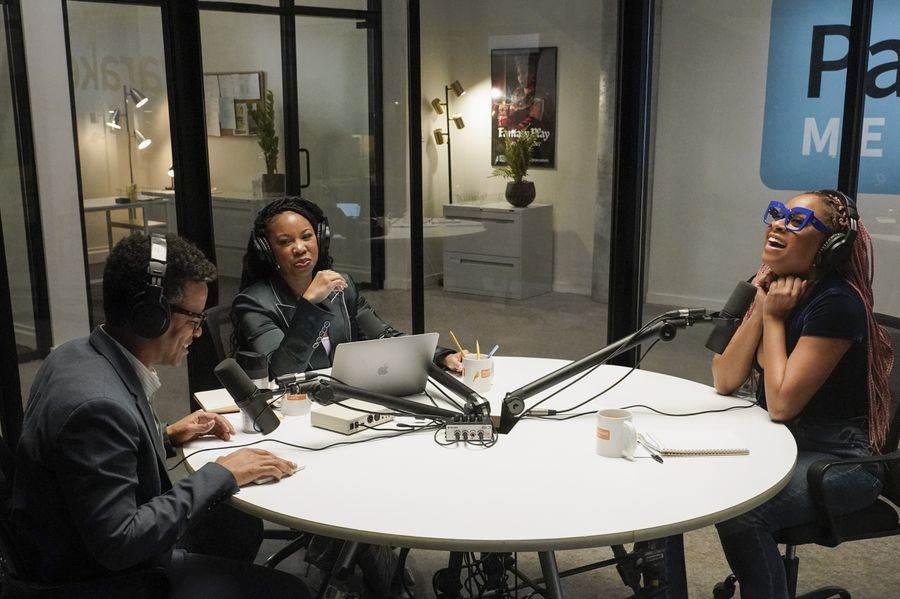 Unfortunately, Everything’s Trash, the newest sitcom on Freeform, joins this club of painful podcast performances. Starring multi-hyphenate Phoebe Robinson, the show follows her character’s trials and tribulations living in Brooklyn, trying to make it big through her podcast, all while striving to be her authentic self. As her brother Jayden, played by Jordan Carlos, begins a run for political office, her normal hijinks take on larger consequences, leading to a need to grow up and fast.

Her authentic self is rather flawed, but not in the one-life-lesson-per-episode way. She just remains problematic. She’s consistently putting herself into situations she knows are wrong and, what do you know, always ends up getting into trouble. As a rule, this isn’t a bad thing to watch as a viewer. Hilarity does ensue (having a food delivery robot bitterly chant in Phoebe's direction is such a 30 Rock-style, nutso joke that it had me rolling), but the repetitive nature of the episodes does start to take a toll. Add in the shoved in podcast scenes as a way to summarize the upcoming plot points or state musings on “what we’ve learned” over the past 22 minutes, and you have yourself a sitcom that can’t decide what it has to say.

It’s a bummer, as Phoebe is electric on screen. Her effervescence makes you want to FaceTime immediately, share some gossip, then make drink plans for later that night. Her friend Malika, played by Toccarra Cash, is just as delightful, with their chemistry watertight from the moment the first credits roll.

The other duo, Jayden and his wife Jessie, played by Nneka Okafor, don’t have the same opportunity to have such a strong bond on screen. Due to their characters’ arcs as the more uptight go getters, they always feel detached from the story and the other characters. Moses Storm plays a Kramer-type figure who still doesn’t have a real purpose throughout the episodes I watched, but that’s not to say his presence wasn’t welcome. It just felt a tad misplaced. I’ve been a fan of Robinson for years, with HBO’s 2 Dope Queens being appointment television in my house, but Everything’s Trash leaves something to be desired. It might just end up being proof that using a podcast as a framing device is never going to work in television, or an example of how trying to create sympathy for a character that receives no consequences for their actions is hard to accomplish. Yet, what I hope it eventually ends up providing is the starring vehicle that Phoebe Robinson has so richly deserved. Everything might be trash, but I’m really hoping by the end of season one, this show can turn into a treasure.