When you think of a Disney Legend, who comes to mind?  For many people (myself included) the smiling face of Dick Van Dyke is the embodiment of what we see as Disney royalty. He is an entertainment icon of immense talent, charming personality, down-to-earth humility, and a cheerful step in his stride. 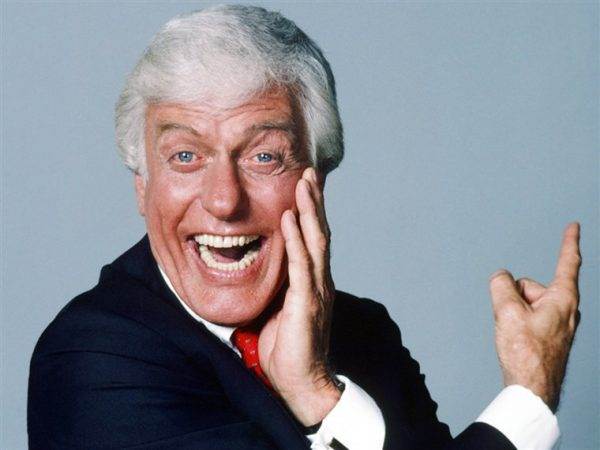 For Dick Van Dyke, the ability to entertain others has always been a lifelong passion – not just on stage, but behind the curtain as well. His award-winning career has spanned seven decades in film, television, and stage. Let’s learn more about history’s most famous chimney sweep in this edition of Disney Legends Spotlight.

Richard Wayne Van Dyke was born during the height of the Christmas season on Dec. 13, 1925 in West Plains, Missouri – the heart of the American midwest. Like so many native-born Americans, Van Dyke had European ancestry, with roots in England, Ireland, and Scotland (despite his Dutch-sounding name). But despite his European heritage, Van Dyke’s bloodline is about as American as can be. After all, his family line traces all the way back to John Alden – one of the original Mayflower crew members, and a signatory on the Mayflower Compact.

Growing up in a religious household, a young Van Dyke considered a career in ministry through the Presbyterian Church. But a high school drama class changed all that, and convinced him to become a professional entertainer instead.

In 1944 – during his senior year of high school, Van Dyke left school to join the U.S. Army Air Forces for pilot training during World War II. Van Dyke was denied several times for being underweight, and never did join the forces as a pilot. Instead, he accepted into the military as a radio announcer, and he eventually transferred to the Special Services to entertain troops in the continental United States, much like the well-established Bob Hope did in his USO Service tours. Van Dyke never formally completed his high school education (though he did receive his high school diploma in 2004 – some seventy years later).

Dick Van Dyke began his entertainment career in the late 1940s as a radio jockey in his hometown of Danville, Illinois. Shortly thereafter, he was persuaded by his friend Phil Erickson to form a pantomime act called “The Merry Mutes.” The duo performed in nightclubs across the west coast before taking their act to local television in Atlanta, Georgia. Once on television, Van Dyke really started to get noticed. He made guest appearances on many variety shows, rubbing elbows with the likes of Ed Sullivan, Dinah Shore, and Jack Paar. 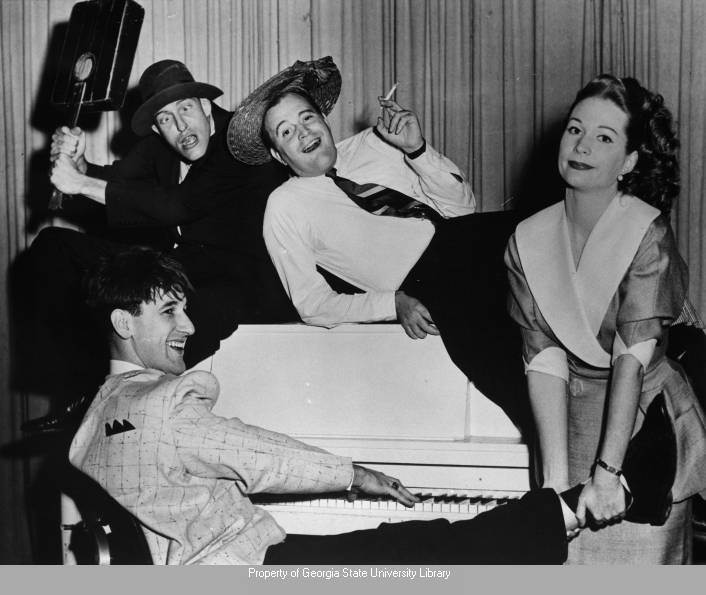 Van Dyke's first network TV appearance was in 1954 on Chance of a Lifetime. Other early television appearances included The Phil Silvers Show, The Pat Boone Chevy Showroom, and

Van Dyke continued to broaden his horizons, breaking into theater. He made his Broadway debut in 1959 with The Girls Against the Boys, but his breakout stage role came in 1960, when he played the lead role of Albert Peterson in Bye Bye Birdie. Van Dyke won a Best Actor Tony Award for his role in the musical, and his performance with leading lady Chita Rivera added “Put On a Happy Face” to the great American songbook.

On Top of the World

Following his splash in the theater world, Van Dyke was approached about playing the lead character in a CBS television sitcom. The Dick Van Dyke Show – with Van Dyke playing leading man Rob Petrie – delighted audiences from 1961 to 1966. The series made him a household name, and cemented his charm as the neighborly, goofy, funny man. Complementing Van Dyke was a veteran cast of comic actors, most notably the 23-year-old up-and-coming Mary Tyler Moore, who played his wife Laura Petrie. During the show’s seven-year run, Van Dyke won three Emmy Awards as Outstanding Lead Actor in a Comedy Series, and the series received four Emmy Awards as Outstanding Comedy Series. Success was starting to follow Dick Van Dyke with every project he joined. So of course, at the height of his television success, Van Dyke embraced the world of motion pictures. In 1963, he reprised his role as leading man Albert Peterson in a film adaptation of the musical Bye Bye Birdie. But it was his next film role that would forever land him in the hearts of Disney fans worldwide.

Walt Disney’s 1964 adaptation of the P.A. Travers book series Mary Poppins cast Van Dyke in the mysterious, mischievous, and delightful role as Bert – a jack-of-all-trades remembered by most as a cheerful chimney sweep. Van Dyke’s Bert acts as the film’s secondary hero supporting the film’s eponymous (and beloved) nanny, played by Julie Andrews. As Mary Poppins and Bert, the duo shared a chemistry that appealed to multiple generations in the 1960s, and continues to appeal to new generations today. Of course, the impeccable Sherman Brothers music had a bit to do with the film’s success as well. 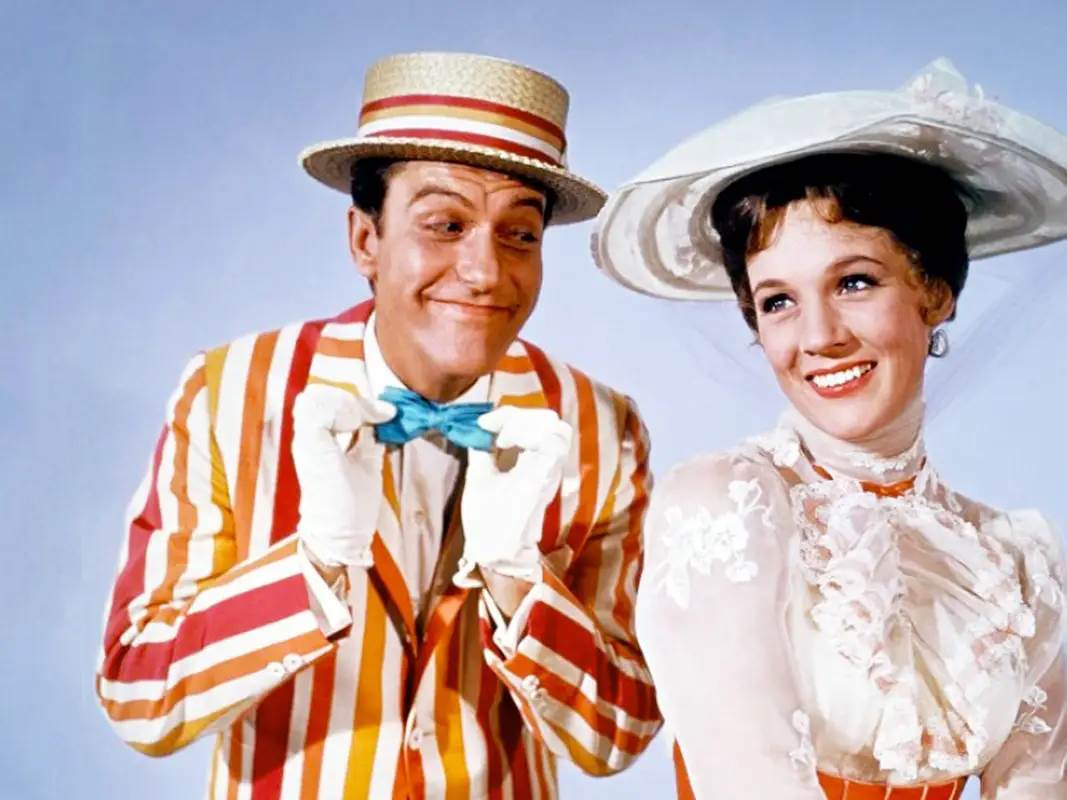 Fun Fact: Did you know Dick Van Dyke also played a smaller secondary character in Mary Poppins? Van Dyke was thrilled with the role of Bert, but he was intrigued by another character – Mr. Dawes Sr., head of the Fidelity Fiduciary Bank. At first, Walt wasn’t interested in Van Dyke playing a second part. But according to Dick Van Dyke himself, he greased Walt’s palm to the tune of $4,000 to play the part. Walt agreed, and the result is Van Dyke’s now-famous “stepping down” gag as the overly elderly Mr. Dawes, Sr. Walt found the gag so enjoyable that he had the scene set altered so Van Dyke could perform it in the film. If you are looking for his name in the film credits, you’ll find it under “Navckid Keyd”. 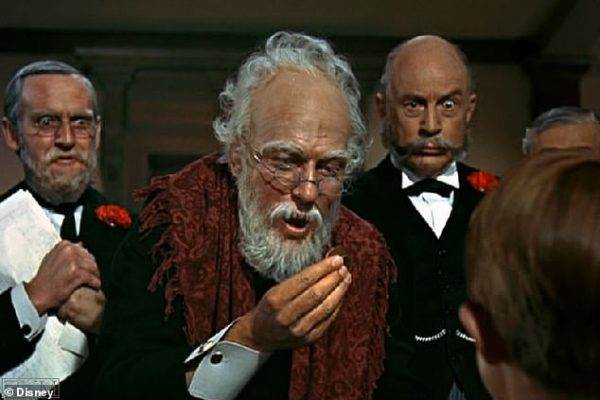 On the heels of Mary Poppins, Walt Disney immediately booked Van Dyke for another Disney role, as the title character in the 1966 film Lt. Robin Crusoe, U.S.N.  The comedy film, based loosely on Daniel Defoe's classic 1719 novel Robinson Crusoe, renders Van Dyke as a U.S. Navy pilot who becomes a castaway. The film was a far cry from the whopping success of Mary Poppins, but nonetheless was entertaining for fans of Van Dyke, who had now reached monstrous popularity in America.

Fun Fact: Walt Disney himself helped pen the script for Lt. Robin Crusoe, U.S.N. It is the only film for which Walt was officially credited with creating the story (which he did under the pseudonym “Retlaw Yensid”).

The next famous Dick Van Dyke role – which many mistake as a Disney film – is that of Caractacus Potts in 1968’s Chitty Chitty Bang Bang. The presence of Van Dyke as the leading man, along with another healthy dose of Sherman Brothers music, make this film about a flying car feel magical like many other Disney films. 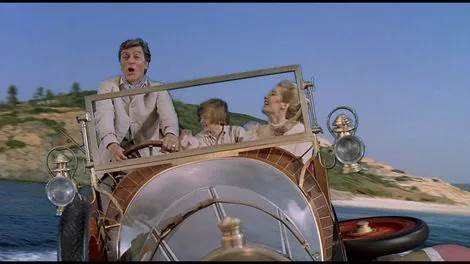 In 1980, Van Dyke appeared in the title role of Henry Higgins in the Broadway revival of The Music Man.

Van Dyke returned to Disney with an appearance in the 1990 film Dick Tracy. Other notable later career film appearances include Curious George (1990) and Night at the Museum (2006). Most recently, Van Dyke graced us with a small yet lovable role in 2018’s Mary Poppins Returns as bank owner Mr. Dawes, Jr. (who in this film was possibly even older than the preceding Mr. Dawes, Sr. in the original film.

With an established trust and love from Walt Disney and a worldwide audience of Disney fans, Dick Van Dyke became something of an unofficial ambassador for the studio in the 1980s.

Van Dyke gave the world a sneak peek into Epcot Center in 1981’s Walt Disney: One Man’s Dream. In 1984, Van Dyke was the host of a 50th birthday television celebration for our favorite grumpy duck, Donald.

In one of the great honors of his life, Van Dyke was the primary presenter of a 1986 ceremony to posthumously induct Walt Disney into the Television Academy Hall of Fame. Van Dyke – joined by Mickey and Minnie Mouse – presented the award to Walt’s wife Lillian.

In 2001, Walt Disney Studios distributed a documentary Walt: The Man Behind the Myth. Dick Van Dyke narrated the production, which also featured personal accounts from many others who knew Walt or worked with him.

An a cappella enthusiast, Dick Van Dyke has sung with his group called "The Vantastix" since September 2000. The quartet has performed on Larry King Live, The First Annual TV Land Awards, the national anthem at three Los Angeles Lakers games (including a nationally televised NBA Finals performance on NBC), and Disney’s own D23 Expo. In what feels like a match made in heaven, the Barbershop Harmony Society made Van Dyke an honorary member in 1999.

With such a long and successful career in entertainment, it’s no surprise that Dick Van Dyke is well decorated with awards. In total, he is the recipient of five Primetime Emmy Awards, a Tony Award, and a Grammy Award. He was inducted into the Television Hall of Fame in 1995, and named a Disney Legend in 1998. In 2013, Van Dyke was given a Lifetime Achievement Award by the Screen Actors Guild and was honored at the Kennedy Center. He also has a star on the Hollywood Walk of Fame.

Always giving credit where it is due, Dick Van Dyke has often cited Stan Laurel, Buster Keaton, and Carl Reiner as his idols who all had heavy influences on his career in entertainment. In an amusing anecdote he shared with talk show host Conan O’Brien, Van Dyke recounted that he once called Stan Laurel to admit to him that he had stolen material from him over the years. Laurel simple replied, "Yes, I know".

The list of entertainers who have cited Van Dyke as influential to their careers include comedy legends Steve Martin, Chevy Chase, Conan O'Brien, Jim Carrey, and Bryan Cranston. I would say Dick Van Dyke is in pretty good company. 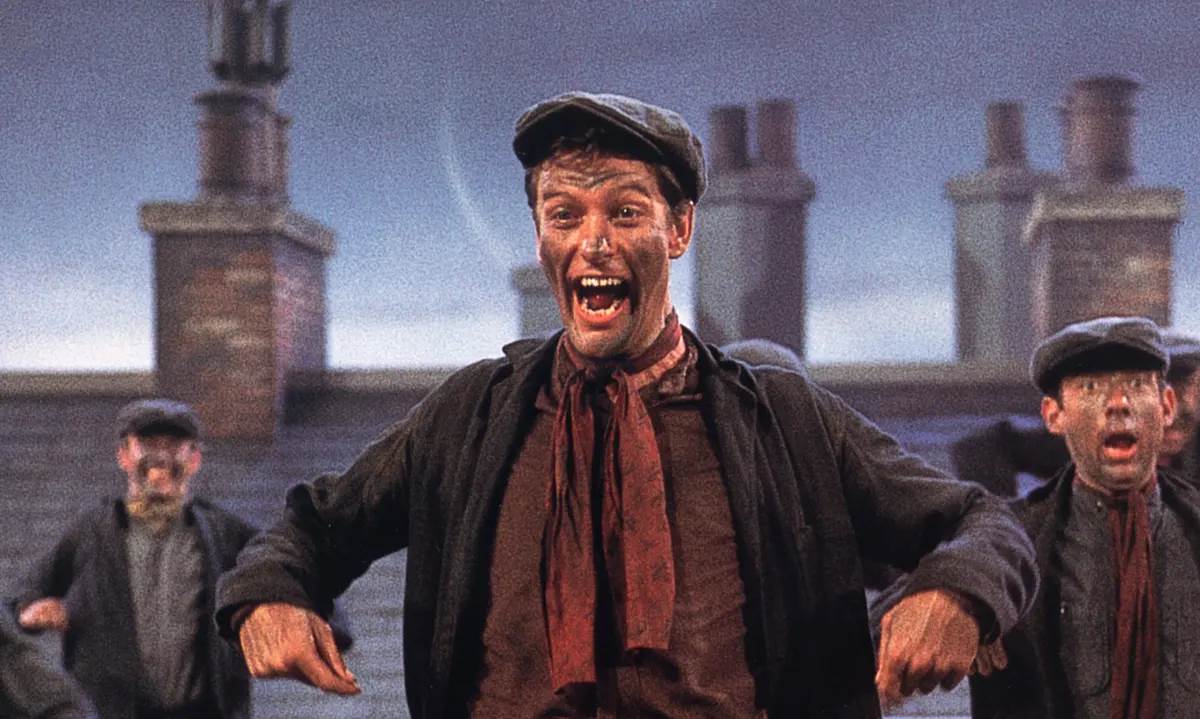 There’s a saying that goes something like this: “A flame that burns twice as bright only burns half as long.” While this may be true for many, it is certainly not the case for Dick Van Dyke. The legendary entertainer has been gracing the entertainment world with his smile for some seventy years, and counting. At 96-years young, I don’t doubt that he still has a few kicks in his eternally spritely step.

Show Dick Van Dyke some timeless love here with a comment, or find us on social and start a conversation.

Check out more Disney Legends in our spotlight collection.

My Lucky Life In and Out of Show Business: A Memoir – Dick Van Dyke