The wait is almost over for fans of Genndy Tartakovsky’s Primal, the Emmy-winning adult animation series that premiered in 2019. “There was no delay in getting it going,” the series creator and executive producer revealed during a TCA press conference for the second season, which debuts July 21st on Adult Swim. “It just takes time to do something like this.” 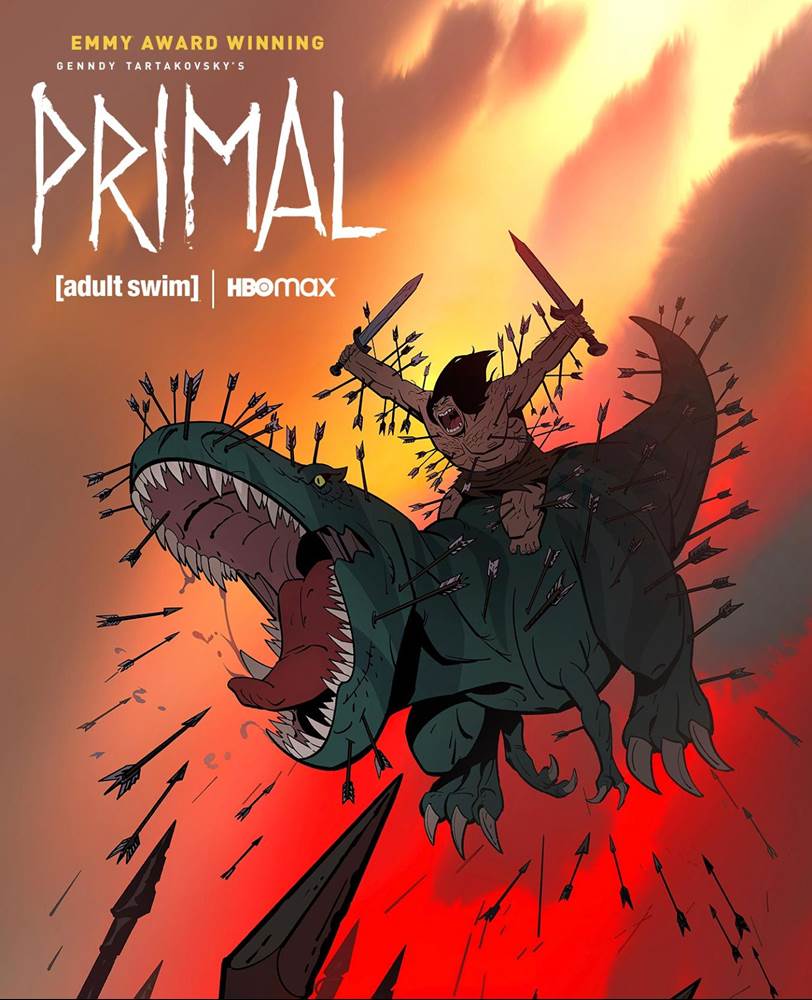 For the unfamiliar, Genndy Tartakovsky’s Primal is set in a fantasy world that merges ancient history timelines. “When there's man and dinosaur, you've kind of thrown science away,” Genndy shared when asked about the setting. “We’ve got big giant vampire bats and man bats and all these different things. It's pulp and it's fantasy, even though historically we're sticking a lot to history. We're just kind of turning it on its ear a bit.”

The series also uses limited dialogue, requiring viewers to give it their full undivided attention. “If you kind of trace back all the way back to Dexter's Lab, we would always do sequences that have no dialogue, and I think I lean towards that more,” the Cartoon Network legend explained, whose other acclaimed credits include Samurai Jack and Star Wars: Clone Wars. “I don’t know if it's because I was an immigrant and I learned English as a second language. Who knows how deep that problem goes but I think when I watch things that are more visual also and have a better reaction to it, of course, I love dialogue too but the one big surprise I think came from it was, number one, I was worried that it would be too experimental, and that wasn't the goal at all. We wanted it to be as mainstream as possible but what happened was that people started to pay attention more. It was kind of shocking because there's not a radio playing. So if you turn away, you're going to miss everything. And I think it focused people in and because this show is so intense, it drew you in more so it was a surprisingly very successful tool to make the audience pay attention. In this day, everybody's multitasking when they're watching everything, and so it was almost like getting them into a theater more.”

Since there is such little dialogue, Primal relies heavily on its musical score. “The language of the music for Primal is derived from a very organic process because it begins in our spotting sessions,” composer Tyler Bates revealed. “Genndy may beatbox a little bit of the music, but there is very rarely an existing piece of music historically that's ever been referenced. So it is really about our understanding of the emotional dynamics of the characters.” Tyler also discussed the delicate balance of not providing too much music for a show like Primal. “Because the animation style is not filling in every aspect of our imagination, we also call upon music to sort of engage similarly in the show, the syntax of why the music is actually even part of the show is very much correlated or related to the animation style. So that does factor into our choices. Like, extremely busy music would not necessarily suit this show. So every element has to be considered.”

Joining Tyler Bates as composer on the series is Joanne Higginbottom. “I think a lot of it is about not filling the box with too much,” Joanne explained about the restraint used with the score. “It's so easy to just keep adding more and more textures and more and more layers to things until it sounds so thick. But then you lose a lot of the organic quality and a lot of the emotion and the musicality of things. So it's experimenting until you find that right sound that says exactly what you want to say as opposed to finding ten that kind of say it. It is always that way with every episode of Primal. Figuring out what tools are going to say what we want to say that episode and keeping them as finite as possible.”

Fans have been waiting several years for Season 2 of Primal and art director Scott Wills shared some insight about what viewers will find when the adventure continues. “First season is more like little pocket worlds, like the witch's world and the giant bat's world. And now, Season 2, it opens up and expands. It's a wider world because the story is more like a movie cut into episodes.” With the season kicking off with a sea voyage in pursuit of Mira, there will also be less creatures than fans may have been expecting. “It’s a much more human story, the second season.”

“When we first started to break down the second season, I wasn’t happy and I  threw everything away,” Genndy Tartakovsky confessed. “We came up with something more unconventional, almost experimental at times… I’m super excited. I cannot wait for this to start to air, and I think it’s going to be very, very memorable.”

Find out why Genndy Tartakovsky is so excited for Season 2 of Primal to air starting Thursday, July 21st, at midnight ET on Adult Swim. New episodes will stream exclusively on HBO Max.