Anna and Elsa may be queens of Arendelle, but authors Jen Calonita and Mari Mancusi are queens of Disney Books’ Frozen universe, and rightly so.

Calonita and Mancusi team up to deliver an enthralling, spooky, detective-like adventure lead by Anna and Elsa in Polar Nights: Cast into Darkness. I have previously praised both authors for perfecting character traits, voices and likeness in their other Disney works, and this book is no exception. This story, however, also takes a huge leap Into the Unknown. Plus, two talented storytellers means double the fun… 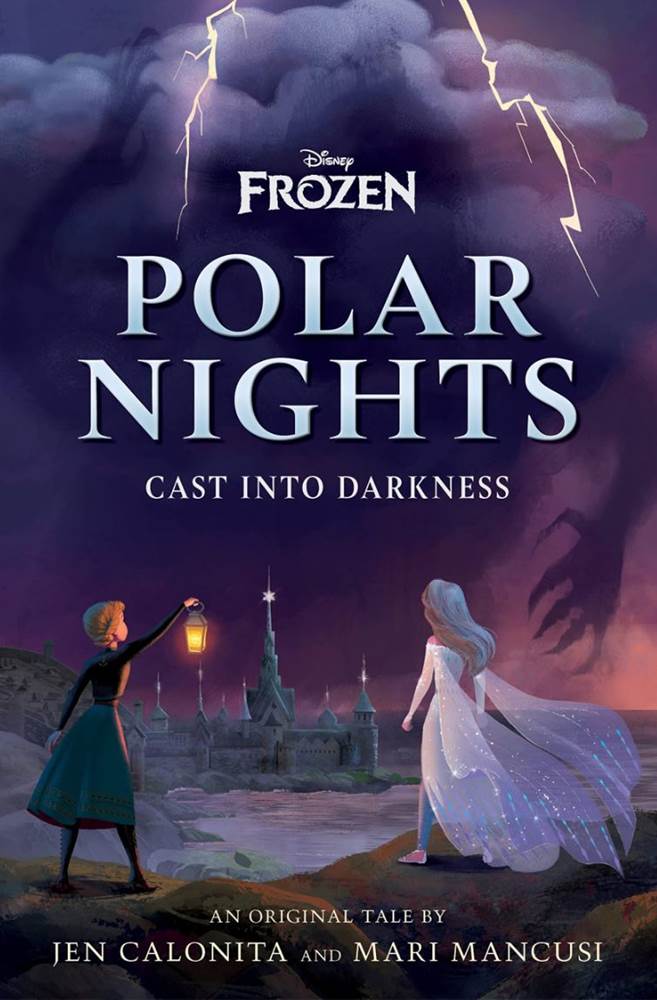 What is the Polar Nights: Cast Into Darkness about?

Anna, Queen of Arendelle, has been tirelessly preparing for the Polar Night’s Celebration that is held every year to welcome the time when the sun doesn’t rise in the Polar Circle. She has been working so hard, her fiancé Kristoff suggests she take a night off to visit her sister Elsa, the Snow Queen. Anna loves the idea. Accompanied by Kristoff, Sven, and Olaf, Anna reunites with Elsa in the Enchanted Forest.

After telling spooky stories around the campfire, Olaf swears that one of the creatures of their tales has come to life. Who else is responsible for the sudden onset of storms and the earlier than normal darkening of the skies? Why else is everyone starting to become so forgetful?

Anna and Elsa join forces to determine what is going on. Together they recall Kristoff’s terrifying tale about a princess who turned into a draugr―an undead creature that steals memories in an effort to make others forget the misdeeds it committed when it was alive. Is it possible that Kristoff inadvertently unearthed memories of a draugr, and thus unleashed the monster upon Arendelle? Anna and Elsa must uncover the real story behind the tale before everyone in Arendelle forgets who they are and is cast into darkness forever….

Polar Nights is not your typical Disney Princess story

Polar Nights is not your typical Disney Princess story. I have always loved Frozen, particularly because Disney moved away from traditional romance and toward the special bond between two sisters, but this story goes further into unchartered waters and invites readers on a journey like never before.

Polar Nights sees Disney princesses – or rather, queens – develop a new skill set: detective work. In this thriller-mystery, Anna and Elsa embark on an investigative journey to uncover the secret of why a disturbed, supernatural-meets-zombie-like creature now haunts them and threatens the safety of Arendelle. However, readers are not just in for a cheap scare: there is so much more to the story. The quest revolves around the Vesterland sisters, Inger and Sissel, and their tragic fate. The juxtaposition of sisterly relationships is artfully executed and invites readers to dig deep into the greed, lies and self-interest that sees truth and relationships get lost along the way.

Aside from the new n’ spooky elements, Calonita and Mancusi once again do a commendable job of character consistency and humor. Olaf is as “Olaf” as ever; no Frozen story would be complete without Sven sounding a lot like Kristoff, and there are several references to Anna’s love of chocolate. The laugh-out-loud jokes successfully reinforce these as the characters we know and love in an all-new story. Polar Nights is also filled to the brim with strong, diverse women with very different stories to tell. Beyond Anna and Elsa, readers are reminded of their mother, Iduna, as well as their grandmother, Rita, among vivid original characters who play key roles in uncovering the mystery. Themes of memory, truth and relationships are at the heart of Polar Nights, and while readers are reminded that “it’s good to look back sometimes”, this particular story propels forward in thoughtfully expanding and deepening the Frozen universe.

Polar Nights draws on some prior themes, characters and issues raised in both Frozen and Frozen 2 while providing a new twist to Disney storytelling. For a richer reading experience, I recommend watching both Frozen films before diving into Polar Nights if you have not seen the films before. There are otherwise some spoilers in this book which can still be understood solely in the context of this story, but the tale is more intriguing and frankly, much more interesting if you have some prior knowledge of the Frozen universe.