As it currently stands, the second-highest grossing film of 2022 is Marvel Studios’ Doctor Strange in the Multiverse of Madness. Coming off the heels of 2021’s highest-grossing film, Spider-Man: No Way Home (also featuring Doctor Stephen Strange), the blockbuster pulls together several well-established characters while also feeling like the culmination of something Phase 4 of the MCU has been building towards. And now, this multiversal epic is ready to come home with the new 4K Ultra-HD/Blu-Ray/Digital Cinematic Universe Edition. 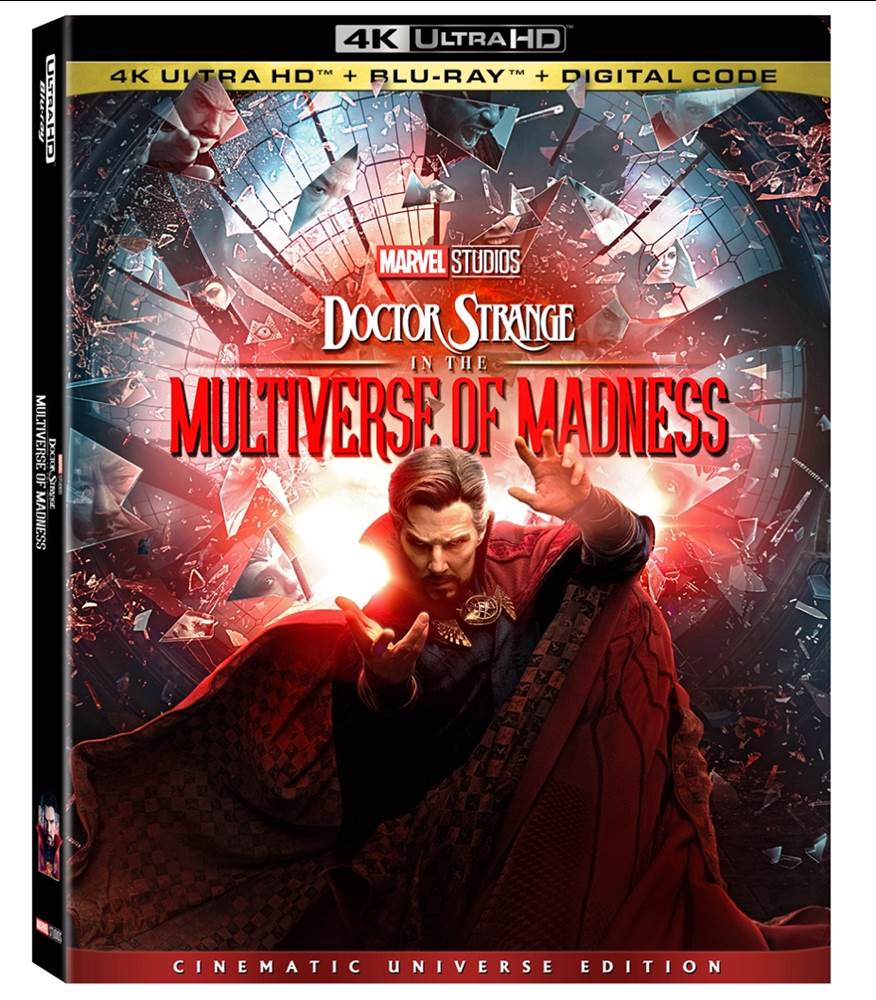 Stephen Strange’s nightmares come true when a girl he’s only seen in his dreams, America Chavez, bursts onto the streets of New York City pursued by a one-eyed tentacle creature. Seeking answers, he goes to the other most magical person on the planet, Wanda Maximoff, only to find that she’s the puppet master behind all of these strange occurrences. Seeking to jump dimensions to one in which her children exist, Doctor Strange finds himself becoming a protector to America Chavez and her unique dimension-hopping powers, coming face-to-face with himself across different universes.

Set in the aftermath of both No Way Home and WandaVision, Multiverse of Madness takes a different approach to the MCU team-up format. Rather than pairing Doctor Strange and the Scarlet Witch as allies, they become foes. And in the hands of Sam Rami, who helped shape the modern superhero genre with his Spider-Man trilogy, the second Doctor Strange film feels like a fresh departure from the first.

The Blu-Ray disc presents a pleasing HD transfer of the film that feels like it accurately recreates the theatrical experience in the home. The 4K UHD presentation boasts a far wider color spectrum, noticeably brighter in some areas and darker than others. However, it also adds either a higher framerate or motion smoothing technique that creates some uncanny valley moments. Overall, the 4K transfer makes this big-budget production look a little cheap.

Both discs feature an English 7.1 surround track (Dolby Atmos on 4K, DTS-HD Master Audio on BD). Both mixes make full use of your home theater’s field of depth, immersing you in this strange world. Additional audio options include a stereo descriptive track, plus French in 5.1 and Spanish (7.1 on 4K, 5.1 on BD).

Doctor Strange in the Multiverse of Madness is housed in a standard black 4K Ultra-HD case with disc holders on both sides of the interior. The 4K disc has artwork while the Blu-Ray disc is Disney’s standard blue with white text. Inserts include a Movies Anywhere/Disney Movie Insiders code, a flier for Disney Movie Club, and a promo for Disney+. The initial release includes a holofoil embossed slipcover. The main menu features an animated version of the 4K box art set to Danny Elfman’s score.

Doctor Strange in the Multiverse of Madness contains significant payoffs for fans of the title character, WandaVision, and Spider-Man: No Way Home. Fans looking to go behind the scenes will find the bonus features to be on the light side, while still giving a general overview of the process of making the film. The biggest rewards are found in the audio commentary, where the filmmakers have an honest discussion about how the story evolved and filming the movie during a pandemic.