In This Fool, Julio spends his days working at a non-profit called Hugs Not Thugs trying to help reformed gang members and ex-cons adjust to everyday life. When his cousin Luis is released from prison, the world Julio has built for himself is greatly impacted by his obnoxious and irritating relative. 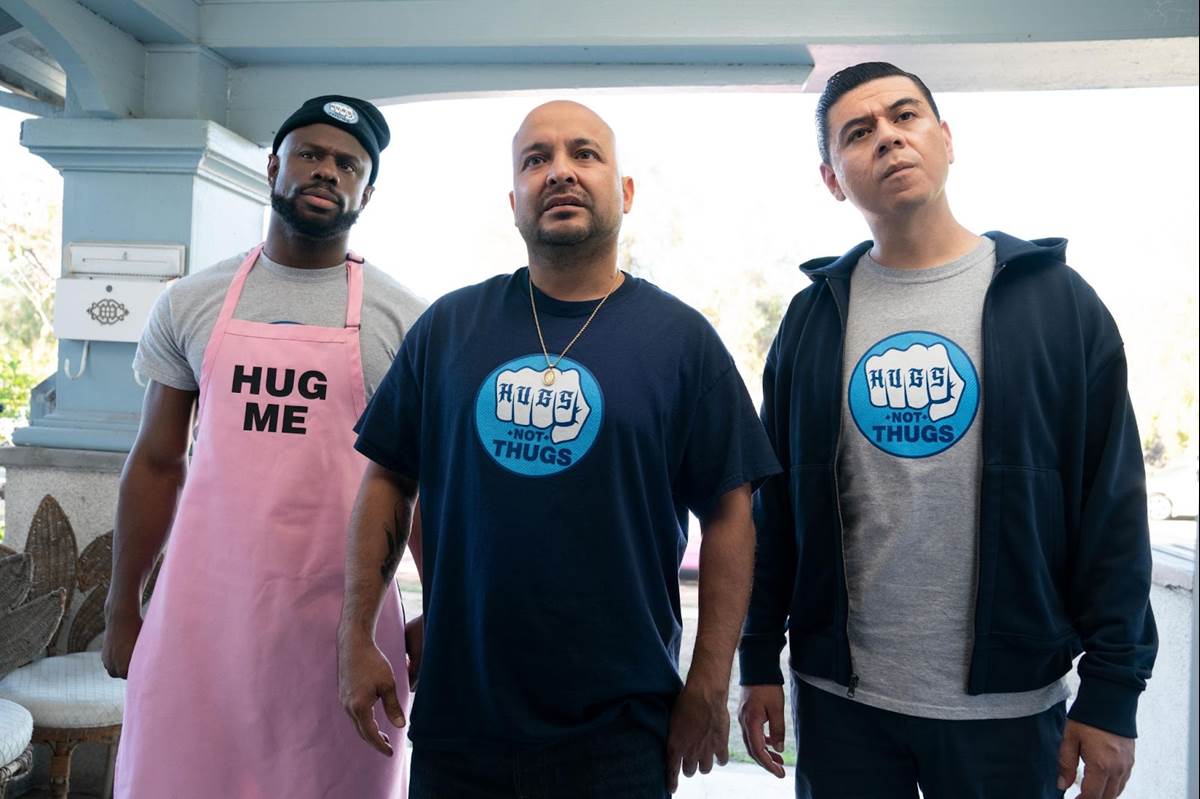 This Fool is comedy gold.  Chris Estrada spends much of his time on screen daftly bouncing from being the most miserable person on the planet, to being an incredible human being who has chosen a life of service at a non-profit. Estrada is so skilled at his timing that viewers will snort, snicker, and giggle in every scene.

Frankie Quinones as Luis is the perfect opposite to Julio. Estrada makes Julio a hard-working decent human being who is afraid to act, while Quinones makes Luis a bombastic loudmouth who is trying to adjust to life outside the prison walls.

Julio has some resentment toward Luis, because as you watch the show, Luis doesn’t have a problem being himself, while Julio struggles to be himself and not what others want him to be. The timing of Estrada and Quinones is perfection. They sizzle on screen.

While the show is based on Estrada’s stand-up comedy routine, there is more than just laughs in this rollicking joy ride. This Fool shows Julio living at home with his extended family, in a South Central Los Angeles neighborhood that isn’t riddled with gunfire every second of the day. This Fool lets the audience know that despite whatever stereotypes you have seen in past media about the area or the people, it is wrong.

Layered amongst the silliness and the humor is a tale of people, who certainly don’t shy away from reality, but humor is direct and indirect as we watch Luis adapt to life at home with his extended family. From a scan over of framed family photos including one of Ronald Reagan to the direct humor of Luis threatening to stab his nephew for almost breaking a special photo, the audience will appreciate the direct jokes and the subtle humor sprinkled around.

From Luis and Julio battling for the head of the table seat at dinner, to watching Michael Imperioli play the most unconventional minister at Hugs Not Thugs, This Fool stands out for having talented actors bring mirth and merry joy to television screens.

Julio and Luis take the battle of wits to Hugs Not Thugs, where Julio is in the dominant role, and force Luis to make the charity’s well-known cupcakes. Luis’ initial failure and then determination to best Julio at his own game allows Quinones a quick moment of range that talented actors such as himself use to the maximum. In a span of a few minutes, we watch Quinones transform from joker whose feelings get hurt to wanting to prove himself.

While this is based off Estrada’s comedy, the supporting cast is nothing short of brilliant. Imperioli gives an amazing performance and is allowed to show his power as a supporting player that is layered with doubt, lies, humor, and a will to do the right thing.

Michelle Ortiz plays Maggie, Julio’s ex-girlfriend whom Julio still cares about, but he can’t share his true feelings with her. Maggie is the opposite of Julio, and while Estrada underplays scenes with Ortiz, Ortiz dominates the language and scenery when she is on screen.

There is something waning in the days of August when television and movies seem to lack joy. This Fool is the perfect remedy to people’s end of summer decline. You will laugh during every episode. That’s a guarantee.

Hulu has done it again with this 4 Star Cupcake Bonanza of hilarity.