Tehlor Kay Mejia’s Paola Santiago and the Sanctuary of Shadows is filled with action and adventure, while also confronting generational trauma, and learning to accept the family you have. As the book begins, we find our hero Paola (Pao) training with her father Beto and the Los Ninos de la Luz. Pao has in the past had the freedom to make her own choices about her dealings with the supernatural world, but with the return of her dad, she has been locked out of the decision process. All she wants to do is find her friend Dante who disappeared into the void to the spirit realm. 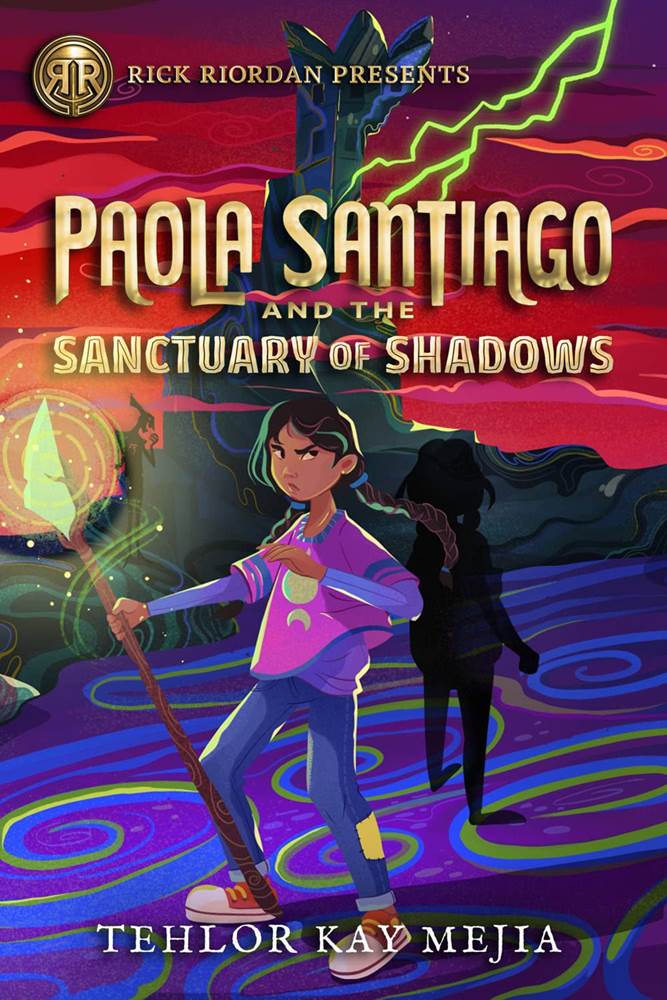 Desperate to find him, Pao is butting heads with her father, who doesn’t seem to respect all the hard work she has done and treats her like a kid. The only thing that is keeping Pao going is the friendship that she has rekindled with Emma. While her father keeps her distant from the decisions, Emma is encouraging and helps Pao hatch a plan to rescue Dante.

Even though success seems apparent, a very real battle for the survival of the world is at hand. El Cucuy, the lord of dread, known in folklore as the monster under the bed, is coming to destroy the world. Faced with a cataclysmic event, Pao, Emma, her family, and the Los Ninos de la Luz come together to save the world by winning the battle of Silver Springs.

I knew very little about the folklore behind the book series when I first read Mejia’s work, and these books have left me fascinated by the history of La Llorona and El Cucuy. What makes these villains stand out is the very real human characteristics that Mejia has given them in the book. Readers connect to the humanity of the villains thus it makes the scary parts more frightening.

Mejia has spun a fantastic tale of regret, accepting one’s family lineage, and learning to be who you are and not afraid of using the gifts that you are born with. Paola Santiago and the Sanctuary of Shadows also cements the story that Mejia began with such heart and clarity that avid readers and fans will want to go back to book one and reread the whole story again.

The conclusion to the series is all about saving the world, but the overall theme of reconciliation is evident in all of Pao’s decisions. To be successful, Pao must come to terms with her lineage, her friendship with Dante, the role her family plays, and her true feelings for Emma.

Mejia has allowed her main character to question who she is, while coming to terms with her feelings. Pao is given the time to accept herself and recognize what matters most to her. The idea of shutting herself off to the world is Pao’s core belief. However, when Pao can recognize that her greatest fears are some of her biggest strengths, she can move forward and be successful.

From accepting the lineage of being La Llorona’s granddaughter, to having the ability to travel through the void, and acknowledging her love for Emma, the moment that Pao embraces the things that scared her, the readers see the strength build inside our teenage protagonist.

It all makes perfect sense, that Pao has feelings for Emma. Who else does someone travel through a void separating the living from the dead, then for someone you love? The moment that Mejia has Pao acknowledge her feelings to Emma is not only sweet but rings with truth. There are many ways an author could have written this moment in the story, but Mejia’s skill is bringing authenticity to life, whether it’s a battle against the lord of dread or admitting to your friend that you like them.

Family lineage has always been a core component to Mejia’s series and the transformation in Pao from the first book to Paola Santiago and the Sanctuary of Shadows is a spectacular one eighty. The fear of becoming the monster under her bed has forced Pao to fight two battles at once. Pao is fighting against herself and not trusting herself, while at the same time trying to defeat El Cucuy. Embracing an inner fear is one of the toughest acts to conquer in life. Once Pao has made that transition from fearing what might happen, she harnesses a hidden power that was there the whole time.

The idea of community and the belief in community is a core strength to the story. From uniting the warriors of the Los Ninos de la Luz, to Beto learning to trust his daughter and the children he is surrounded by, to working together at the end to finish El Cucuy’s invasion, community is the heart and soul of the book. Sometimes, some of the greatest accomplishments one person will have happens when they are supported by their community. From friendship and love with Emma and her parents to Senora Mata bringing a group of seniors from her assisted living home to fight the demons, community is everywhere in this book.

Paola Santiago and the Sanctuary of Shadows does the impossible and surpasses its predecessors. There is heart, emotion, action, teenage angst, and a wicked plot twist that still has me in awe. I was not expecting what Mejia did with Senora Mata, and wow, it’s awesome.

The Rick Riordan Presents imprint continues its perfect record by releasing diverse stories from literary talents that are unmatched. One can only hope that television adaptation to Mejia’s work will be seen on screens soon.