Throughout the history of animation, there have been a number of challenges that animators and artists had to overcome. One of the main hurdles? Crowds. Typically in the background of scenes, the advent of computer animation has aided this effort greatly as the story demands it. 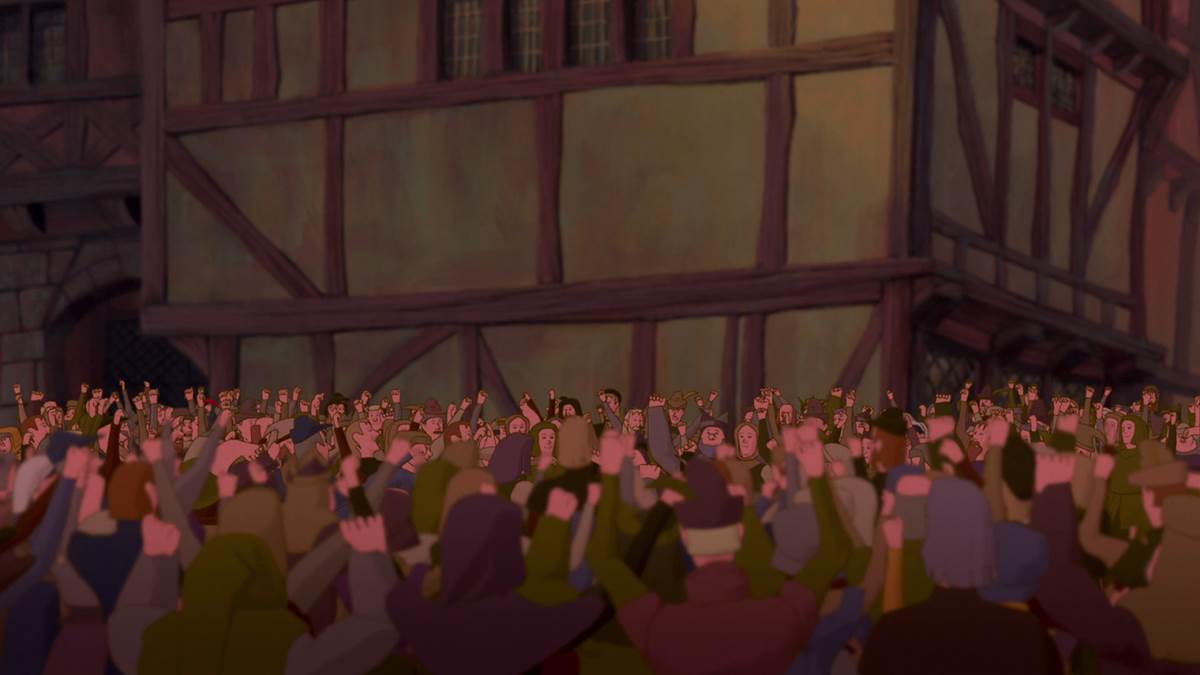 I immediately think back to the 1996 Walt Disney Animation Studios classic, The Hunchback of Notre Dame, where hundreds, if not thousands, of background characters appear during the Festival of Fools sequence. Using computers to aid in the animation of these for the first time ever in a Walt Disney Animation Studios, they appear as 2D hand-drawn characters but have a very limited range of motion compared to the stars of the film, really only raising their arms above their head repeatedly.

That was 1996. For the time, it was a phenomenal advancement. Fast forward a few years to 1998’s A Bug’s Life from Pixar Animation Studios. Fresh off the innovative and commercial success of the first full-length computer animated feature, Toy Story, the team at the studio was working on this larger-than-life view of the world from the eyes of insects…namely, a colony of ants. As told in the documentary The Pixar Story, one of the greatest challenges the studio faced producing the film was the animation of crowds.

Darla Anderson, Producer said in the documentary regarding A Bug’s Life, “So the producer goes to John (Lasseter), and says ‘John, we technologically cannot do crowd shots with more than 50 ants in them, so can you design the movie around this limitation? He said ‘I'm willing to accept that if that’s all you can do but I think you guys can do better.’ So he helped formulate this crowd team…they ended up being the heroes of the movie.”

A Bug’s Life used Finite State Machines in the studio’s Marionette (or menv) software at the time, and has since come a long way. Though the technique from A Bug’s Life was kept through Cars, a new simulated crowd (where computing is done one frame at a time and the order is very important) was adopted for the massive amount of rats in Ratatouille, that featured 100-10,000 agents in a crowd.

That technique was kept around through Cars 2. It was Brave that was the first to adopt the new proprietary software built in-house at Pixar and named after the short that preceded WALL-E, “Presto.”

Presto is only in use by Pixar Animation Studios, and pushed their original Marionette software out the door. Though the software is again proprietary, Pixar has said that it was designed to be intuitive and familiar to animators who have traditional cel animation experience. The use of their own software also allows for the changing of that software’s code depending on the needs of a specific project, say, crowds!

At the time, Presto used a kinematic method (crowds that can be scrubbed around, computed history free, fast, scalable, and directable) called the Crowd Placement Editor, which worked well for up to 1,000 agents.

The Good Dinosaur had flocks of birds that were well beyond that limit, and Finding Dory also pushed the boundaries of what their software can do, so they had to branch out and use a simulated method in a program known as Houdini, using custom built crowd software they called MURE. This method allowed for anywhere between 100 and 100.000 agents.

That brings us to today, where Pixar has introduced the Presto Crowds Foundations tool into their cannon, developing a new (and incredibly fast) system that is directly within the engine of their software that uses aggregate models (called “crowd primitives”) to provide artists and animators with directly manipulable crowds while maintaining proceduralism for mass edits. PCF can also generate up to tens of thousands of agents with nearly complete control.

At SIGGRAPH 2022, we got to see how this new system was put to the test in a crucial moment in Turning Red, in a climactic moment during the headlining 4*Town concert that took place near the end of the film. Taking place in the early 2000’s, a boy band concert would surely draw a concert of tens of thousands of people. Pixar, known for their great level of detail and authenticity when telling a story, knew they had to include a crowd of this size. 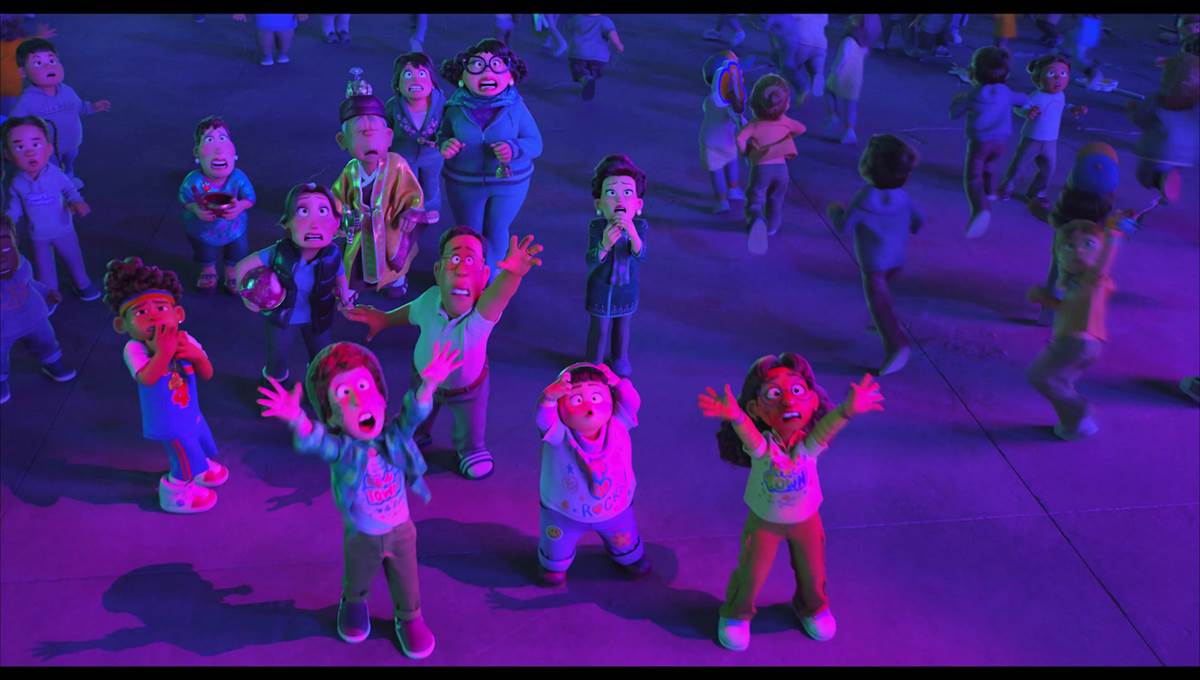 The scene is home to many of the film's technological triumphs, including a crowd of this magnitude reacting and responding to not only the hit boy band of the film, but also a giant red panda that has appeared at the concert.

Tools in the system can now give animators the opportunity to move the crowds with ease. Simple rigs can now point where the animators want their crowds to move, how they want them to react, and how dynamic they want them to be. Different packs embedded into the programming give the artists the chance to auto populate numerous figures with various individual attributes, from height, weight, wardrobe, and more. 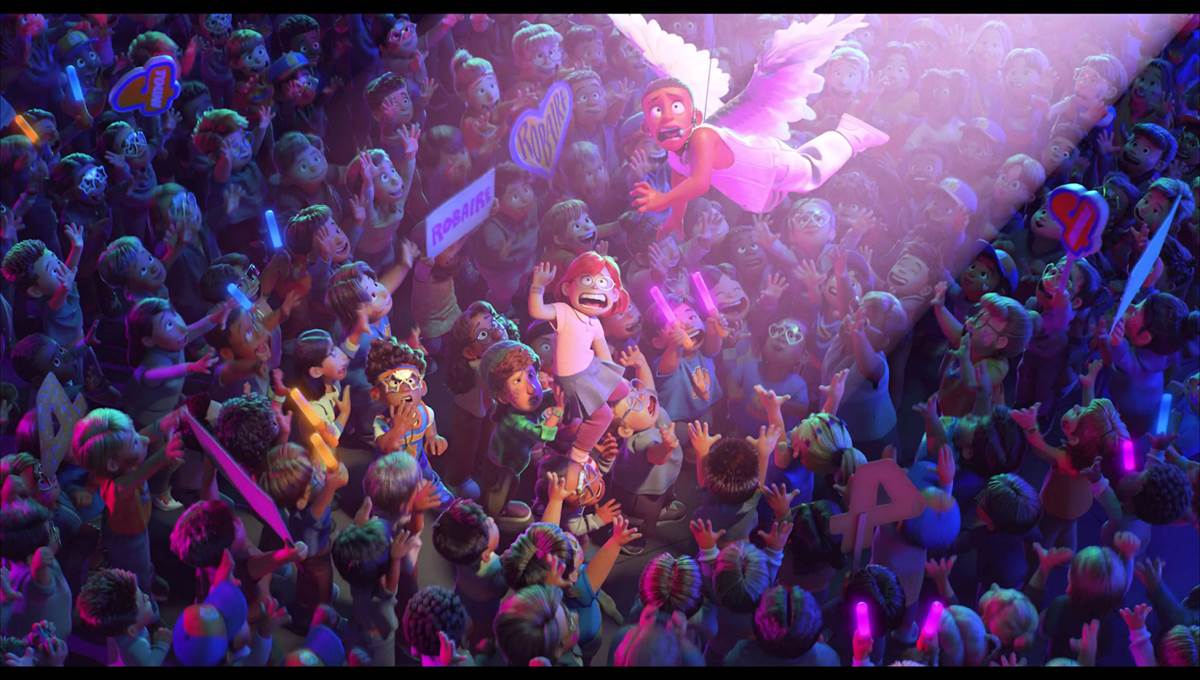 Crowd characters can also be animated ahead of time with various sets of movement and added to a library that artists can select from when they are animating their scene. Reportedly, the original crowd animation of the Giant Ming Panda that arrived at that concert showed the crowd too terrified to the point where the actual audience became too scared for that particular moment in the film. So, the artists went back to their preselects, and found some lower intensity panic motions that were pulled from crowd animation in both Onward and Incredibles 2. The note came so late in the game, that with the help of the new system, the scene took only about a day's worth of work to change. 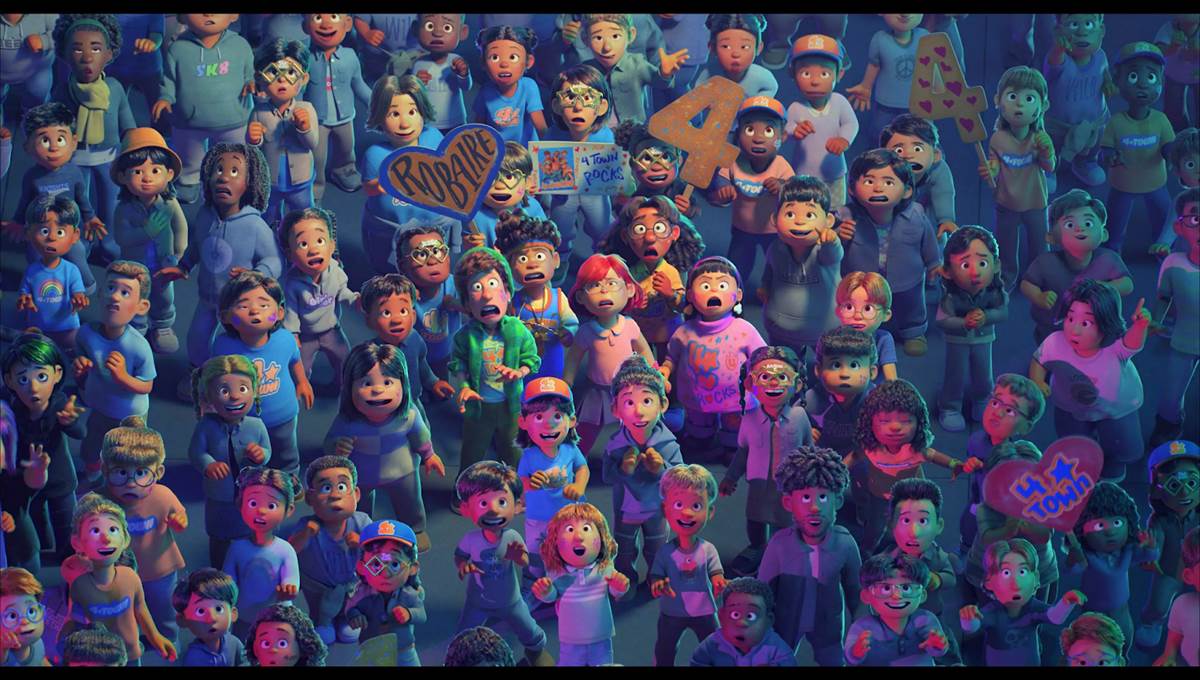 However, the studio acknowledges even with this big jump, there is still room to improve. They still want to work on de-intersection, flocking, secondary motion, and collision avoidance. Pixar still has plenty in the pipeline (we already know about Elemental), and as is usual with the studio, surely the technology will inspire the art that is to come while the art pushes the technology.

Turning Red and other Pixar Animation Studios Films are now streaming on Disney+.