ESPN and Peyton Manning’s Omaha Productions have already given us Monday Night Football with Peyton and Eli and now they’re putting a twist on the UFC. Former NFL superstar Rob Gronkowski and his family are getting in on the fun as ESPN brought us UFC 278 with the Gronks. 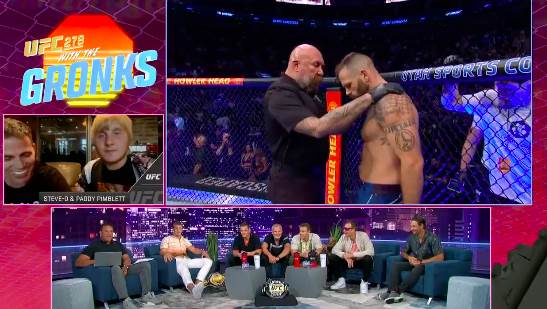 Now, just taking a quick look at this new ESPN+ product, you might assume it would be absolutely ridiculous. And you would be right. This was very much like sitting on a couch with seven of your friends and talking over the fights that are on in the background. Except now your friends are a bunch of former professional athletes and not in MMA.

The best way to describe UFC 278 with the Gronks is it’s a great way to watch the fights if you don’t actually want to watch the fights. There is certainly some entertainment value to it but rather than providing any commentary on the actual fights, it was mostly interviews and jokes being told while the fights took up a third of the screen in the corner. If you were looking forward to watching the fights, you would likely be disappointed.

Even when the panel would briefly shift their focus to the fights, there wasn’t much being added. That’s to be expected from a group of former football players who have no MMA experience. What makes Monday Night Football with Peyton and Eli so great is the context and information the two quarterbacks can add to a football game. The Gronks can’t do that for the UFC. UFC welterweight Kevin Holland was in attendance to help explain some things but his presence was not felt nearly enough. Imagine getting commentary from a bunch of guys at your local bar who remember watching Chuck fight Tito that one time. It was a lot like that.

There were also some difficulties in the production itself. The guests joined virtually and that all-too-familiar interview lag was ever present throughout the broadcast. There were moments of awkward silence broken up only by both sides talking over each other and maybe every third question would actually be answered.

That being said, it was a great lineup of guests for this broadcast. Dana White, UFC legend Chuck Liddell and current fighters Paddy Pimblett and Tai Tuivasa were just some of the guests who appeared on the show. They were set up for success and in the brief moments between the technical difficulties, it really worked. The best moment came when Dana White broke some big NFL news regarding him making a pitch that would have brought Gronk and Tom Brady to the Las Vegas Raiders a few years back before then-head coach Jon Gruden blew up the deal. Go figure, football news during a UFC broadcast.

The broadcast really hit its high points when it just embraced the craziness. Fight commentary and guest interviews are not what you want from the Gronks. What you want is them slapping each other in the face with tortillas and chugging beer out of a shoe. When things really broke down and got ridiculous is when it was the most entertaining and that was the best you could hope for.

Overall, UFC 278 with the Gronks may have been fun for casual fight fans who just wanted something to talk about and laugh at. It provided a fair amount of entertainment and got outright crazy at times. If you’re a big UFC fan though, it was probably more frustrating than anything. If you came into the broadcast expecting to actually be able to watch the fights, you were disappointed.