There’s someone bound in the closet and Dr. Strauss can do nothing but watch! This week’s therapy notes from FX’s The Patient will be a little hard to get through, but I hope you’ll stick with this recap. In Episode 4, we’ve got “Company.”

Dr. Alan Strauss (Steve Carell) wakes up afraid, staring at the door and worrying about the man Sam dragged in there last night. Through flashbacks, we see several revealing moments from therapy sessions Alan has had with Sam Fortner (Domhnall Gleeson), learning that he liked being married and that he’s a devoted fan of Kenny Chesney, a member of the country star’s official fan club No Shoes Nation and having been to 27 Kenny Chesney concerts. Before abducting Dr. Strauss, Sam told him he was a warehouse transport supervisor and when he revealed that he’s actually a restaurant inspector for the Department of Public Health, he told Dr. Strauss that he lied so he couldn’t go to the police, who would find him easily since he works in a government job.

“You said to tell you before I did it again,” Sam tells Alan when he comes downstairs. “I went there last night and I was gonna… I’ve never stopped myself in the middle before. Once I start… I don’t bring people back here, but you said to talk to you first, and so I stopped myself, and I brought him here, and I’m talking to you, but it is… it is so strong.” Alan remains calm and asks Sam to sit, trying to start a therapy session. Sam is full of rage towards the bound restaurant manager in the closet, but Alan reminds him that he’s to be focusing on protecting his mother. Sam gets up and starts pacing as Alan tells him he needs a distraction and some physical distance, instructing Sam to go to work. Sam is reluctant, but Alan tells him that calling in on the same day a man goes missing from a restaurant he inspected won’t look good. Sam grabs his coat and looks angry as he leaves. 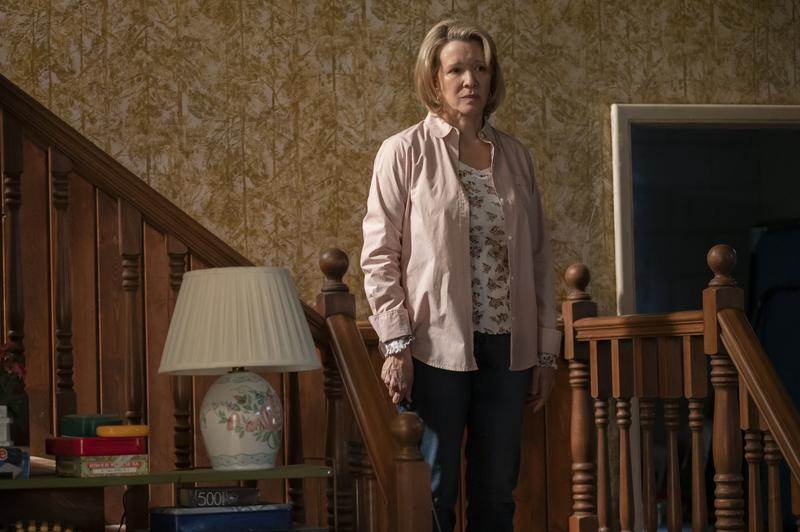 Later, the man in the closet (Alex Rich) starts begging for help. “Please, I haven’t done anything. Where am I?” Alan tells him they’re in a basement and that he’s chained to a bed and has been there a few days now. The door at the top of the stairs opens and Alan whispers for the man to stay quiet. Candace (Linda Emond) comes downstairs with a poker in her hand, looking concerned. “I think he feels terrible, doctor,” she says to Alan. “He really wanted to do what you said.” Alan asks for more information about Sam’s father, but Candace says it won’t give him any more insight into why Sam does what he does. “He was always just Sam,” she says.

Sam parks outside of his office and steps out of his truck with his large Dunkin’ Donuts coffee. His boss Mr. Donohue (Tim Ransom) and a colleague named Jeanette (Cassandra Relynn) are talking outside and Jeanette sees that Sam doesn’t have a box of donuts. He forgot that it was his turn. She tells him they won’t say anything to anyone else, motioning for him to go back and get some. During the meeting, Sam is made aware that his colleagues are tired of having Mr. Donohue read them a letter of praise for Sam’s work from a client named Gertrude anytime they mess up. Sam looks uncomfortable as Mr. Donohue reads it out loud at the meeting. 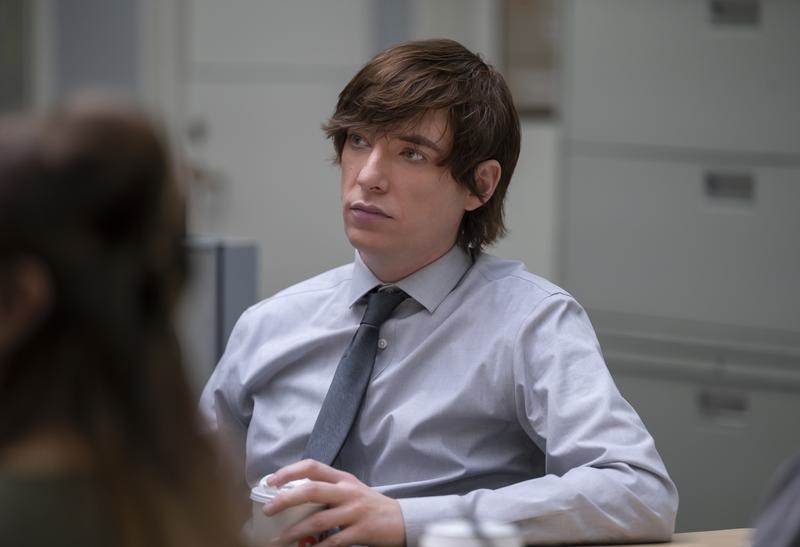 The man in the closet asks Alan who that woman was and Alan tells him it was his captor’s mother. Alan shares that he’s working on trying to stop Sam from killing both of them. He asks Alan to describe what it’s like out there since he can’t see anything or move. Alan also tells him that he’s old and not strong enough to overpower Sam, but that he believes the police are looking for him since his daughter would’ve noticed he was missing quickly. When the man asks Alan about his kids, he shares their names (Shoshana and Ezra), revealing that he’s Jewish. He adds that his wife was a cantor before she died from cancer and that he has five grandchildren. “My mom had cancer before i came back home,” the man in the closet reveals. The door opens and Candace comes downstairs with a phone. Sam is on the other end of the call, but the wireless house phone is beeping that it’s battery is low. Sam tells Dr. Strauss that he’s coming home to do it right now. Alan asks Sam to recount the day’s events for him and he tells him about the meeting and says now he’s just staring at paperwork. He says seeing his boss makes him think about how he made him go back and reinspect the restaurant for the man in the closet and he’s so angry about it. Alan tells Sam that he’s doing well and making progress and suggests that he go to the next No Shoes Nation concert. Sam snaps back that the next show is in California and he isn’t going there. The phone dies. Candace heads back upstairs. Alan sits down on the floor. “Is he going to kill me?”, the man in the closet asks, having heard the whole conversation. “It sounds like he’s going to kill me.” He asks Alan to prepare a message for his parents, and while Alan gets his notepad, he learns that the Pastitsio he loved the other night was this man’s own creation, a fusion of foods he picked up while traveling in Asia and something he made to make his mom smile when she was battling cancer. His message is short and sweet, simply telling his parents he loves them. “Is that okay?”, he asks through shaky breaths. Alan has to fight back tears as he replies, “I think that’s the main point.”

In another of Alan’s memories, we see a family dinner with Shoshana (Renata Friedman) and her kids, plus Ezra (Andrew Leeds), his wife Chava (Amy Handelman), and their kids. Beth (Laura Niemi) brings out bowls of ice cream for Shoshana’s kids for dessert while Ezra’s kids look on with jealousy. Ezra glares at his mother as he passes out slices of a bread loaf he brought to his children.

The sound of truck doors slamming makes the man in the closet ask Alan if it’s him. Alan warns him to keep quiet as Sam enters with a coffee cup and a black bag. He looks dazed and immediately stares at the door to the closet. He pulls a box out of the bag and opens it. It contains a white noise machine, and he plugs it into an outlet just outside of the door. Sam pulls out his keys and unlocks the door. The man inside begins to beg and plead for his life. “Shut up,” Sam tells him, setting down the machine and turning it on so he can’t hear his conversation with Dr. Strauss. He closes the door and locks it before sitting down with Alan. 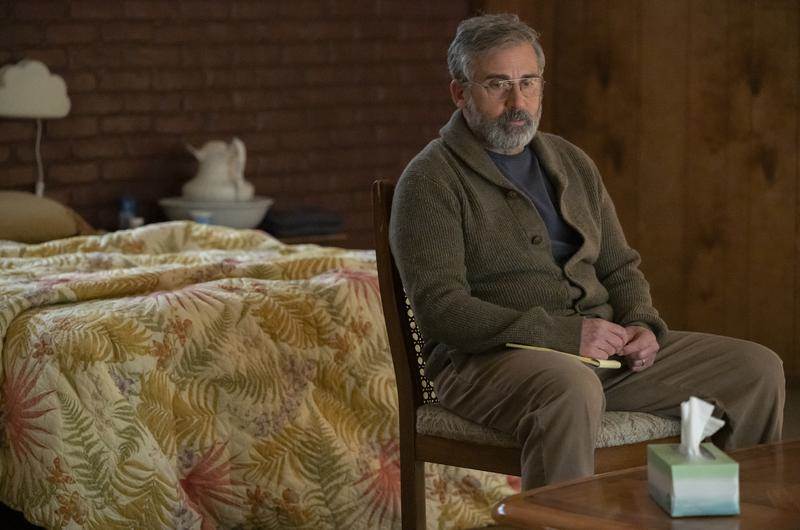 “Nothing’s working,” Sam tells Dr. Strauss, who reminds him that he hasn’t done anything yet. Sam says killing this man is all he thought about all day and the only reason he didn’t was that he didn’t want anyone to see. “It’s time,” he stands up to move to the door. Alan asks if the man saw him when he was abducted because he doesn’t remember seeing Sam when he was abducted. Sam says no and Alan suggests that subconsciously, he was trying to give himself a way out. He tells Sam that the fact that he waited for months shows that he has the capacity to control himself. He likens it to the time he quit smoking, but then admits it’s a bad analogy. Sam is almost to the door when Alan begs him to go see his ex-wife right now. “It might give you the emotional shock that moves you into a different space,” he advises. Sam seems confused, but Alan argues that anything that could help break his impulses is worth trying. Sam looks like he’s about to cry as he shakes his head, grabs his coffee, gulps down the rest of it, and goes to his room, closing the door. Alan can hear the sound of Sam using the toilet while he waits to see what happens next. When Sam comes back out, he heads towards the sliding doors to leave. Alan asks him to turn off the white noise machine. Sam looks confused, but decides to do it anyway before heading out to see his ex-wife. “I’m not doing so good here,” the man in the closet tells Alan between cries, saying he needs water. Alan starts to sing John Denver’s “Take Me Home, Country Roads” and the man in the closet tries to sing along through his tears. When they stop singing, he says “My name is Elias.” Alan introduces himself formally.

That’s it for this week’s session. Next week, Hulu will treat us to some “Pastitsio” in the fifth episode of The Patient. Here’s the agenda for the next session on September 20th.

Sam reaches out to a woman from his past. Trials loom for Dr. Strauss, Sam, and Elias. Written by Joel Fields & Joe Weisberg; Directed by Kevin Bray.