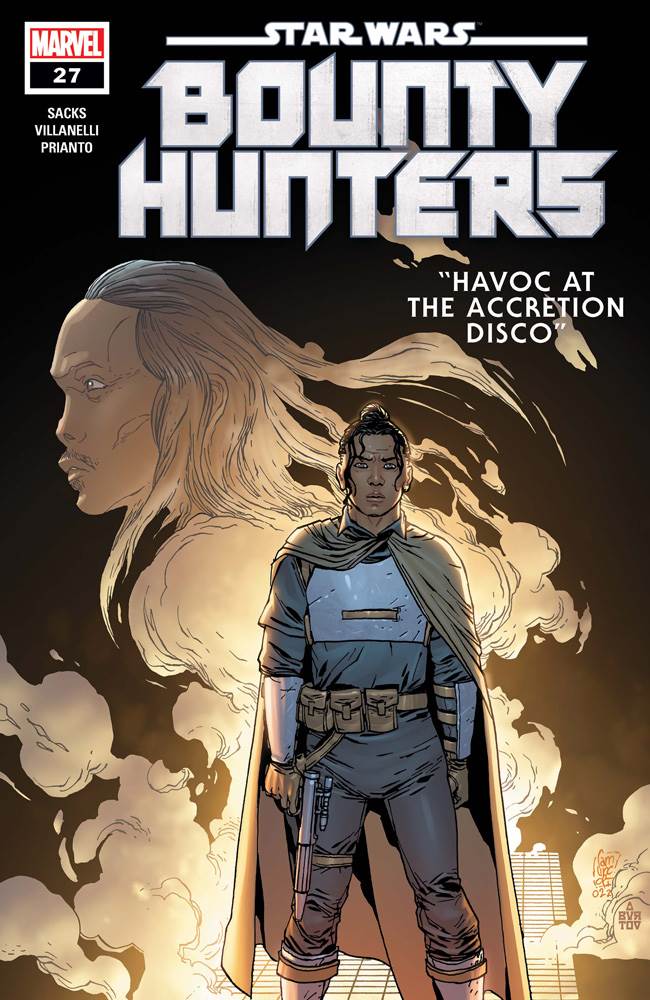 I’m finally getting what I asked for in Marvel’s ongoing Star Wars: Bounty Hunters comic book– episodic, more-or-less standalone adventures with the titular bounty hunters taking on freelance work, now that the long-running “Cadeliah” storyline has effectively come to an end.

Bounty Hunters #27, released yesterday begins with current lead character T’onga and her crew (made up of her girlfriend Losha, the Trandoshan Bossk, Zuckuss and 4-LOM, and former pit fighter Tasu Leech) having left Crimson Dawn’s flagship without accepting Qi’ra’s offer of work. 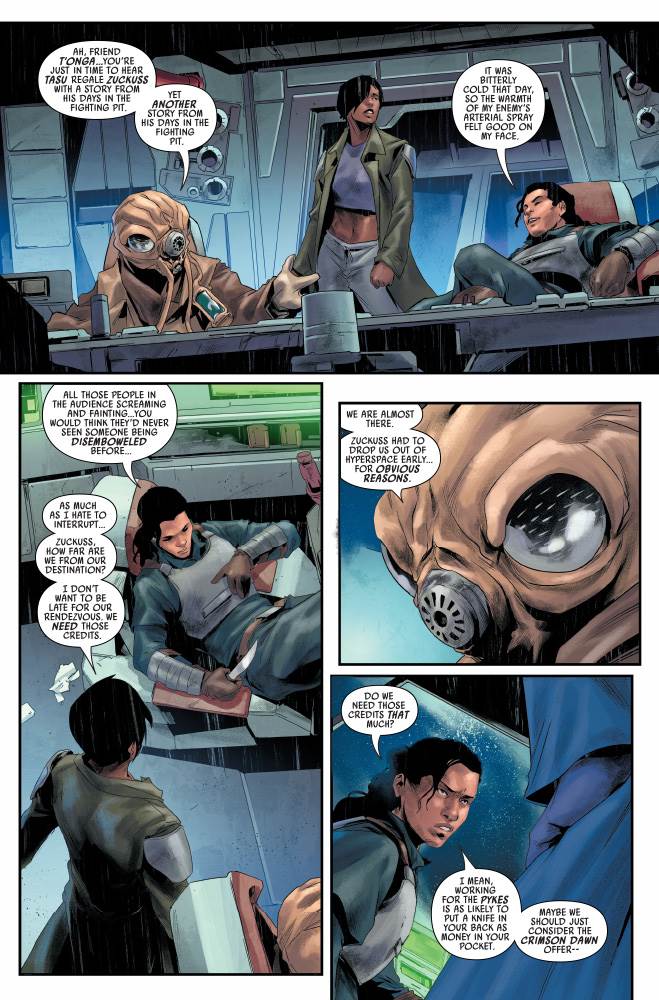 Instead, the hunters have reluctantly accepted a job working for the Pyke syndicate, namely protecting a group of partygoers from an attack by Nar Kanji assassins. Meanwhile, T’onga and Losha are having trouble communicating in the wake of their mutual failures in recent issues– Losha was unable to keep General Vukorah from escaping, while T’onga’s prolonged mission to rescue Cadeliah ended in her leaving empty-handed. We also get a cutaway to an Imperial star destroyer, where this title’s former protagonist Beilert Valance is finding himself warming up to life as an officer for the Empire. Back at the Crseih Black Hole (and the Accretion Disco space station that orbits it), T’onga and company keep watch at the party, though Tasu Leech has a valid concern about working for the Pykes. Inevitably the assassins attack, and the remainder of the issue consists of a knock-down drag-out battle sequence on the disco dance floor. 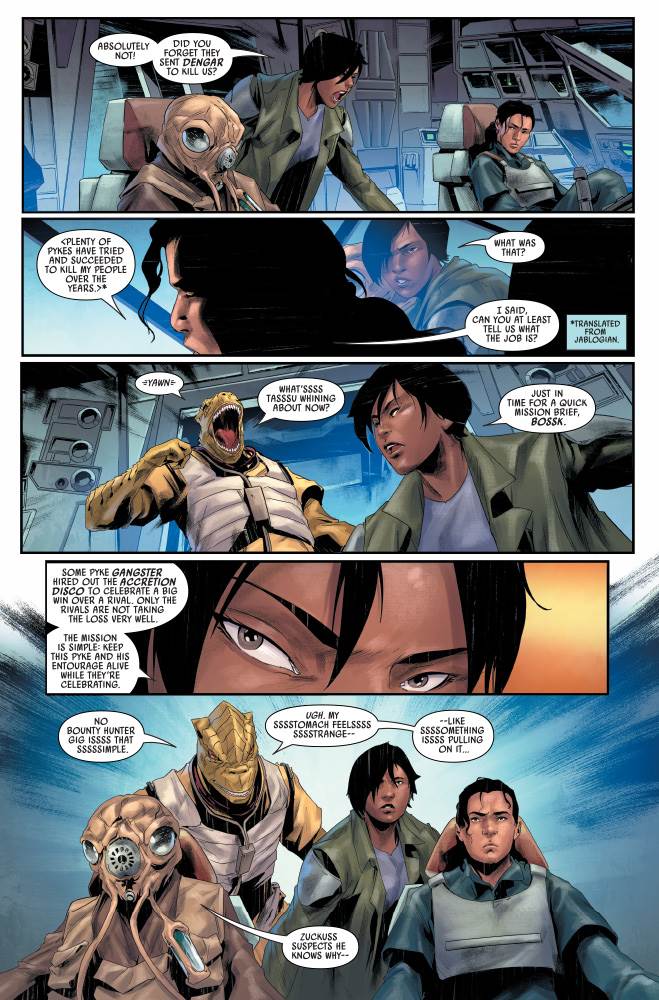 It’s a lot of fun to see how artist Paolo Villanelli (whose work is always steadily growing on me) and colorist Arif Pianto have fun with the location of this battle, with the multicolored disco lights standing in stark contrast to the bloody combat. But at the center of this issue stands Tasu Leech, whose misgivings about the Pykes are fleshed out as we learn more about the history of his Kanji people and why he considers himself at odds with his assigned task. I like than writer Ethan Sacks has chosen to provide more backstory for these characters that we’ve already spent a good deal of time with, and it’s very interesting to see how this mission plays out, ending with a somewhat shocking cliffhanger that looks as though it may pay off in explosive ways next month. I know I said I wanted more standalone stories in Star Wars: Bounty Hunters, but I also don’t mind if those stories end up spanning multiple issues. I just felt like the title had become bogged down in the seemingly endless quest to find and/or protect Cadeliah, and now that we’ve sort of moved past that, I can begin to appreciate this band of rogue mercenaries going off on a series of other adventures. 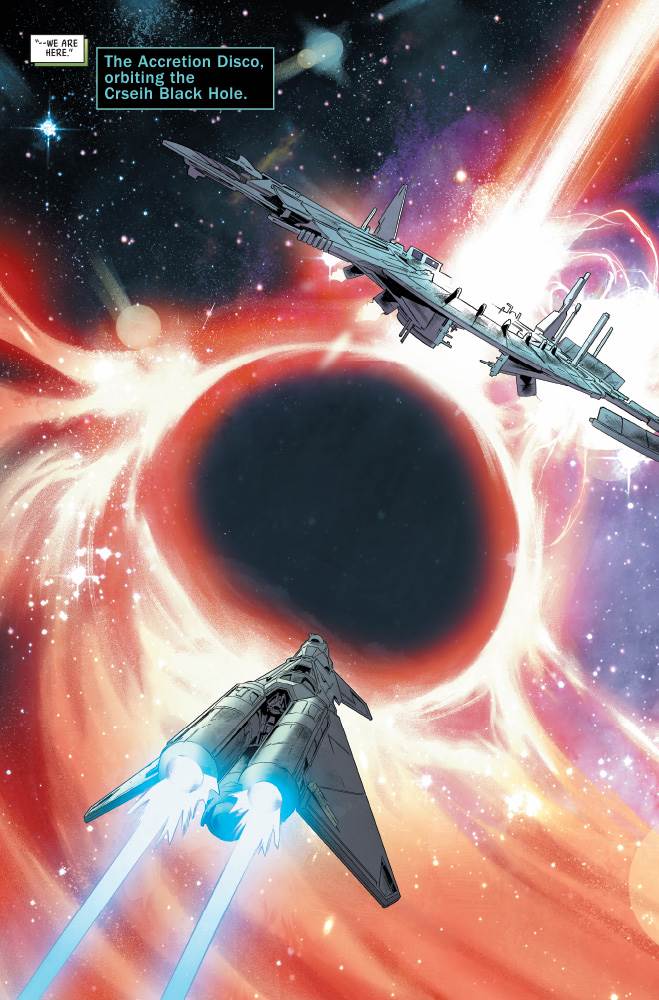