Tonight, Home Economics joined the pantheon of ABC sitcoms that have paid a visit to the Disney Parks as the Hayworths headed to Disneyland. The Season 3 opener — titled “Mickey Ears, $19.99″ (must have been pre-inflation) — not only features the Happiest Place on Earth but also picks up where the last season left off. So let’s recap. 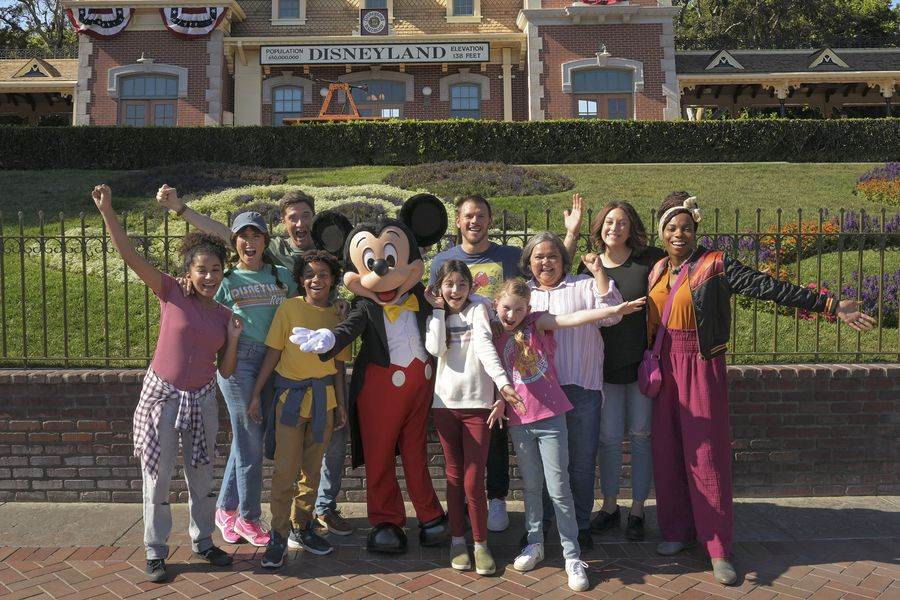 As you’ll recall, when Season 2 ended, Tom had just learned that a last minute deal from a Dutch media company had prevented his publisher from going under and, thus, also saved his book’s release. That mysterious investor? His brother, Connor, of course. With that, we begin our latest episode.

When the episode begins, our families don’t actually yet know that they’re Disneyland bound. Instead, we first see Tom and Marina preparing the kids to go over to Connor’s (including Marina “baking muffins”… by having them delivered). Similarly, Sarah, Denise, and company are also prepping for a family brunch by making way too much granola.

With the whole gang at Connor’s, Denise decides to explain how reciprocal IVF works, while using baked goods and other food items to demonstrate. Meanwhile, Sarah wants to know when exactly Connor intends to tell Tom the truth about his publisher. As it turns out, his plan was to butter Tom up by plying him with pastries from his favorite spot. Unfortunately for him, his plan hits a snag when Tom receives a frustrating phone call from his editor. We also learn the pseudonym Connor chose for his Dutch businessman: Hans Dutchman. In any case, needing to pivot, Connor announces… they’re going to Disneyland!

Cut to the Disneyland promo shots we all love. And, right off the bat, we’re greeted by one of the park inaccuracies that are necessary side effects of filming on location as the Hayworths enter the park using the large center gates. Before this happens, Marina also explains that she used the Disneyland app to create a tightly-scheduled itinerary for the family’s day. Oddly, she didn’t actually call out “Disney Genie” by name, so the synergy department will be in touch. 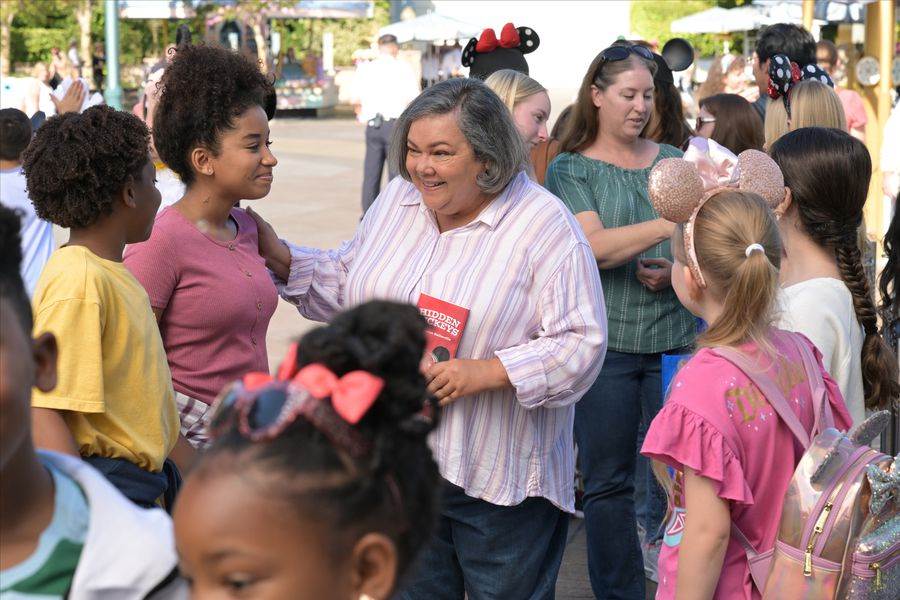 Over at “it’s a small world,” Lupe introduces the children to the world of Hidden Mickeys. Not far away, Sarah and Denise browse a number of Pride items, from onesies to Stitch plushies. During this merch browsing session, Sarah also reveals that she could get heavily discounted tuition to Windmount Academy as an employee — but she has no intention of using it.

As for Connor and Tom, they’re off on a tour of all the things Disneyland has to offer. From rides on the Incredicoaster and Big Thunder to a montage of iconic snacks and a visit to Avengers Campus, they’re clearly having the time of their lives. Oh, and Connor took Tom’s phone. But the best is yet to come for Tom as Connor takes him into Star Wars: Galaxy’s Edge.

Back to Sarah and Denise, their conversation regarding Windmount turns hostile when Denise questions why it would be such a bad thing for them to take up the offer. As tensions rise, Sarah accuses Denise of being a “bad liberal.” Gasp!

Keeping everyone on schedule, Marina and the rest of the gang arrive in Galaxy’s Edge. There, she even mentions to Lupe that she’d left room in the itinerary for a Tom on Connor fight. After Lupe proves herself to be a bad liar, Marina learns the true identity of Hans Dutcheman. With that, she confronts Connor.

Not long after the truth is revealed to Marina, Tom makes the mistake of answering his phone (which he somehow got back).. That’s how he discovers that Regina Choi is departing Choi Books. When Connor doesn’t seem too concerned about this shocking announcement, Tom lashes out, accusing him of siding with the rich guy instead of taking his side. Seeing as they’re in Galaxy’s Edge and Connor had just purchased Tom “the second most expensive lightsaber,” I’m guessing you can see where this fight leads. Indeed, after knocking Tom’s laser sword away, Connor declares: “I am you publisher” — to which Tom appropriate responds, “NO! That’s impossible!” 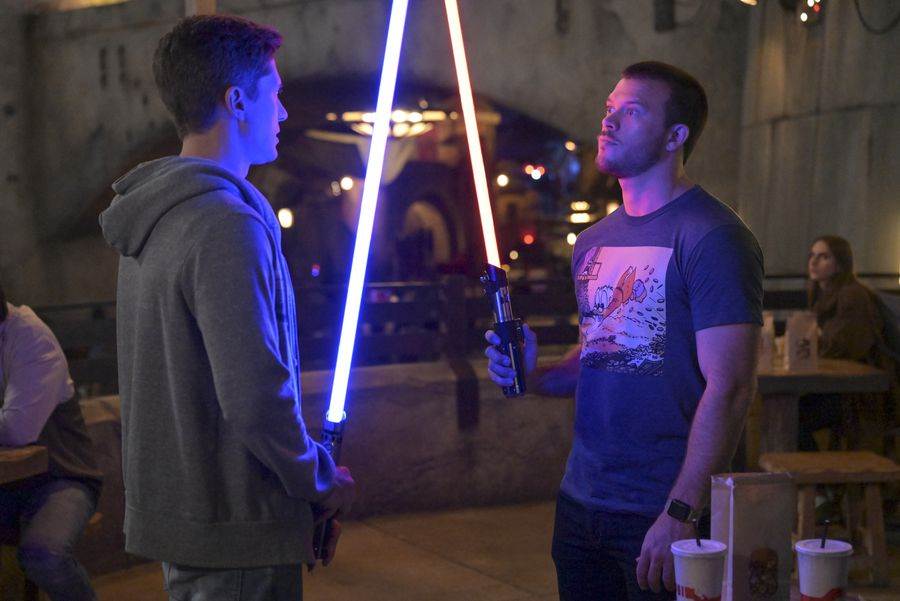 With two active fights now underway, the whole family is next seen sipping drinks at Oga’s Cantina. There, Tom and Denise mope at one table while Sarah and Connor commiserate at another. Sidenote: apparently bookings for one of the park’s most popular dining locations were very light this day. TV magic! Anyway, while some in the group seem content to just wallow in sorrow, Marina says that, while she’s willing to let go of plans to do the Mark Twain and Luigi’s Rollickin’ Roadsters, she refuses to miss Millennium Falcon: Smugglers Run.

And so, the five adults — sans kids or Lupe — head over to the land’s D Ticket. As Disney Parks fans likely know, this ride seats six, with all riders taking on a job to fly the fastest hunk of junk in the galaxy. So, to fill out their crew, a single rider named Donna (played by Yvette Nicole Brown) is assigned to join. However, as they sit around the holochess table and air their grievances, Donna has second thoughts about her position. Alas, she’s stuck with them at this point.

In the Falcon’s cockpit, Connor and Tom are pilots, Sarah and Denise are gunners, and Marina and Donna are engineers. Things get off to a bumpy start but, after an inspiring speech from Donna, the crew begins acting like a team and collecting that Coaxium!

To end their day, the family gathers to watch the fireworks from the Main Street train station (jealous!). They also take the time to squash their beefs. Sarah and Denise decide to talk to Shamiah about whether or not she’d want to go to Windmount. Turns out, she’s into it. Then, Connor and Tom apologize to each other as well. 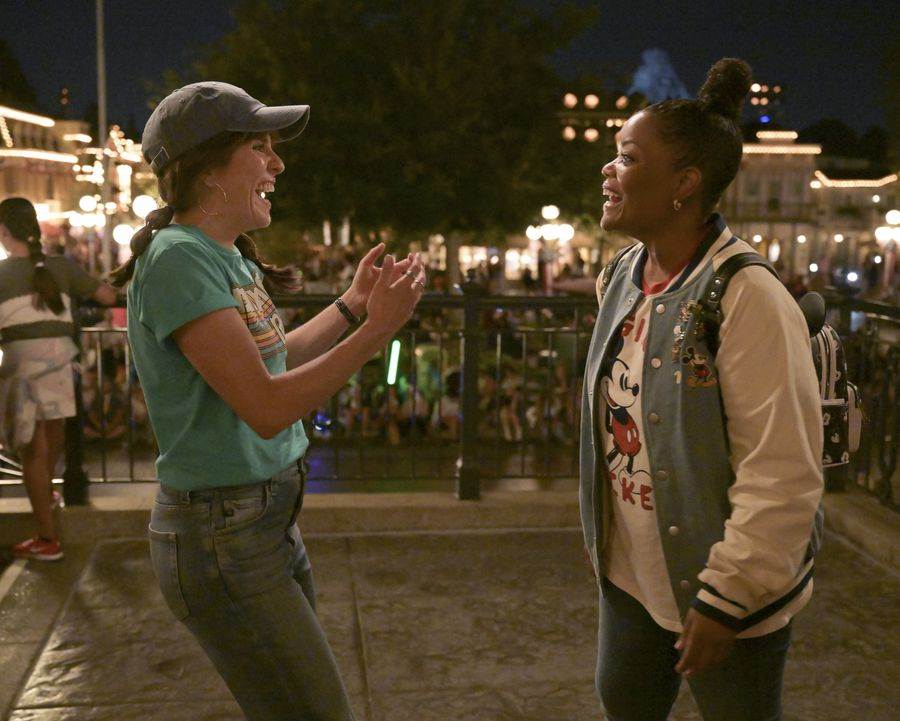 With these happy endings secured, Marina happens to spy Donna walking by as well. After thanking her for what she did, she invites her to watch the fireworks with them. As luck would have it, not a minute later, Donna’s family shows up and wonders where she’s been the whole day.

To close things out, we see Gretchen going through her favorite Disneyland purchases. Among the many, many items she acquired, she notes that she did pick up a Kylo Ren lightsaber for Lupe. So, to tag this Disneyland-centric episode, we get to see Lupe living her best life by practicing her moves with the elegant weapon.

All in all, I thought this was a pretty fun Disney Parks episode. While ripe with the same issues and tropes that often plagues these special installments, I found it to be believable enough given the world of the show. Also, the Star Wars-themed reveal worked perfectly. With that, thumbs up to Home Economics and congrats on season three!