Disney Channel is serving up tricks and treats this season with Under Wraps 2, a sequel to last year’s DCOM remake. In the first film, Marshall and his friends were working to protect their new mummy friend and safely deliver him back to his eternal slumber. But when a new mummy is awoken, Harold is once again in need of their assistance. 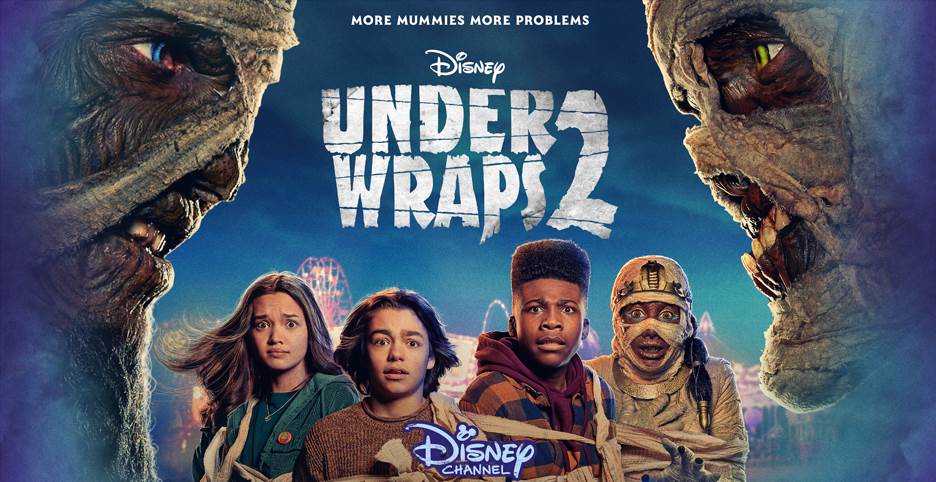 In ancient Egypt, Harold (Phil Wright) and his best friend Sobek (T.J. Storm) had a falling out over their shared love of Rose (Ryla McIntosh). Believing that Harold stole Rose from him, Sobek vowed to seek his revenge, even in the afterlife. Fast forward to present day, Sobek’s mummified remains are on display in a museum when a security guard named Larry (Jordan Conley) accidentally moves him into the moonlight, which activates the Red Jasper amulet around Sobek’s neck, bringing the mummy back to life and hypnotizing Larry to do his bidding.

This Halloween season is a busy one for Gilbert (Christian J. Simon), who has become somewhat of an internet sensation by recording himself getting scared. Amy (Sophia Hammons) is even more preoccupied, not only with helping edit the “Gutsy Gilbert” videos, but also with planning the reception for her dad’s Halloween wedding. This leaves Marshall (Malachi Barton) feeling left out and missing his mummy friend Harrold. So when he learns that Sobek is on his way to try and kidnap Rose, it creates a bittersweet reason to wake Harold up.

Under Wraps 2 may have a legitimate villain this time around, but things remain tame in this TV-G film. Sobek is differentiated from Harold and Rose by having a jeweled patch over one eye, but isn’t any more frightening than they are. Jordan Conley hams it up as Sobek’s enchanted communicator, taking any menacing edge off the character. And with the backdrop of a Halloween festival, there’s some Hocus Pocus style fun with lots of mummies roaming the streets (or people dressed like them), making it difficult for Sobek to find Harold and Rose after they leave their coffins.

Director Alex Zamm returns to lead the project, which carries over a consistent tone from the first film while also setting itself apart. There are elements of a rehash in that the kids are protecting Harold again, but the reasons are different enough that it feels new again. The film also takes a bold step for Disney Channel, which referenced Amy’s same-sex parents in the first movie, but introduces her “Pop” (Claude Knowlton) and his fiancé Carl (Antonio Cayonne) in the sequel, which includes their wedding.

Under Wraps 2 explodes with tricks and treats this Halloween season. For parents who grew up with the original film, one of the biggest surprises is a not-so-insignificant cameo from a member of the 1997 DCOM’s cast. But most importantly, the film does its job of entertaining today’s youth, telling another important story about what it means to be a true friend.