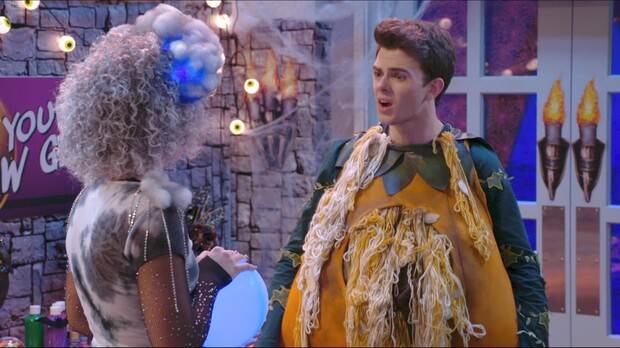 Jake and Amy are on the couch and they just finished watching It’s the Great Pumpkin, Charlie Brown, which Amy called “a waste of time.” Hartley comes over to share her excitement for Halloween her favorite time of year. She wanted to make their first Halloween special, so she decorated the outside of their home. Hartley mentions that she wants them all to feel the Halloween spirit just as Eva arrives holding a glowing blue orb. It just arrived in the mail and it talks, saying “Hello my lovelies.”

The orb contains Eva’s mother/Amy’s grandmother, whose power is the ability to body snatch anybody or anything. She doesn’t have a body of her own and sealed glass is the only thing that can contain her. In a flashback to Centropolis, we see the event that led Kraniac to imprison her, when she was bouncing between all of their bodies. It appears to cause them pain each time she enters and leaves a body.

Before Hartley leaves, she reminds the family that they’re all invited to her Halloween party tomorrow. Amy worries that she won’t have any fun, so she goes to the secret lair to look through her dad’s devices to see if there isn’t something she can bring to ensure she has a good time. Her grandma was put down there in the orb, who taunts her while she searches. Amy is interrupted when Jake and Hartley come downstairs (Jake is pumpkin guts and Hartley is a sun). Hartley asks Amy not to bring any of her dad’s devices, seemingly knowing what Amy was looking for. She promises to be on her best brehavior, but when they leave, grandma starts talking again. “I’ve missed spending time with you. And how much damage can I possibly do in this thing?” Amy agrees to bring her grandma to the party, saying she will tell people it’s a haunted crystal ball.

Vic and Eva dressed as a vampire and a witch and were all set to go to Hartley’s party when the doorbell rings. They receive their first trick or treaters, but they don’t understand the concept. Instead of treating the kids, they vow to trick them if they don’t give them their candy. Colby dressed up in his villain outfit Flashform since he didn’t get his powers until they moved to Valley View, so nobody knows his villain form. He was going to go trick or treating, but since the candy is now coming to them, he decides to stay home.

Hartley’s party has begun and she gives Jake a tour of all of her activities, including a make your own snowglobe station. Amy arrives dressed as a dark cloud holding the glowing orb. Jake is upset that Amy brought grandma and when Hartley comes to say hi, Amy tries to pass her to Jake. He tries to avoid taking the orb and it drops. Grandma’s bodysnatching form is free and she floats into a prop scarecrow, which comes to life and immediately starts terrorizing other guests at the party. She is uncontrollable.

Hartley is unaware that Amy’s grandma is loose at her party because she’s been blindfolded to play pin the tail on the black cat. Amy spins her around as Jake tries to grab the wild scarecrow. When he catches her, Amy finds a pumpkin votive and tells Jake to use his super strength to squeeze their grandma into the container. It works, but because the pumpkin jar isn’t solid, she breaks out and takes over the first person she finds… Hartley! She realizes what’s happening and tries to fight, but Amy’s grandma wins and takes control of  her body. Amy begs her to leave her friend alone, but her grandma says she wants to stay and be her neighbor and spend lots of time with her. She says she’s there to stay and that Hartley is gone.

Meanwhile, Eva and Vic have amassed a ton of candy, but when it comes time to divide it, they keep all the good stuff for themselves and only give Colby the things they don’t like, raisins and black licorice. Celia comes trick or treating dressed as a grim reaper, which is what she always dresses as for Halloween. She heard that they’ve been stealing candy from children and warns that the real grim reaper will come for them if they don’t give it all back. They laugh it off and go back inside. But suddenly there are taps on their windows from hooded figures that move faster than Celia possibly could. Eva and Vic ignore it, but it only gets worse. The power goes out and they start to see phantom grim reapers in the house. Eventually, Celia and Colby come clean. They recruited other kids in the neighborhood to help teach Eva and Vic a lesson.

Amy begs her grandma to let her best friend go, saying she needs her. She offers to share her own body with her grandma instead. “Double the villain, double the fun,” grandma says as she leaves Hartley’s body and flots towards Amy. That’s when Jake cuts through with an empty snowglobe, trapping grandma inside and sealing it shut. Hartley was able to hear everything Amy said and while she’s mad, she is touched by Amy’s act of true friendship. Back at the house, Colby picks up the snowglobe and almost drops it. Eva confesses that it’s too dangerous to have her mother around and Vic is all too eager to ship her back into storage.

What do you think of Amy’s first Halloween? Or should I say “Havoc-Ween”? If you missed it, this episode is currently streaming on DisneyNow and will likely be added to Disney+ in the near future.