It’s year four of rewatching the Touchstone and Hollywood Pictures catalog, and I am starting the spooky season off with a film released by Touchstone Pictures but produced by DreamWorks Pictures. Fright Night has Colin Farrell as a vampire out to terrorize the neighborhood.

Is it any good? We shall see. 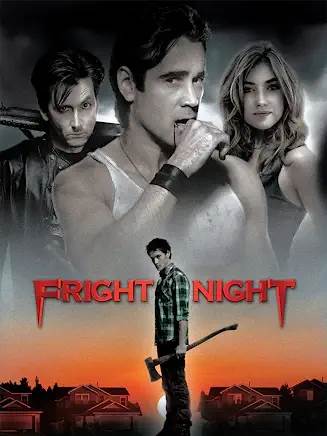 Charley Brewster lives on the outskirts of Las Vegas with his mom Jane. Together life is okay. He has a girlfriend named Amy and is a part of the popular group of kids in school. One day at school, he starts to notice a lot of students are absent, and his friend Ed informs him that his new neighbor Jerry, is a vampire.

Skeptical at first, Charley soon learns the truth and the battle of wills between Charley and Jerry has dire consequences for everyone’s safety. With the help of a supposed vampire expert named Peter Vincent, Charley is willing to go to extremes to end Jerry’s terror and save his mom and Amy.

Anton Yelchin is great as Charley. He’s charismatic, has great chemistry with Imogen Poots, and plays well off Toni Collette in the mother son dynamic. Yelchin is highly likable. He doesn’t dominate the screen, but he plays his character well and allows the audience to be as doubtful as Charley, and then ease us into the horror that has hit the town.

Colin Farrell is a great bad guy. Jerry has no recognizable human qualities, he’s soulless and monstrous, and Farrell is excellent in this role.

Imogen Poots should be in more mainstream roles. Amy is not the typical girlfriend role and that is thanks to how Poots brings her to life. Amy is a likeable character that the audience will want to survive the terror.

David Tennant as Peter Vincent is perfect. Having Dr. Who play the expert on vampires is magical. Tennant seems to be having a great time in the role, and the audience will enjoy the film more because of this commitment to the part.

As much as I like Yelchin in the role, he seems to be too old to play the part of a high school student.

Having Christopher Mintz-Plasse’s Ed tell Charley that his new neighbor Jerry is a vampire when we haven’t seen him yet, is a questionable choice. How does Ed know? Of course, it’s explained later, but I feel like there is an important scene that was cut that would have made this statement make sense in the movie.

Jerry can’t enter someone’s home unless he is invited. To get by this he pulls up the Brewster gas line and causes the house to explode. His reasoning is that if there’s no house then he doesn’t need an invite. The problem with this is that the house is still standing. The Brewster’s are still in the house, and they haven’t given their permission to enter. So, Jerry can’t come into the house, but he does.

I enjoyed the movie a lot. Fright Night is violent but it’s not grotesque. Farrell and Yelchin are worthy foes, and the story moves along at a nice pace. The movie was a box office success, but it would have done much better if it had been released in October, and not the dog days of summer. I can’t believe the film wasn’t held until the scary season.

There are plot holes galore, but Fright Night is a pleasant surprise in the DreamWorks/Touchstone agreement.

Fright Night gets a 3 Reels rating.

Next week with Halloween coming close, we revisit a true horror film. 1993’s Alive is the true story of a rugby team that crashes in the Andes mountains and must do anything to survive.